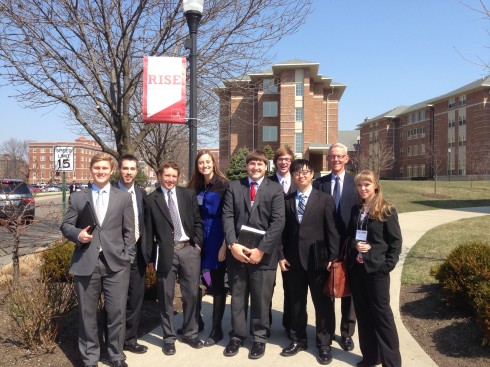 Members of STAR at the RISE Conference

You may have heard about Student Trading and Research, one of COBA’s student organizations. In fact, you may even have heard about the fact that they manage half a million dollars of ACU’s endowment.

However, you probably haven’t heard about the recent opportunity STAR portfolio managers had to attend the Redefining Investment Strategy Education (RISE) Conference at the University of Dayton.

Dr. Terry Pope, who led this trip, explained that,

“Day one comprises panel discussions with recognized experts regarding the economy and financial markets.  Day two comprises break-out sessions led by practitioners covering a host of topics of interest to the investment community.”

Whitney Stevens, a junior accounting and finance major who participated in the trip, said she was incredibly impressed with this year’s list of speakers, which included the following:

Participating in this experience had a big impact on Whitney.

“This experience allowed me to correlate what I have learned in the classroom with its practical application in the finance industry,” she explained. “The advice given by the accomplished professionals alerted me to some key areas on which to focus.  As my graduation date approaches it is exciting to know that my hard work in college is preparing me to be successful in my career.”

Dr. Pope understands the impact the RISE Conference can have, which is why he enjoys sponsoring the trip.

“I like taking the students to this conference because it presents the best collection of expertise of any conference available to our students,” he elaborated. “It also provides a great opportunity for our students to visit with peers from universities all over the world.”

If you haven’t already, be sure to check out STAR and the great things they’re doing here on campus!

Scott Orr Shares His Experiences in the Corporate and Nonprofit Worlds

Wondering whether to pursue a career in the corporate world or in the world of nonprofits? Scott Orr has done both, a story he shared with a packed room at last Thursday’s luncheon. 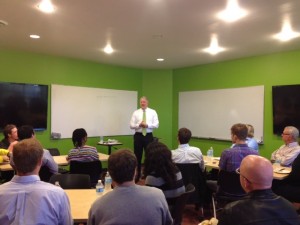 Orr, who is the Vice President of Public Affairs at Fidelity, has had a fascinating career path since his graduation from ACU in 1984. Starting out at Price Waterhouse, Orr really enjoyed his job as an accountant. However, as he spent a Sunday afternoon in a meeting after having worked twenty-four days in row without a single day off, he decided it might be time to consider grad school.

Orr was accepted to Harvard, so he and his family left their Dallas home and headed north. Through the next couple of years, Orr found himself immersed in case studies, as he learned what it took to be successful in the world of business. Following his time at Harvard, Orr planned to head back to Dallas, get into commercial real estate, and make $1 million dollars. 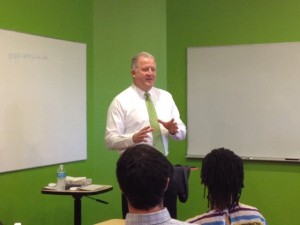 However, God had other plans.

Once the housing market plummeted, Orr realized he needed to enter into a different field, prompting him to take an internship with Fidelity that turned into an analyst job where he worked with government and municipal funds. For the next nine years, Orr worked at Fidelity and loved the work he did; however, he and his wife began to grow concerned that they weren’t involved with a healthy church where their children could grow up. Additionally, Orr was beginning to wonder whether or not his career was making a difference in the lives of others.

“I just thought, ‘I’m not doing much for the world,’” explained Orr.

In light of these concerns, Orr quit his job in 2000 and moved back to Texas with his family. In the metroplex, Orr enjoyed a couple months of retirement, during which time he began volunteering at the local food pantry. Through this process, Orr ended up on the food pantry’s board.

From there, he was asked to join an organization that worked with adoption agencies and provided ministry to mothers who had given their children up for adoption. He remained with that nonprofit until he felt that he had helped grow the organization as far as he was able to under the direction of his board at that time.

Once Orr resigned, God once again intervened, this time providing him with a job offer to be the president of Christian Community Action.

Because CCA was significantly larger than the nonprofit at which he had previously worked, Orr’s role was completely different. At his first job, Orr had done everything. At CCA, Orr had a staff, which he was able to use very effectively due to his new-found understanding of the non-profit world as a whole. Orr eventually left CCA and was delighted to return to Fidelity, where he was hired to be the Vice President of Public Affairs.

In this role, Orr has been able to find the best of both worlds. He is still able to effect change, but he doesn’t have to do the draining work of eliciting funds. In addition, he gets to spend a great deal of time working with the government to change legislation, as well as being responsible for motivating employees to volunteer in the community.

Orr would never have imagined that he would be back at Fidelity, but he is incredibly thankful for where he is now, as well as the journey that led him there.

“God really put these things in my path and put each step in my way,” said Orr. “Throughout this whole process God has given me the skills I need.”

Are you looking for God to guide your path?

COBA does a lot of things well, but one of the things we do best is providing students with hands on, real world experience. A great example of this can be seen in one of our student organizations, Wildcat Ventures. Created in July of 2012, Wildcat Ventures is a series of “on-campus, student-run enterprises,” as described by President Hannah Ostertag. 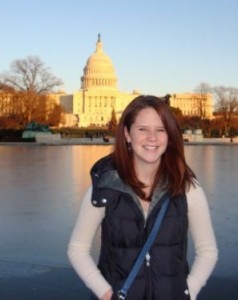 Because Wildcat Ventures is a relatively new organization, Hannah has been involved in its development as well as its day-to-day operations. As a result, she believes deeply in the organization’s purpose and vision.

“The vision for this program is to create a series of businesses that are student-run and operated, providing an experiential learning environment for students to apply concepts learned throughout their coursework,” explains Hannah. “Students in this program gain practical leadership development and business acumen through the planning, implementation, and development of student businesses on campus.”

By the Fall 2013 semester, Wildcat Ventures will have launched four different enterprises: Connections Café, a t-shirt business, a phone-electronics repair business, and a sales and distribution business.

As president, Hannah has learned more than she ever could have imagined, including the fact that surrounding yourself with talented individuals whose skills complement your own makes any task easier.

“Working at Wildcat Ventures really gave me a glimpse of what it takes to start a business,” she elaborates. “You will have to work hard, extremely hard. You will have to live and breathe your business at times because if you don’t, the tasks that need to get completed won’t get done. There will be days when the challenges and barriers to your business seem overwhelming. But when you are reminded of your vision for the project, solutions to those problems can be found and those barriers can be overcome with enough perseverance.”

Thanks to Dr. Litton, Hannah, and the rest of the leadership at Wildcat Ventures for providing this incredible opportunity.

Be sure to get involved with Wildcat Ventures and support their businesses here on campus!