Chris Kirklin, senior financial management major from Richardson, TX, has been very active on campus during his time at ACU. Among some of his accomplishments, he has served as the 2016-17 president of men’s social club, Trojans, has been part of A Cappella, and has worked in the COBA Dean’s Suite. Chris is not only an exceptional student – he is an exceptional human being. He was matched through a drive on the ACU campus to add new bone marrow donors to the national bone marrow registry. We hope when you read his story below, you’ll consider registering or giving to this organization to help save a life. 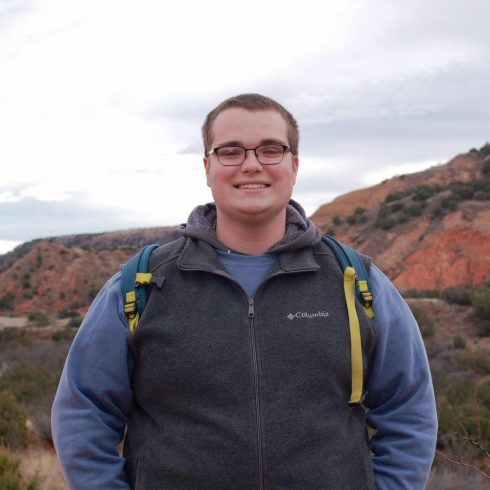 Let’s start from the beginning – how did you find out about Delete Blood Cancer and what motivated you to sign up? How did you sign up?

I have known Earl Young for several years, since he goes to my church in Dallas. Earl came to ACU to speak in Chapel about registering to be a donor in April of 2015. I remember sitting in that chapel and not paying much attention because 1) I already knew everything about his organization and 2) I was very burned out as the semester came to an end. I left chapel in a hurry and cut through the campus center to make it to class. One of my nursing friends was running the table to swab and sign up to be a donor. Selfishly, I tried to walk as fast as I could so I would not have to stop and register. But she screamed my name across the campus center and summoned me over to register. Looking back on this experience, I have realized how close minded I was. I was almost too selfish to take literally 2 minutes out of my day to register to save someone’s life. This totally changed my perspective on how I focus on “giving” to others.

How long after signing up were you contacted by Delete Blood Cancer asking you donate?

I swabbed in April of 2015, and was called in January of 2017 by the organization DKMS, which runs the Delete Blood Cancer campaign.

What was the donation procedure like? Did anything about it surprise you?

When DKMS calls you for the first time, you are listed as a preliminary match. After a lot of paper work and more detailed blood tests, about a month later I was notified that I was a perfect match for the patient. I did some more paperwork, and made a trip to the donation center to get a physical exam done, before my donation. The week of my donation, I received an injection called filgrastim, which serves to boost stem cell production so there is plenty to extract at the day of the donation. About two and a half months after I had first been contacted, I donated my stem cells. It took about 5 and a half hours to extract all that they needed for the donation.

Can you describe the pain or sensation for the couple of days after the injections and donating itself?

Leading up to the donation, I was in a lot of pain. I had the worst headaches I had ever had in my life, which prevented me from doing daily activities. I felt fatigued and achy (all from the injections). I began to get frustrated with how I was feeling, and remember having the feeling of “I just want this all to be over”. But that was not the point. None of this was about me. This was about God making it possible for someone to give life to someone suffering. None of the pain I was going through that week was near as great as my match. 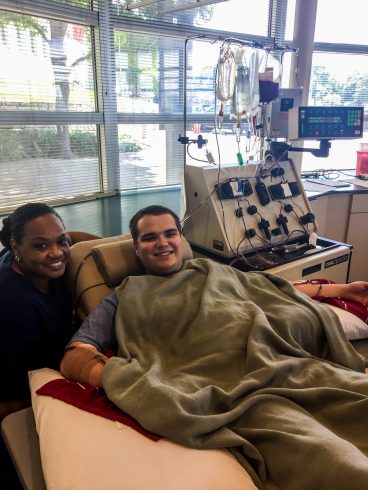 How much inconvenience did the whole process cause you?

As I touched on in the previous question, there were definitely some days where I was having a bad attitude about the whole process. But in the grand scheme of things, this was such a simple and easy process. I was able to keep on track with my schoolwork and job, all while going through the process.

How were you treated by DKMS?

DKMS does an exceptional job of treating the donors well. Every time I spoke with them on the phone or had some sort of communication with them, they were extremely helpful and thankful for my time. They provided lodging and meals for my travel expenses, and made me feel extremely prepared for the donation.

Have you met the person who received your stem cells? Would you like to meet them?

How did your friends and family react when you were asked to donate?

They were amazed and very supportive of me. I also had a few other friends that were matched as donors who reached out to me.

Was there anything about this experience that surprised you? Anything it made you realize or look at in a different light?

The most important thing I learned throughout this process is that we are called to be the hands and feet of Jesus to everyone. I still am almost “haunted” that at a time I almost didn’t register to be a donor, because none of this would have happened. This donation process made me realize that I can be extremely selfish at times, and that is not how Jesus was to others. I need to give, in any way that I can, to help further the Kingdom and glorify God. This process has changed my life in such an amazing way. I feel like I see God working in so many more ways now than I did before.

What would you say to anyone considering registering for the Bone Marrow Registry?

There is no reason that we can’t at least try to help someone in need. Less than 1% of registered donors ever get contacted, but just the fact that you are willing to be there for someone in need is so powerful. I can’t think of any easier way to save someone’s life than being a part of the Bone Marrow Registry. There are so many sick people out there who have very little hope at life, and they would cherish forever the opportunity for someone to give them a second chance at life.

Anything else that you would like to add about your experience?

I hope others read this story and are able to see that I am a normal person, who had reservations about registering, and am in no way perfect. I never would have thought that I, out of the millions in the registry, would be the ONLY match for someone with blood cancer. There is nothing to lose by registering, and you never know how God could be calling you to give, even in an unexpected way. 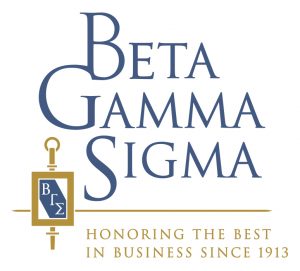 Last week, at a luncheon in their honor, COBA welcomed 32 new members to the chapter. Current BGS members and faculty encouraged the new members to continue to learn and lead with integrity, honor, and commitment to excellence.

The new members of Beta Gamma Sigma are: 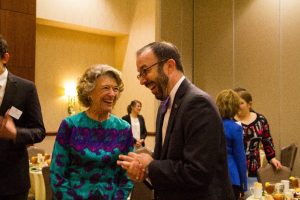 On Tuesday, March 28th, generous donors, COBA scholarship recipients, COBA sophomores, members of COBA’s Dean’s Council, and COBA faculty and staff gathered at a luncheon inspired by the memory of Ruth Allen Griggs. Ruth’s children, Jack Griggs and Ann Griggs Berger, along with their respective spouses, Ann Griggs and the late Bob Berger, established an endowment in 2015 to honor their mother and her spirit of generosity by 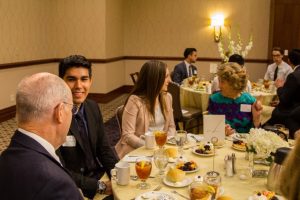 having a yearly luncheon bringing together COBA donors and students. The purpose of the luncheon is to honor and thank donors for the scholarships given to the College of Business that allow so many students to attend ACU and to participate in many of the experiential learning opportunities that COBA offers. This year, sophomore students were added to the invitation list so that they could learn what COBA values the most, particularly those ideals related to gratitude and generosity.

COBA students Georgi Hannah, senior accounting major from Kearney, MO, and Casey McMullin, junior financial management major from Colorado Springs, CO, spoke to the audience about what receiving COBA scholarships has meant to them and the impact that it has had on their education and experiences at ACU. In her speech to the audience, Georgi spoke about the many opportunities she has been able to participate in because of generous donors and said, “”Someday I hope that I can sit where you are now. I pray that I will be as generous and kind as you have been to me and the rest of ACU.” Casey stated, “ACU is a place where I have learned how to live up to my God given potential… and I already feel as though I am making a true difference in the world.” 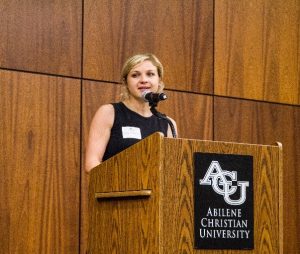 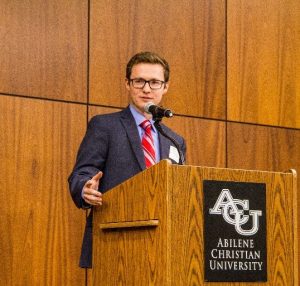 Bill Minick, finance alumnus (class of 1982) from Dallas, spoke to the crowd about founding PartnerSource, an employee benefits and risk management consulting firm which  became a leader in the worker’s compensation insurance industry and helped create a competitive market system in Texas. After being acquired by Arthur J. Gallagher & Co., Minick was able to use money from the sale of the company to support causes close to his heart, including giving money to the College of Business at ACU. He stressed to the audience the importance of not only giving of your money but also of your time in order to make the world around you a better place. 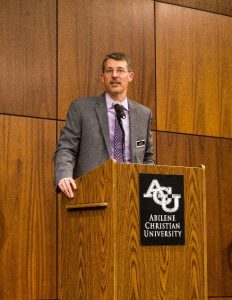 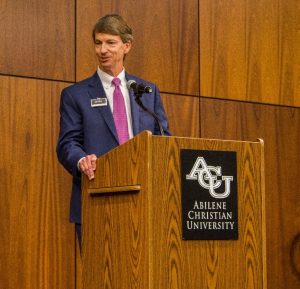 Dr. Brad Crisp, Dean for the College of Business, thanked everyone for sharing their stories and said, “In this room are generous people and the students they’ve touched. Those who give to COBA with their time and money make so many things possible, and we want to honor you for that. We’re also here because we hope that in giving our students an opportunity to meet COBA donors that you too might be inspired to bless those who come behind you after you leave ACU.” Dr. Crisp also stated, “COBA’s donors make so many things possible. Their generosity eases the burden of tuition on our students and enables us to constantly innovate in our goal to consistently provide high quality educational experiences. We’re so thankful for their support and giving spirit.”

Students and Donors get to know each other