Tell Me the Easter Story 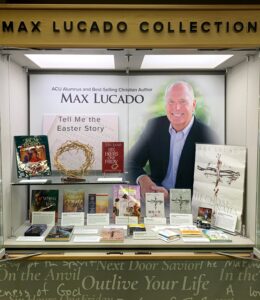 “Let’s walk with him. Let’s see how Jesus spent his final days. Enter the holy week and observe. Feel his passion. Sense his power. Hear his promise that death has no power. Let’s follow Jesus on his final journey. For by observing his, we may learn how to make ours.” — Max Lucado, On Calvary’s Hill (2013)

“Tell Me the Easter Story,” the library’s spring exhibit in the Max Lucado Collection display case in the Learning Commons, opened February 1. The exhibit invites meditation during the Easter season on the passion of Jesus Christ. It features seventeen works about the death and resurrection of Jesus written by Max Lucado between 1986 and 2013 in a variety of formats and languages, as well as artwork for the books and artifacts from the Max Lucado Collection in Special Collections.

The theme of the exhibit is based on one of the books in the exhibit, Tell Me the Story, a collection of stories for youth. One of the stories, “Resurrection Morning,” imagines an encounter between the disciples, a Roman soldier present at the crucifixion, and the risen Christ. This short story became the basis for a 1998 video titled Resurrection and an illustrated book in 2013 titled Who is This Jesus.

Also featured in the exhibit are several versions of Lucado’s 2000 devotional book He Chose the Nails. The book has appeared in several translations, pamphlets, and in a youth version, He Chose You. A musical presentation of He Chose the Nails at Oak Hills Church was broadcast live on CBN on Good Friday, April 13, 2000. Released on CD, the presentation was named by the Dove Awards for Christian music as the Musical of the Year in 2002. Max Lucado narrated the service, which included musical performances by Kim Hill, Natalie Grant, Wes King, Twila Paris, Jeff Deyo, and the Oak Hills Church Choir.

A woven crown of thorns and a set of hand-wrought iron nails in the exhibit were gifts to Lucado from readers.

“Lucado’s message of the grace of God shines through the sorrow of Jesus’ suffering in the light of Easter morning,” Dr. Berryhill commented. “I hope that the exhibit will help people pause for a moment and remember, and give thanks.”

The digital version of the newest Lucado exhibit, Tell Me the Easter Story: An exhibit from the Max Lucado Papers, is now on the Special Collections blog.