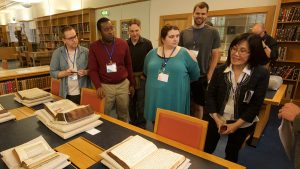 Four ACU students (three current GST students) with CSART affiliations attended the Logos conference in Oxford this summer: Brianna Rideout, Dominique Rideout, Ethan Laster, Nathan Jowers. The Logos in Oxford conference supports undergraduate and graduate students and their faculty mentors who are engaged in research on artifacts held by the Museum of the Bible or projects supported by the Museum. 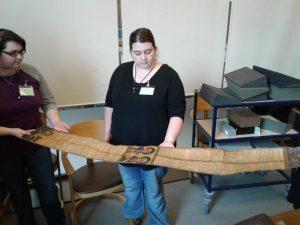 The Director of CSART, Dr. Jeff Childers says, “We’re so proud of our students who were chosen to participate in Logos. They distinguished themselves as top students at the conference and got to sit at the feet of world-class textual scholars in an inspiring setting. They also shared their own CSART research with peers and colleagues. The opportunities they had to reflect on what it means to engage in advanced scholarship as Christians fits CSART’s mission well.”

Our students attended lectures and workshops offered by prominent British scholars focusing on biblical and ancient textual studies, Oxford and its tradition of Christian scholarship, and vocation in the modern university. Participants also went on several excursions that exposed them to important collections of manuscripts and document fragments.

According to Brianna Rideout, “It was a wonderful opportunity to learn more about text criticism and have a chance to see some manuscripts up close. My favorite part of the trip was having the chance to visit the Taylor-Schechter Cairo Genizah Collection (the world’s largest and most important single collection of medieval Jewish manuscripts) in Cambridge University Library. Additionally, we had the chance to visit a couple of evensongs which were amazing.”

Ethan Laster said, “Logos offered stimulating lectures and seminars that helped enrich my own studies in Patristics, and opened my eyes to new horizons in biblical and textual studies. I was also impressed with the learning community created by the organizers–I was given the opportunity to meet a diverse group of scholars and students.”

Here at the GST, we are grateful for the opportunities CSART brings for our students. We are also blessed with talented students that represent us well all around the world.