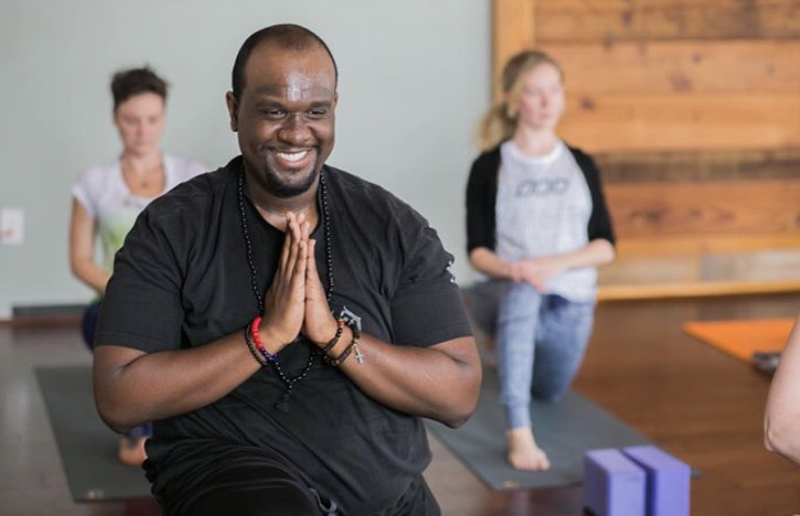 The first thing you’ll notice about Steven is his smile. I met Steven over Zoom, after approaching him via email for this spotlight (he was very responsive with his replies, by the way). His smile set a warm and deliberate tone for our meeting. As we made our first introductions, I began to ask a couple of questions about his life and his experience as an alumnus of our program.

“Before we do all that” he said “how about I tell you my story?”

And so he did. 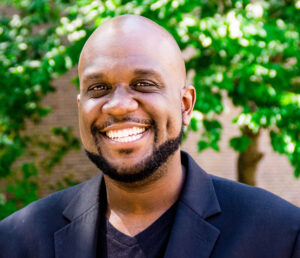 Steven was born in Brooklyn and raised in Queens. His parents were avid church goers and would take Steven and his younger sister along with them. This gave him a sense of two worlds: “Even when living life in the jungle, I had a spiritual orientation and consciousness.” He described himself as knowing how to put on the “shirt and tie” as well as the “baggy pants” of his New York context. At the age of 11 he was listening to his preacher, David Wilson, exhort the congregation on the topic of purpose. Even so young, Steven felt he was called to something greater. He felt called to preach. Eventually, he voiced this to his preacher, and would preach his first sermon at the age of 16.

Pursuing his purpose, Steven went to Southwestern Christian College on full scholarship with plans to go back to New York to be a pastor. It was during this time that he felt a need to cast his vision to other places, eventually landing in Philadelphia. During a visit in 2009, he began to fall in love with the city and began making at least one visit a year as a sort of “spying out the land” trip. He recalled having plenty of reasons to go there, but it was a feeling he couldn’t describe that was his strongest drive. This led him to think of church planting in Philadelphia.

As he grew, he felt that he wanted to be free of the more sectarian leanings of his church experience (another reason he felt pulled to church planting). It was during this time, where his first Missional Theology mentor, Pastor Amziah “A.C” Christman, planted a seed that would change the course of his ministry: “God doesn’t only work in and through the church, but God is also working outside. Let’s go outside and meet with God.” As he then prepared to meet God outside as a missional construct for ministry, he went to Amberton University to get his M.A. in Christian Counseling and planned to attend Pepperdine. That’s where the Graduate School of Theology came in. A strong scholarship and job offer from ACU’s GST brought him to Abilene. He studied heavily under Kent Smith and Chris Flanders, citing them as some of the largest influences on his life and ministry.

It was also in the GST that his worldview shattered.

“Seminary is designed to humble you” he recalls hearing during his orientation. He described to me that, after leaving the GST, he felt that he had more questions than answers. “My faith was like shattered pieces of glass.” He described his depression, his suicidal ideation, and feeling separated from God.

After he graduated with his Master of Divinity, Steven found his way to the Oak Gardens Church of Christ in Dallas under the care of Dr. Paul Day, the founding Senior Pastor. “Who I was, as an up and coming preacher in the black Churches of Christ, was falling apart and I was in a sort of in-between space.” He mused that he was brought on staff at Oak Gardens because Dr. Day resonated with where Steven was in life, and they bonded over their shared experience.

Then, in 2014, Steven was listening to one of Russell Simmons “The Happy Vegan” interviews and decided that he needed something different to cope with the crisis of his internal life. It was here that Steven fell in love with Yoga. Through yoga, he was able to find tools to cope with his depression, and eventually reconnect with God. Steven was able to serve at the Spiritual Formation Pastor and practice yoga at the same time – it was here where he noticed the harmonious intersection between the two spaces. 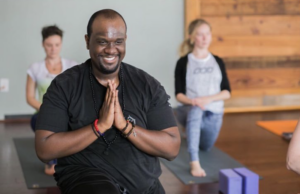 Of course, as the arch of Steven’s story continued it wasn’t long before he began to feel pulled, once again, to Philadelphia. As he was participating in Yoga he quickly began to realize that often he was the only black guy in the studio. He began to feel that this space that had been very life giving to him was not as accessible as he was hoping, and he wanted to see it change. In Philadelphia, he felt like the “happiest man alive.” He started a house church ministry which failed, then God directed him to join The Table Philadelphia, which is a church of house churches that had been in existence for a number of years. All the while, he started Yoga for Philly, a non-profit that uses Yoga to walk alongside people in need, from kids to seniors and to those impacted by poverty, drug abuse, and sex trafficking. “We use trauma-informed recovery principles,” he says as he describes what it’s like to use the tool that gave him life again, to help other people find new life.

Steven also started The Gathering, which he describes as “an ecumenical move. It’s an inter-people initiative. No matter who you are or what your worldview looks like, you’re welcome here.” He sees it as a way to reimagine socialization and human connection in a world that is so easily divided. “I wanted it to become an example of love in the context and face of diversity. Like, what does it mean to love someone, really love someone, who is different than you?”

That wasn’t all. Steven also started his own cannabis business called Hii Brand. This endeavor, at least in part, he hopes to use to help black folks find their way into the business that is dominated by whites, even while many black men and women remain incarcerated for the practice in other contexts. He also works with the local police department as a member of the Police Department Advisory Committee for his neighborhood. In addition, Steven volunteers with the Philadelphia Community Bail Fund. “I help bail people out when they need it and I help keep them out. I’m in direct contact with my neighborhood, our police captain, and fellow freedom fighters making change in the City.” 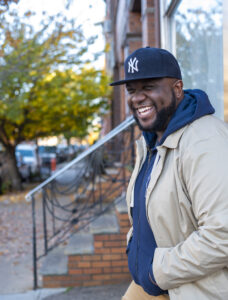 It’s difficult to describe what it was like talking with Steven. It is no secret that Steven’s journey into ministry would be considered “non-traditional” by some, and perhaps scoffed at by others. There is an obvious, knee-jerk reaction to stay away from a story like his that places our work as a seminary at the center of his biggest faith crisis. Which is perhaps why I think stories like his are so important.

“I would do it all over again,” he said to me when I asked him about how he felt about attending the Graduate School of Theology. “It’s something I really appreciate now. It’s an experience that’s meant to challenge you, to grow you. Even when things were at their worst I knew something good was going to come from it. I just had to weather the storm.” For Steven, he has a hard time imagining what his ministry would look like without the likes of Kent Smith, Chris Flanders, Mark Hamilton, and Fred Aquino. “Did it suck? Yes! But it was through all that that I learned, really learned, that Jesus is on the ground with me. I don’t have to dress up or have it worked out to be with Jesus. I can be who I am, and not put on a costume.”

It would be easy for me to only highlight the benefits of seminary (or of the ministry vocation as a whole, really) and avoid the costs. However, if I truly believe what we do is important and worthwhile, I should be able to present a clear picture of it in hopes that its merits would stand on their own. In the process of being formed for ministry it can be easy to neglect how painful some of that process might be. To be confronted with the prospect of formation is to be confronted with change and change, even for our benefit, is not necessarily a comfortable enterprise.

We talked for over an hour about his life, the struggles he’s had, and the costs he’s paid to be a minister in the context he’s in. “It cost me a lot. It cost me my reputation with the black Churches of Christ. I wrestle with these insecurities: Did I do the right thing? Did I make the right decision? Does anything I do even matter? But I do the work I do so that my kids can live in a better world. I continue the work of my ancestors, MLK, Malcom X, Shirley Chisholm, Ida B. Wells, Rosa Parks, my grandma, and those who are alive, like my parents, Angela Davis, Louis Farakkhan, and others. Miles Monroe says that ‘the richest place in the world is the cemetery because many people go to the grave with their gifts and dreams.'” In response, Steven continues, “I answered the call so that I don’t take any of my purpose or any of my dreams to the grave with me. I want to live fully so I can die empty.”

Ultimately, Steven is both challenging and encouraging. His journey, bumpy as it has been, exemplifies a man who has been willing to follow the call he hears from God wherever it goes. Someone that, in his humanity, has given everything he can to the cause. Steven reminded me that ministry is something that encompasses the whole of one’s life, from our relationships to our education. That everything we do, from leisure to business, flows from our commitment to a living God.

To young seminarians and leaders, Steven left me with this: “Know that it costs to follow Jesus.”

You can support one of his exciting initiatives by donating to Yoga 4 Philly. “You have the power to help Yoga 4 Philly reach our $61k goal to help make yoga and meditation accessible in 3 schools, 3 senior centers, and in 3 locations in Kensington through 2021. Yoga & Meditation should be accessible to everyone – period.”