On “Devoted to Christ: Missiological Reflections in Honor of Sherwood G. Lingenfelter”

Dr. Sherwood Lingenfelter has been, arguably, the most well known and prolific anthropological missiologist at the end of the 20th century and into the 21st century. He represents a large segment of the missiological world that specializes in anthropology and brings those resources to bear on the practice of missions and in the discipline of missiology. His classic book Ministering Cross Culturally is one of the best-selling missions books of all time and has become a classic. Dr. Lingenfelter did his field work in Yap in the South Pacific, completed his doctorate in Anthropology from the University of Pittsburgh, and eventually taught as a professor at Biola University for many years. He eventually served as the Provost at Fuller Theological Seminary and also as the Dean in the school of Intercultural Studies. Recently retired, he continues to be recognized as a leading missions scholar. 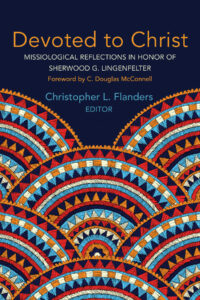 Dr. Lingenfelter left a legacy as a skilled educator and taught an incredible number of emerging and established missiologists all over the globe. As a former student, I knew that when Sherwood retired I would take it upon myself to start collecting papers from his contemporaries, colleagues, students and other anthropological missiologists and assemble them into a volume celebrating his profound influence and work. As the editor and overseer of this project, I am very pleased to see this volume come to fruition.

Anyone who is interested in current missiological conversations would benefit from this book, whether they are practicing missionaries or just want to remain up to date in missiology. This volume represents the cutting edge of missiological research through a diverse set of areas and topics. The coherence of the work is centered on the person of Dr. Lingenfelter and the impact he has left on the field of missiology rather than on one, singular topic. It’s a wonderful collection to celebrate the man and his work.

I would recommend it to any missions student, practicing missionary, or anyone who works with them or teaches them. It is a valuable resource for all those connected to the global Christian world. The articles in this work will lead people to a better understanding of diversity of global Christianity. It discusses important areas of power, partnership, patron/client structures, honor and shame issues, and things that impact global Christian world and represent distinct and diverse ways to address these Christian issues.

Dr. Chris Flanders (’94) is an associate professor in the Graduate School of Theology at Abilene Christian University. Along with his work in missiology he is also the program director for the Master of Arts in Global Service and the Missions track for the Master of Divinity.