What brought you to take on a project like this biography?

Since my field of study is Christian history with specialties in Modern, American, and Stone-Campbell history, Alexander Campbell was a natural “person of interest.” His life and thought were extremely important to the formation of the churches of the Stone-Campbell tradition, and he was very influential in nineteenth century American Christianity, yet very few people—even historians—know much about him. I wanted to get a handle on how he conceived of and carried out what he saw as a necessary reform of Christianity. The amount he traveled, wrote, published, and interacted with religious and political leaders of his day was amazing. Eerdmans began a “Library of Religious Biography” series in 1991 that has published studies of the lives of leaders like Jonathan Edwards, Charles Wesley, Harriett Beecher Stowe, and Billy Graham. Over ten years ago the Editor of the series visited ACU and asked if I would be interested in writing a volume on Campbell. I had worked with Eerdmans on the Encyclopedia of the Stone-Campbell Movement and knew firsthand of the excellent work they did. So, I drew up a formal proposal for the Press that would give me a strategy for how to proceed. Several distractions got in the way—the biggest being the global history of the Stone-Campbell movement that Newell Williams, Paul Blowers undertook for the Disciples’ Christian Board of Publication/ Chalice Press. But in a sense, the work I had already done on the Campbell biography fed into that project, and the global history fed into the Campbell biography.

What was your favorite part about working on this biography?

I’m not sure I can identify one favorite part. I really enjoy researching and doing the “detective work” of finding previously unnoticed or underestimated stories and figuring out how they fit into the big picture. It was absolutely fascinating traveling to Ireland to research the Campbells’ background, and spending long hours in libraries at the Disciples of Christ Historical Society and the Campbell Collection at Bethany College in West Virginia, among others. But that can also be a curse, because it’s easy to fall into the trap of always looking for more and never actually putting it all together and writing the story! During the years of research, I accumulated an overwhelming amount of material by and about Campbell. He had not been ignored since his death. Plenty of articles in religious papers told things about him and his teachings, and many scholarly studies focused on one or another aspect of Campbell’s work. I wanted to get a handle on his whole life and career, to understand how he was formed in his religious views and what was behind his agenda for reform. But mostly I wanted to get to know him as a person—not only the brilliant, determined, pursuer of reform, but also the arrogant elitist who resented and vigorously opposed anyone who disagreed with him—friend or foe. I suppose that was the most intriguing part of the work acknowledging the massive impact he had but also portraying him as a frail human struggling with “demons” that worked against the very good he wanted to accomplish.

What was your greatest difficulty in writing the biography? 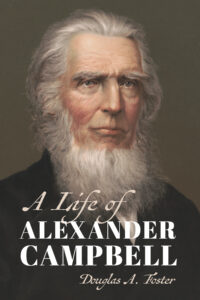 I had a huge amount of data, but I seemed to be stuck. I had an outline that was guiding me, but somehow I was still under the spell of Richardson and Wrather and had a subconscious feeling that I had to chronicle and comment on everything Campbell ever did or said—an impossible task, and one that does not result in a critical biography. I had worked intensely and even written several chapters, but I was still unsatisfied with what was coming together. One evening three years ago at about 3:00 in the morning, I woke up and couldn’t go back to sleep. I began to think about the way I was approaching the Campbell biography and over the next hour or so as I lay in bed, I completely reconceived the book. I kept going over and refining the new concept in my head, and as soon as I got up, I wrote it all down. This was the breakthrough I had been needing. I went through all the material, rearranged chapters, dropped several, added others, and had the scheme I was happy with. Then over the next year I wrote and rewrote the manuscript until I was as satisfied as I was going to get.

What insights does this biography offer that other work on Campbell doesn’t?

Two “full-blown” biographies of Campbell had already been published. The first was in 1868 soon after Campbell’s death, written by his colleague and friend Robert Richardson. The second was by Nashville historian Eva Jean Wrather, edited after her death by Disciples historian Duane Cummins, and appearing in three volumes between 2005 and 2009. While not exactly hagiographies (stories of saints), they are not critical biographies either. Richardson’s is a major source for details about Campbell’s life and draws on documents no longer in existence; Wrather’s relies heavily on Richardson and offers little new insight. I think this biography offers several things—though I don’t claim any is absolutely unique. First, I draw from the work of Campbell scholars from the past century and a half, attempting a new critical synthesis documented in extensive footnotes. Second, I approach Campbell’s life looking closely at the contexts in which he was shaped and operated, starting with his early formation in Ireland, the impact of America on his thought, the creation and execution of his reform, and the ultimate despair of his later years. One of the most impactful sections on me (and the longest) tells the stories of his often-bitter fights with other religious leaders from both outside his movement and within. I don’t think that aspect of his life has ever been told in such a comprehensive way, nor have the changes in his thought from his later years.

How does this work bring insight to the Stone-Campbell movement as a whole?

In a sense, every part of Campbell’s complex life can be seen across the spectrum of the SCM. His dogged determination to recover what he believed had been lost from apostolic Christianity, his confidence in the written word as the one sure source of God’s will for us, his willingness to give up personal comfort to spread the good news—all of these are part of the DNA of the churches of the movement he began and led for half a century. But so are his propensity to believe that he alone was right, his quickness to attack anyone who appeared to oppose or contradict him, and his ferocity at vilifying anyone who he thought posed a threat to his agenda. The SCM, like every Christian tradition, is shaped by many influences. Campbell is not unlike other significant religious leaders like John Wesley or Martin Luther who began religious reforms. They were brilliant yet very flawed human beings. Campbell is one of the most important fountainheads for the ethos of our churches, whether we know it, admit it, and like it or not.

Who would you recommend this biography to?

Certainly, I would recommend it to people interested in the Stone-Campbell movement and American Christianity. But I hope it would also be appealing to anyone who enjoys religious biography—or biography, period. The book does have footnotes (I needed to back up some claims I am making that may be controversial), but I think the story is told in a way that would engage general readers who are not at all specialists. It is a fascinating period in American history, and he is a fascinating character in that story.

Douglas Foster is Professor of Church History in the Graduate School of Theology and Director of the Center for Restoration Studies at Abilene Christian University. He served as General Editor for the Encyclopedia of the Stone-Campbell Movement (2004), as well as The Stone-Campbell Movement: A Global History (2013). In 2013 he published The Story of Churches of Christ, a brief introduction to the movement, and in 2014 recorded a video series with the same title designed for congregational study.