The following are segments from Erik Masci’s (Recruiter, Graduate School of Theology—GST) interview with Dr. Frederick Aquino (Professor of Theology and Philosophy, GST).

You were in Romania recently; why were you there?

I was invited to attend and participate in the inaugural conference for the International Orthodox Theological Association (IOTA) in Iasi, Romania (Jan. 9-12, 2019). The theme was “pan-orthodox unity.” “all respectable and well- grounded views on controversial topics to be discussed in an open manner.” The idea was to bring together Orthodox Christians from a wide range of perspectives and geographical backgrounds to foster a move towards unity in light of potential fractures that I think sometimes happens within any tradition. Accordingly, the conference brought ecumenical observers who were asked to attend the various sessions and offer some observations and recommendations for IOTA’s future work. I was truly honored to be a part of the conference!

And for those who don’t know, tell me a little bit about IOTA.

IOTA was established in February 2017 by Professor Paul Gavrilyuk, who holds the Aquinas Chair in Theology and Philosophy at the University of St. Thomas, MN, and a group of leading Orthodox scholars. It is a “community of scholars and professionals dedicated to the worldwide exchange of knowledge within the context of the Orthodox tradition” (https://iota-web.org/mission/). Accordingly, IOTA seeks to serve as a vehicle of Orthodox Christian intellectual culture by providing a forum for free, honest, and respectful exchange of ideas and thus help the Orthodox tradition grapple with contemporary challenges.

In what ways did you participate in the conference? 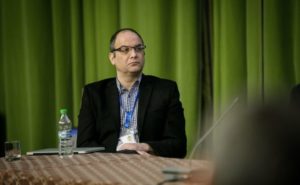 I participated in three ways. First, I gave a paper on Maximus the Confessor (a 7th century Orthodox thinker) for a session entitled “Spiritual Perception in Eastern Christianity.” Other presenters were Professors Paul Gavrilyuk (University of St. Thomas, MN) and Marcus Plested (Marquette University).

This session connected the first stage of the spiritual senses project[1] with the forthcoming volume on spiritual perception.[2] This new volume seeks is to try and clarify what what we mean when we employ the language of “spiritual perception” and to show how it relates to a range of topics like ecology, iconography, racism, biblical interpretation, and divine hiddenness. Second, I was an ecumenical observer; ecumenical observers included people from the following traditions: Roman Catholic, Anglican, Methodist, Lutheran, Churches of Christ, and Pentecostal. Third, I chaired a session on ecumenical conversations about theosis.

As someone who teaches for ACU and is a member of Churches of Christ, how did you get invited to be a part of this conference?

I think that I was invited for academic and ecumenical reasons. I have published several articles on some of the philosophical aspects of Maximus the Confessor’s thought. However, in an ecumenically charged atmosphere, you need to do justice to the tradition that you are observing while offering appreciative but critical feedback. Familiarity with Eastern Christianity and ecumenical generosity seemed to be an ideal combination for IOTA.

What was your favorite part of the conference?

Perhaps my favorite part of the conference was seeing and hearing firsthand the varied and wide-ranging landscape of the Orthodox tradition, assembled in one place. The conference, as advertised, created an atmosphere of an open and honest exchange of different perspectives. It also wonderfully combined various scholarly disciplines in rich and fruitful ways and explored the intersection of academic thought and the life of the church on various topics (e.g., liturgy, spirituality, philosophy, biblical studies, theology).

What are some of your recommendations for IOTA’s future work?

The inaugural conference was a great start for IOTA! I have two distinct, but related, recommendations. First, I hope the Orthodox tradition will continue to carve out its own concerns and have the space to do that within its own internal framework. Second, I also think it is important for a tradition (in this case the Orthodox tradition) to acquire insights and perspectives from non-Orthodox scholars and communities. I hope IOTA finds concrete ways in which to open itself up to dialogue with broader perspectives. This must be done with great awareness of the complexity of such a conversation.

To see more on IOTA and Aquino’s experience there see the links below:

Photos courtesy of the IOTA conference and can be found on their website (iota-web.org)