Baker Academic describes this book as “the culmination of a career of researching and teaching Paul’s letters.” What inspired you to take this career-long journey into Paul’s letters, and in particular, to write this book?

Having earlier served as a pulpit minister I have consistently lived on the boundary between New Testament exegesis and pastoral theology in a dialectical way. Issues in the church take me back to New Testament exegesis, and exegetical issues raise questions for Christian practice. My Preaching Like Paul, the first in this series, was a dialogue between homiletics and Pauline practice. Similarly, my Pastoral Ministry according to Paul was exegetical, but it was intended as a corrective to common pastoral practice. The same motivation was involved in subsequent books on Paul. The current book, Apostle of Persuasion, is intended to demonstrate that Paul’s theology is intensely pastoral, aimed at creating cruciform communities. Studies in theology and rhetoric are rarely in dialogue with each other. I have tried to bring them together, demonstrating that Paul is not an abstract theologian, but one whose theological reflection is aimed toward Christian moral formation.
Tell us a bit more about how these two categories of theology and rhetoric are informing your study of Paul’s letters in this book and why this approach is important for a better understanding of Paul and his letters.
Studies of Pauline theology have traditionally attempted to systematize his theology into distinct categories without observing the total dynamic of the communication. In recent years, I have found rhetorical criticism a helpful approach to Paul’s letters. Rhetorical criticism observes the Pauline letter in its final form, recognizing persuasive strategies in Paul’s communication. 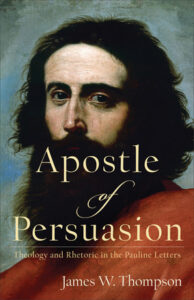 What contribution does this book make to the larger corpus of Pauline studies?
I wrote the book because rhetoric and theology had emerged as two different fields that were separated from each other. I am not aware of any other work that has demonstrated the interaction between Paul’s theology and his rhetoric.
In what ways has your career in Pauline studies shaped the way that you view Paul and his writings?
Like most NT scholars, I first assumed the traditional understanding of Paul, according to which justification by faith is the center of his theology. I have been influenced by the new perspective on Paul, which has largely shifted the focus of Paul’s theology. In recent years, I have become convinced the Paul’s major concern is the moral formation of his converts. Whereas the old perspective focused on “getting in” as the focus of Paul’s theology, I am convinced that his major concern was the final outcome of his churches.
Who is the target audience for this book and what do you hope your readers will get out of this book?
The book is intended for advanced undergraduates, graduate students, and academics.
What’s your favorite part about Paul’s letters and studying them?
2 Corinthians is probably my favorite text. My first book was the commentary on 2 Corinthians in the Living Word Series. It was followed by my BD Thesis
on 2 Corinthians 3. Second Corinthians is an ideal book for someone who lives on the boundary between exegesis and practical theology.

Dr. James Thompson is Scholar in Residence at the Graduate School of Theology as well as the editor for Restoration Quarterly