A bit about me

I’ve just started my seventh year at ACU—3 years in undergrad and going on 4 as a grad student. I married my high school sweetheart Sarah two years ago, and we’ve since grown our family with the addition of two pups, Luna and Rizzo. I am currently the preaching minister at Blanket Church of Christ. As far as my committee members are concerned, I spend all of my free time working on my thesis. But besides that, I love hanging out with Sarah, mostly doing things like watching movies, cooking fun meals and desserts, going on walks (to burn off all the calories from the meals and desserts!), and gardening. I’m also a big sports fan—if my schedule allowed it I’d watch some sporting event literally every day (but alas, grad school). Sarah’s not big on watching sports, but we do enjoy being active together—we’ve recently taken up tennis, which is a blast. I try to get her out on the basketball court too, but she beat me in H.O.R.S.E the last time we played and she likes resting on those laurels, if you will. Speaking of basketball, Joel mentioned in his student spotlight our intramural basketball team from last semester. I think Joel was the leading scorer on that team, so if he’s up for it I’m definitely game to revive the Sons of Thunder and give it another go this season.

What brought me here

I’m in the MDiv and the MA in New Testament. A lot of things came together to bring me to ACU and to these degree paths. My home church had been calling me to ministry for several years when in high school I finally decided I should listen. My sister was at ACU at the time, so the bit of familiarity I had with the school through her led me to apply here. At the time I truly had no idea how good of a decision I was making. My undergraduate experience at ACU was wonderful, and it was during that time that an understanding of my ministerial vocation began to form. As I was immersed in the academic study of the Bible, it’s languages, and Christian history, I was drawn to the idea of making a career out of this. Combined with my love for teaching, it made perfect sense for me to pursue graduate studies with the goal of eventually becoming a seminary professor. Which is why I’m in the programs I’m working on finishing now. I was advised that the MDiv would give me a broad base of knowledge to build on, and that an MA would give me the specificity needed to engage in serious scholarly research. My time in the GST, I think, has proven this to be accurate.

My specific area of interest now is nothing at all like I would have imagined it when I entered the GST. I came in to my programs knowing two things for sure: I loved the New Testament, and I loved studying Paul’s letters. So naturally, I figured Pauline studies would be the route I’d take. But the more I got into it, the more daunted I became at the prospect of trying to contribute to the body of scholarly knowledge on Paul and his letters. It seemed I could spend a whole lifetime just getting my hands around the literature, much less saying something new about it! But at the same time, I took up an interest in Eastern Christianity. It began with a language course in Syriac that I took just for fun, but I quickly realized that here was a whole new world (to me) in which my interest in the New Testament and Paul could really flourish. So now I’m studying Syriac translations of the Pauline literature, and am interested in studying more broadly the way Syriac Christians read and interpreted the New Testament. 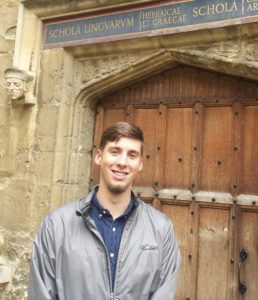 It’s hard to say what is the most valuable thing I’ve learned here, because I’ve learned so many valuable things. One thing that comes to mind at the moment is the value of learning in relationship with others. When I was looking into grad school, one of the negative things I often heard was that the competitive environment among the students in grad school can be crushing. That has not been my experience at all in the GST. To the contrary, I have made many great friendships with my peers here, for whom I am extremely thankful. I’ve seen how grad school can be a very isolating time, which has made these friendships all the more beneficial to me. Sharing this journey in relationship with others is so much more rewarding than viewing one another as competitors. It has enriched my life, and has even enriched my academic experience. When you don’t think of someone as a competitor, you can actually learn from them and see the value in their perspective, even and especially when they disagree with you! So if you asked me this question every day for a week, I could easily give seven different answers. But for now I’ll say that the most valuable thing I’ve learned is to value the people you get to share these experiences with.

The impact of my study on my faith and ministry

A lot of people were perplexed when I told them I was going to college to do ministry (“do you really need a degree just to preach?”). On a very surface level, I suppose people are right to wonder this—in the ministry that I do at Blanket Church of Christ, for example, my training in Greek and Syriac and Church history and systematic theology and higher biblical criticism and all those other fancy things doesn’t really show up explicitly in my sermons. But that’s certainly not to say those things aren’t vital to the faith that I have and proclaim to my congregants. Instead, all these things that I’m studying have worked their way into who I am as a Christian and a minister, and even if they don’t show up tangibly, they’re always there in the background. The way I think about this is that it feels like for the first time I’m seeing the Bible, the Christian faith, and the heritage of the Church through eyes other than my own. So my faith and ministry aren’t just more well-informed than they were when I stepped into ACU’s campus six years ago, I’d like to think they’re a bit more well-rounded, a bit more broad in scope. That’s obviously not to say that I’ve got it all figured out, or that my faith or ministry is better than anyone else’s. But the things we do in the GST push me to see beyond myself, and I think that that is deepening my faith and my ministry in ways that I can’t really even fully articulate.

Advice for people thinking about or entering seminary

When I started at the GST, I had an image in my head of a grad student being somebody who had absolutely no life outside of reading, studying, and writing. So I leaned into that in my first two semesters especially, and while I was thriving academically I was floundering in basically all other areas of life. Getting married in the summer before my third semester was a bit of a reality check–my model for success in grad school was exposed as a sham, because I couldn’t have no life outside of schoolwork AND have a successful marriage. I’ve learned a lot about balance since then, I think, and I’ve realized that you actually can succeed in grad school while having a life outside of it. So that’s my advice to people considering seminary: don’t come in like I did, thinking that you can’t do anything but read, study, write, and sleep. Yes, you’re going to have to do a lot of that to succeed academically in grad school. But make time to have a life, too. Develop relationships, engage in hobbies, have spiritual practices (and don’t pretend that reading for class counts!), watch a sporting event every now and then if you’re so inclined! It takes a good work ethic while you’re working, and it takes intentionality when it’s time to stop working and do something else. But it is possible, and I think it’s a better model than the alternative.