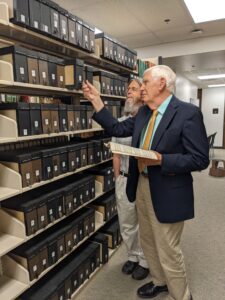 A unique collection of 7,186 choral scores that was gifted to the ACU Library in 2014 by ACU’s choral department is available for students and faculty to enjoy and utilize, as well as musicians from other schools to use for scholarly research.

The collection was originally collected by former ACU choir director, Dr. Jack Boyd, who began accumulating the scores in 1964 when he worked as the conductor of the University of Dubuque Concert Choir and the U.D. Chamber Choir, which he started.  Around this time, Boyd also volunteered at the prestigious choral magazine, The Choral Journal, writing a column that included choral reviews and suggestions.  Boyd shares, “Publishers were delighted to get a review in The Choral Journal because it reached 4,000 or more choral conductors.”  When Boyd began writing the column, he connected with every choral publisher informing them of his monthly column and the importance of world-wide knowledge of chamber choirs.  As a result, “The music poured in!  I received an unbelievable spread of music, from works for one solo voice and piano to huge selections from works like Verdi’s Requiem. I would receive music, review it, write about it, then store it in black boxes.”  Boyd stepped down from writing the column in 1980; however, choral publishers would continue sending him all kinds of music, of different languages and voices.

The collection of printed music is extensive, including rare pieces going back to the beginning of Boyd’s conducting career in 1955.  Some publications date back to the 1950s and a few from the1940s when he worked with the old files of the Paducah, KY High School choral library. A few boxes were even collected from the basement of McKinzie Dorm when he arrived at ACC in 1968 to be the director of Choral Activities.  He shares,  “I’m delighted to hear that students and faculty are using the scores. One very valuable aspect of the collection is that although most of the music is for a standard chorus of soprano/alto/tenor/bass, there are also pieces for soprano/alto/baritone, tenor/baritone/bass, soprano/soprano/alto, two part choirs, and even for unison chorus, all in appropriately labeled boxes.  There’s a box for everything, including Christmas. Many of the publications are now out of print, and several are from former Soviet Union publishers, which makes them that much more valuable for research.”

The choral music collection has already been used by ACU’s choral music education students.  Dr. Jeffery Goolsby, Director of Choral Studies, works with students to plan a series of concert programs. Students visit the library to use the scores and build a year-long program for an imaginary high school choir. “It’s an important case study for our future choral directors. The hands-on experience of score selection, comparing styles and composers and genres, is invaluable to music educators,” says Goolsby.

The Boyd Choral Music Collection is categorized by composer, genre and parts by Dr. Boyd.  The library’s cataloger and authority control librarian, Gary Oliver, volunteered to catalog these scores.  He shares, “I was honored to coordinate the task of adding this collection to the library catalog which took seven years to complete. I need to say that student employees who were hired specifically for this project, most of whom were music majors, did the heavy lifting in cataloging these pieces of music. We even had a volunteer, Hannah Palmer, who stamped our property stamp on all 7,186 pieces and labeled most of them.”