Felix Mbikogbia, a senior computer science major from South Sudan recently completed a 15-week internship with ACU’s Nuclear Energy eXperimental Testing (NEXT) Lab.  Felix began working for the NEXT Lab in February of 2018 as a web manager where he is in charge of the NEXT website as he is editing content, adding new content, changing and updating the looks of the new website when necessary. He continued honing his skills as a Web Manager but also was able to work as a software engineer, developing software for the control system of the Fluoride Molten Salt Test Loop that NEXT is currently working on.

One of the things Felix has appreciated most as an ACU student is the friendliness of all the professors he has worked with as well as the advice and preparation that the COBA Professional Development Manager, Steph Brown, has given him in helping him prepare for the internship and future employment. “One important thing I learned from my internship, apart from the technical things I learned, is accountability. During my internship, I was the one most in control of what I had to do each day.” Felix noted that he “had to make sure I scheduled and planned accordingly, as well as being accountable to my supervisor about work finished or in progress. I also learned the importance of documentation, making sure I write about the work I did for future purposes as well as presenting at the end of the internship.” 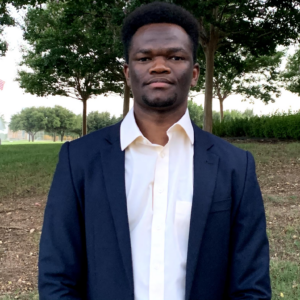 Felix’s coursework, especially his software engineering class, thoroughly prepared him for the internship, and completing multiple group projects helped him learn the importance of working with others. He was able to take his classroom experiences and transfer that into the work he completed in NEXT Lab saying that it “would not have been made possible without the work of the team as a whole.” Felix believes that the experience and what he learned from working as part of a team will be a practice he will take with him post-graduation.

While much of what he learned was on a “learn as you go basis” during the internship Felix feels like some of the technical skills he cultivated, such as Raspberry Pi and Arduino, will be beneficial in future employment experiences and in his personal life. Felix felt the freedom to learn from his mistakes because of the support he received from his ACU NEXT Lab internship supervisors – he knew that they wanted him to succeed. To students that are preparing for internships, Felix advises, “Don’t be afraid to ask questions when necessary. When you are in an environment of experts do not spend an extensive amount of time trying to learn something on your own when you can ask a simple question to someone.”