Every year, a group of select students is recognized during graduation ceremonies for their academic excellence and good scholarship throughout their college career. The University Scholar Award is given to students who have maintained a GPA of 3.5 or higher, earned 90 hours towards their degree, and have pursued knowledge in their research field. All the recipients of this award are nominated as outstanding students by their department’s faculty and are evaluated by a separate committee. This year, two SITC students were selected to receive this award: Matthew Middlebrook (DET) and John Marsden (CS). 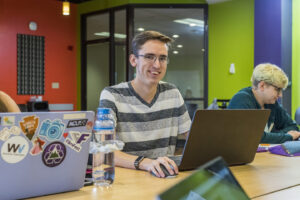 Matthew Middlebrook is a senior Digital Entertainment Technology major from McKinney, TX. Matthew chose ACU because he wished to attend a Christ-centered university that had a game design program, and since then has pursued his passion for technology. Besides being part of the DET Club, Matthew started working at Wildcat Software last spring where he was able to discover the career path he wanted to take.

“I’ve had a ton of learning and personal development opportunities at ACU. I learned how to create a mobile game with a team. Dr. Ray Pettit gave me the opportunity to become a tutor for his Scripting class. I learned from my peers about 3D modeling through DET Club. I led the 3D re-creation of the Mabee Business Building as a 3D Virtualization Assistant. I was a part of and helped as a co-cinematographer for the first ever 3D animated film at Film Fest in 2019,” Middlebrook said.

Even though his student organization involvement and professional development was a huge part of his college experience, he was also spiritually fulfilled by the diverse array of chapels that SITC hosts and enjoyed the department game nights and building a community with his professors and peers, “Even if they destroy you at Mario Kart.” Matthew is very grateful for the relationships he built with his professors and says, “SITC has helped me get a bunch of wonderful opportunities for learning and professional development. If it wasn’t for Dr. Burton and Professor Tanner, I wouldn’t have been able to do as much as I have done throughout my time at ACU.” After the last USAA visit on campus, Matthew applied for a job as a Software Developer at their Plano office and hopes to start working in June.

A few words about Matthew from his professors at SITC:

“Matthew Middlebrook exemplifies everything a DET major should hope to be. He is very detail-oriented, gives maximum effort on every task, and strives to understand the material at a deeper level than we ever have time to get to in our courses. He is highly motivated and exceptionally curious, which are attributes that are essential to the digital entertainment technology field and will help him to excel in any career path. I will truly miss Matthew when he graduates, as I have come to rely not only on his exceptional academics but also on his personality and presence in my courses. I look forward to witnessing all of his future successes!” – Professor Rich Tanner

“We believe that Matthew Middlebrook has truly exemplified the student scholar that we are seeking to develop at ACU and specifically the skills needed to succeed as a SITC graduate.” – Dr. Brian Burton 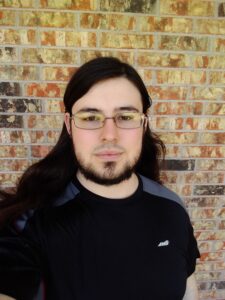 John Marsden is a senior Computer Science and Mathematics major from Abilene, TX. He chose ACU for the computer science program that would prepare him to pursue a career in software development after graduation. John is currently the Vice-Chairman for ACU’s Special Interest Group for Computer Human Interaction (SIGCHI), whose paper was selected for the CHI International Conference in Hawaii this spring. Along with SIGCHI, John has been involved in many different student organizations and activities on campus like the NEXT Lab and Atom Smashers. During his sophomore year, John traveled to Chicago to participate in physics research at the Fermi National Accelerator Laboratory. His junior year, he completed an internship at Faithlife as a result of SITC’s connection with this software development company.

One of John’s favorite memories includes the monthly game nights hosted by SITC enjoying the company of his peers. But, he also remembers his programming classes and how these introduced him to the world of programming and prepared him for the real world of software development. John said, “They helped introduce me to the theoretical underpinnings of Computer Science. They taught me how to think and problem-solve in my chosen profession. This, more than anything, has helped prepare me for the world I’m about to go into.” He credits some of his academic success to his favorite professor, Dr. John Homer. “The way that he cares for his students is obvious in the work that he puts in for every single one. He has put in a large amount of time into making his classes understandable and if someone doesn’t understand something he tries to take time out to meet with them and explain.”

When asked what his most impactful moment at ACU had been, Marsden said, “It’s hard to point to a single moment. Rather, these past 4 years have taught me a lot about myself. I hadn’t ever thought I wanted to be a professor but after these past 4 years, I want to pursue a career teaching students computer science and doing research. That decision took the better part of 2 years to really decide and it was many moments all combined that helped me make that decision. So, no single impactful moment but a single impactful experience.”

John Marsden is graduating in May of 2020 and will head to North Carolina State University to pursue his Ph.D. in Computer Science and continue to do research in his field.

A few words about John from his professors at SITC:

“John Marsden, as an undergrad, has been able to achieve what most folks only start to achieve as graduate students. He’s actively engaged in research and publication.” – Brent Reeves

“John is an amazing student, intellectually curious, and authentically real with everyone he meets. He can’t help but help others and graciously shares the knowledge he has. I consider myself lucky to have been John’s professor and even more so to be his friend.” – James Prather