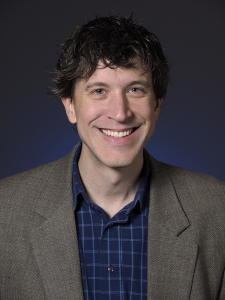 What is your educational background?

I have a Bachelors in Engineering and Computer Science. I got my bachelors when I was in the military.

What is your work background?

What do you teach at ACU?

I currently teach computer science classes: entry level programming courses and an artificial intelligence course which I really like. I’ve gotten to teach that for about ten years now. In the past I have taught computer and design and special topics for robotics. I’ve done a couple honors colloquia, which are really fun, on artificial intelligence and futurism. I also co-taught with Andy Little on AI society and law.

What committees/other duties do you have at ACU aside from teaching?

Right now I don’t have any official committee appointments. In the past I’ve dealt with recruiting a lot.

What drew you to teaching? Why did you want to work with students?

I got drawn to teaching on the job, doing software development work. I really liked the parts of my job where I could help a company out who is new in the industry and teach them about our software. Along the way I found I liked explaining things in general. In college, I was really introverted; I was the stereotypical computer science geeky kind of person. Over the years I became really extroverted. I found myself liking more and more the parts of my job that included interaction with other people. A few of my jobs were solo, isolated projects and I realized I didn’t like that anymore.

What’s the best part of working with students?

It’s that moment when they understand some concepts for the first time and they realize that it is valuable. Talking about a theoretical concept and showing it in practical terms and getting students to see the value of theory is just really cool.

Have you ever given up any big opportunities to keep working with students?

I worked in industry for twelve years. When it came time to teach, I knew that meant missing out on a lot of things. I was making twice as much as I am making now which meant I would have to take a pay cut. It was worth it because this is what I like to do and this is worthwhile and more fulfilling. I am contributing more to the world by helping people learn things than by making code run faster. Since I’ve been here, I have gotten occasional offers but turned them down.

Outside of teaching, what passions and hobbies do you have?

I like to travel a lot. I helped start a charity several years ago. We started an orphanage in India that has been running nine years now. We’ve been branching out and have been hiring some teachers for some slum areas and making some wells. I also went to Africa one summer to help teach and set up computer equipment and internet access. I like video games a lot. I like playing sports, I like watching sports. I go to almost every type of ACU sport there is at least three times.

What is a good, early story about your teaching?

The very first semester I taught, I was teaching operating design. The first or second class period I was telling students that the next class period we were going to talk about designing a software system. We were going to do role playing where people were playing the role of a different software component and simulate the interaction between those computer situations. So the next class period, one student came in and had a big brown monk’s cloak on with the hood and a rope belt and a big fuzzy die. I asked him if he was at some convention before class and he said, “No Mr. Pettit, you said we were role playing today so I came dressed appropriately.”

There was also one time where I posted an exam and I forgot to check the box that said randomize answers. So they stayed the way I put them in. I always put the correct answer first, so every answer was A. Surprisingly, the grades were not that different. A lot of the students didn’t even catch it.

Tell me about a project or accomplishment that you consider to be the most significant in your career.

It would have to be finally getting my PhD done after ten years of work; battling through unexpected events and challenges.

Do you do any charity or non-profit work?

As I mentioned before, I work with the orphanage in India which is called Sanctuary Ministries (http://www.sanctuaryministries.org/). I am also involved with my church. Much like during the week, I work in the cradle class watching babies. It is very similar to my job here: limited social skills, they drool a lot, they don’t listen, make rude sounds.

Who was your most inspirational professor and why?

I had a professor in grad school who was really good but known to be really strict: Dr. Galfant. It was my first semester, and we all knew his class was going to be hard. But I thought since he was the most published professor in the department I should take him at least once, just because it would be good for me. It was so hard, he even made students cry in class. So this professor would come into class and he wouldn’t say anything. There would be no introduction to the class, he would just start writing on the board. The way he presented it was totally not the way you’d learn it. But he was brilliant. He wanted us to be very precise in our questions. He was very exact with his vocabulary and never said anything that was ambiguous at all. It was like math was his native internal language and he had to figure out how to translate that to English before he could talk to you. You would then speak to him and he’d run it through his processor and translate it to math. If it was ambiguous at all he would stop and ask you to restate it. He was a fascinating guy.

The first exam was coming up and we knew that he graded hard, so we panicked going into this exam. He walks into class and asked what questions we had. No one raised their hand; we all just wanted him to start telling us what we needed to know for the exam. While we are looking around at each other, he says, “good, no questions,” and he walks out. Someone looked out and saw he went back to his office. For the next exam, it was the same situation. This time, we came prepared with pages of questions. That’s when I figured out that is what it means to be a student. That’s what it means to take responsibility for yourself. Getting ready for that question study session was one of the key things for me in figuring out how to do school when it gets really hard. I realized that is what I needed to do in every class: be more active in my leaning. Because of that, he became my favorite. That was a very good lesson.

If you could have a superpower, what would it be and why?

Time travel. So you could experiment with things. And if you mess up you can go back and experiment another way.

What is something that students might be surprised to find out about you?

I had a horrible freshman year in college.

What would you really want students and alums to know about you?

Because I had a horrible first year in college, when I have students who do really badly in my class, I talk to them as somebody who has been there. A lot of the problems students have is that they are slacking or staying up late and I totally understand. I did that my whole first year and flunked out of college.