Student Project with iHeartMedia is a “Talented” Effort 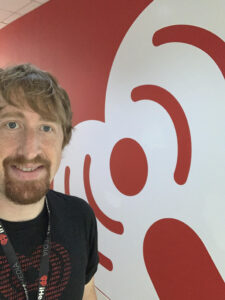 Partnering with companies to provide real-world work experience in the classroom is something that Dr. James Prather is dedicated to bringing to his students. As a UX professional, Dr. Prather has been a consultant with iHeartMedia since May of 2019, working with the User Experience (UX) team and designing applications for DJs to use on air to run their radio stations. Through his work with iHeart, he has forged a relationship with their technology teams that has been mutually beneficial for the company and for the students in his Human-Computer Interaction 2 course.

During the fall of 2021, computer science majors SK Hall (’21) and senior Carter Leslie were able to work on a project for the company that not only helped one of them land a job at iHeartMedia but also reap great rewards in the knowledge and proficiency they gained.

With the advice and mentorship of Prather, SK and Carter worked to design a caller history feature for iHeartMedia’s new on-air talent software, the Sound+ Software. As the students went through the entire UX development process, Prather helped them understand the project and domain, contacted users to interview and test their designs, and solicited feedback from the UX team for their project milestones. The students conducted interviews with the radio talk show hosts to figure out what they wanted and needed with the software. From there, the project began to take on life as they went through five stages: 1) research, 2) wireframing, 3) prototyping, 4) user testing, and finally 5) revisions. Carter said, “We then made 4 different low-fidelity wireframes and tested each one of them on a different user. Using the information from testing, we decided which two wireframes to move forward with. We then made these implementations into high-fidelity versions and tested them with talk show hosts. From this information, we were better able to figure out useful qualities and decide which version we wanted to implement for the final product. Finally, we polished the final version using everything we had learned from the previous rounds of testing.” The project culminated in a Zoom presentation to three members of iHeartMedia’s team in December of 2021. 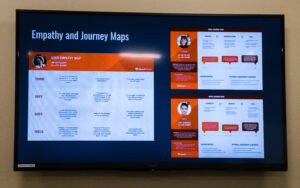 A semester-long project is not only educational but provides a lot of satisfaction to students as they watch their idea come to life. Carter was proud to see the product perform in a way that is optimal for the user, saying, “I love doing user testing to see what features we included that actually work and which features we need to improve on. Seeing a user respond well to a feature is very satisfying while getting to brainstorm areas that we need to improve on is equally important and fun.”

SK enjoyed getting to interact with real users. “It was awesome to pull inspiration from what they said and see the difference we were going to make.” And Prather’s favorite thing about the project? “Definitely getting to watch the students interact with some of the top radio talent across the country. They are such fun and interesting people who love what they do.” The collaboration between SK and Carter showed them how a team’s strengths and weaknesses can balance each other out and gave them a new perspective in working together as you listen to your customer. SK minored in graphic design and her experience in that area helped when it came time to create the software for usability and appearance. Carter was a fan, saying, “Personally, I am way better at running the testing and brainstorming new ideas than I am at making the mock-ups themselves. I’m really thankful for SK in this part because she has the artistic ability and care that I don’t. I focused a lot on functionality and then she would implement it in a visually appealing way I couldn’t alone.”

He went on to say, “It also reinforced the idea that one of the most important things in life is the ability to communicate effectively and be personable with people you talk to for work. Getting to work with on-air talent directly meant we had to be able to communicate well to not only express our own ideas to the users, but also understand the wants and needs of who our product is serving.”

SK learned that professional growth means working through your own fears and crises of confidence. 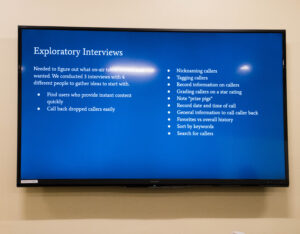 “The imposter syndrome feels so real, but isn’t actually real. You have learned so much and come so far, be proud of what you make and don’t be afraid to share. I was so scared that my work wasn’t going to be up to their standards but I was told they were absolutely blown away which gives me so much confidence going into the real world.” She is grateful that she received practical experience with a real project instead of “just schoolwork”, allowing her to get a glimpse of what the working world is like past the classroom.

The students were not the only ones who learned something during this time. Prather said, “I’ve been working on this particular project since the start of the summer and there are still things I didn’t know about how talent does their jobs and how that affects the design of the software.”

Although he won’t be working directly in HCI, the project expanded Carter’s portfolio, giving him more diversity with employers and has stretched him as an individual as he has learned to take constructive feedback on his designs and then “fix them in the ways that may take away from my original idea, but has humbled me a lot in the design process.”

Carter advises students to always give their maximum effort. “Always put in your best work, especially when you’re doing work outside ACU. Nothing feels better than making yourself, your teammates, your professors, and your university all look good. Companies will notice when you do high-quality work for them.”

Carter will be going to work for USAA after graduation and is grateful to iHeart for the opportunity to work on the project, gain confidence, and learn new things that grow his knowledge base. He also appreciated the environment at ACU that contributed to his academic and personal growth. “I like how small but connected being a computer science student is. I know just about everyone in my major that is near my grade level and enjoy taking classes with many of these classmates who have become friends. Even though a classroom environment is supposed to be mostly educational, many of the students and professors help make it fun and entertaining at the same time.” 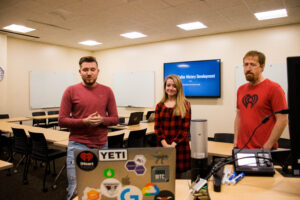 Dr. Prather looks on as Carter Leslie and SK Hall present their project to the iHeartMedia team

The project proved to give SK more than experience – it landed her a job with iHeartMedia as a User Experience Designer. She encourages future students to look into this project-based course, saying, “It’s not something a lot of people know about, but it is SO important. Even if it’s not specifically what you want to do forever, it will absolutely change how you look at the world around you.” She also sang the praises of Dr. Prather as he mentored the students through the project. “He didn’t really help us much but he was there in case we ever fell. He was so encouraging and made us feel capable of things we had never done before. Without him, I definitely think the project would not have been as successful as it was.” SK echoed Carter’s sentiments about her time at ACU, saying, “Something so special about ACU is not just the class size but the intentionality of some of their professors. James Prather always had his door open for anyone who had questions about not just work but life and faith as well. I’m so thankful to have had him as a professor for the past four years. SITC is such a community! You’re around the same people for your whole four years and make connections that will extend way past graduation.”

Prather commended his students and hopes to carry out more projects like this in the future. “This was certainly a trial run and the students knocked it out of the park! I hope that iHeart will be interested in continuing this relationship where students can work on real projects. Nothing beats hard work and curiosity. Most students graduate with a portfolio of class assignments, but these students are going to be able to show off a real project for a top media company. That gives them an edge in the marketplace.” 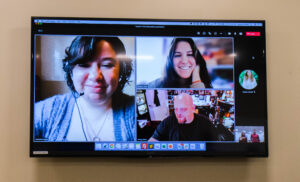 Special thanks to the iHeart UX team!

This project would not have been possible were it not for the partnership and collaborative effort with iHeartMedia. Prather said, “I’d like to thank Steve Mills, iHeart Global CIO, for allowing and encouraging this work to happen, and also thanks to David Morely, iHeart UX Director,  and the iHeart UX team for all their helpful feedback on every milestone. These students felt encouraged, supported, and challenged at every step.”

If you’d like to learn more about SITC, our professional development program, or be connected to a professor or staff member who can partner with your company, please email us at sitc@acu.edu.