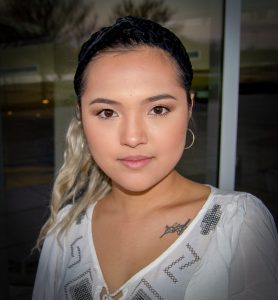 Adrianna Mott from Booneville, AR is a student who has shown real initiative when it comes to her education. Although this is only her first year at ACU, she is already a junior by hours thanks to a program which credited students at both the high school and college level.

Before entering high school, Adrianna knew she was interested in pursuing game design. While searching for colleges, ACU reached out and offered her a scholarship. When she visited the campus, she got to talk to professors in the department. The department had begun working with VR, which not many other colleges were doing. Adrianna knew that the courses ACU was offering would help in the pursuit of her passion.

One of those courses focuses on creating AR/VR in a variety of game engines. It teaches coding in game engines such as Unity, Unreal, and BabylonJS. This provided a challenge for Adrianna because she didn’t learn any coding languages before college. Thankfully, she took a course on Scripting her first semester. It introduced her to the fundamentals and helped in the preparation for more advanced classes. It wasn’t long before, she gained confidence in her ability to code.

Adrianna also gained experience when she participated in a Mechanical Engineering internship. It involved measuring machines and creating a 3D model of it using Autocad. She also worked as a tutor and a teachers assistant in the department. Lately, she has been working on advertising for DET, making videos for prospective students.

There is a variety of chapels across campus for students to participate in. One of Adrianna’s favorites is DET Chapel. It is a small group on campus that talks about ways they can connect with God through their work. She is also helping the DET Chapel group on a virtual reality church. She has created 3D models as well as conducted research on the impact the virtual church could have. 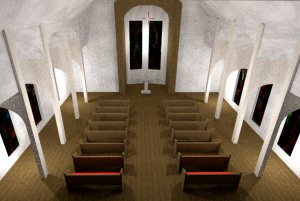 As a personal project, she is working on a VR educational game for kids. The concept is that users get to “walk through the alphabet.” They can interact with objects, see the letters, and hear the words. The hope is that this type of visual and auditory experience will help kids with different learning types. ACU is sponsoring her to conduct research on its effect. A few other students have pitched in to create trailers and splash screens for it.

When it comes to her faith, Adrianna enjoys the atmosphere that ACU provides. “It is a strong community. I have met so many like-minded friends.” She also appreciates the variety of worship opportunities such as Praise Day and DET Chapel, stating, “It is such a different atmosphere, but you are still connecting to God.” To learn more about ACU and is Digital Entertainment program, click here.