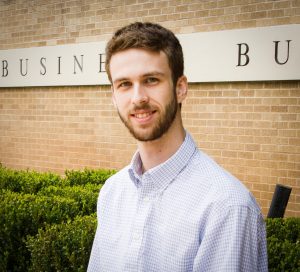 Kevin Shurtz is a senior double majoring in Computer Science and Political Science from Southlake, Texas.

Some of Kevin’s favorite classes have been Operating Systems, Programming Languages, Philosophy Religion, and Science as well as Theory of Computation. Kevin says, “Theory of Computation with Dr. Homer is one of the best classes offered by the University.” The class introduces some of the academic thought and literature that underlies a lot of the advancements in the field of Computer Science. From that class, Kevin learned about finite state machines, regular expressions, multiple categories of languages, and limits of computability. Kevin explained that the class touched on subjects that exceed the scope of vocational purpose, stating, “I don’t think I could have gotten that knowledge outside the context of college.” Kevin said that the class really frames the limits of the field, which is valuable in students’ holistic intellectual growth.

Kevin has been very involved in and out of SITC. Describing tutoring as a great job opportunity for students, Kevin tutored for Computer Organization, as well as Object Oriented Programming. Kevin has also served as the President of ACU’s chapter of ACM (Association for Computing Machinery) and as the Chief Financial Officer for ACU Student Government.

Kevin has completed two internships while at ACU. During his sophomore year, he interned at Faithlife as a software developer on their platform team writing in C#. The next year Kevin interned at USAA on their Enterprise Data Insights team. His team was responsible for making back end java services that would be deployed in containers to a new deployment platform. While there, Kevin worked with Python and participated in a coding competition to help learn how to use Angular. Kevin plans to work for USAA following his graduation this May.

In his free time, Kevin has a few projects that he is working on the first of which is a React tutorial. For ACU student government, he has a few projects in the research phase one of which involves improving the system of recycling around campus. The group wants add Amazon IOT buttons to each recycling bin, so that the bins don’t have to be constantly checked unless they are actually full. Another project is tailored towards improving the student election system. They are currently trying to set up a resource group and back end solutions.

One of Kevin’s favorite aspects of attending ACU is the relationships that you can build with professors. He says, “The professors aren’t just here to teach technical skills, they are here to help you grow on a personal level”. Kevin really respects the faculty, how well versed they are in the Bible and their diverse experiences with their own faith. He says that being able to interact with the faculty throughout the last four years has been incredibly valuable for his own faith. Congratulations to Kevin on his graduation and future work. To learn more about the Computer Science program, click here.