Rachael Shudde (’18) is a recent May graduate who majored in computer science and math from Ovalo, TX. During her time at ACU, Rachael was involved with Mu Sigma, the Honors College, Ko Jo Kai social club, worked as a research assistant, interned in D.C., interned with NASA, and much more. After graduating in May, Rachael will be attending Texas A&M to earn her masters in statistics and will be working with Lockheed Martin as a data scientist and analyst while at school. “Statistics is a combination of everything I like,” said Rachael. “I can work with people, use my computer science and data skills, and help explain problems.” Rachael is particularly excited to attend Texas A&M for graduate school because of their emphasis on astrostatistics and telescopes around the world that yield interesting data. At Lockheed Martin, Rachael is most excited to work on real-world applications of her skills. “It’s very different to solve problems in an environment where someone does not have the answers,” she noted. “It’s also very exciting to work on problems that do not have answers.” 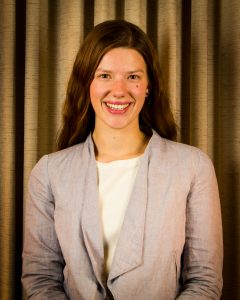 Rachael feels that ACU has prepared her well and the opportunities that she was able to take advantage of are one-of-a-kind. Especially in her areas of study, a lot of Rachael’s work was self-involved and required her to research and actively learn. She learned to establish what she does not know and make a plan to find the answer. Rachael’s love for learning, work ethic, and motivation from her teachers helped her achieve all that she has. However, the biggest impact ACU had on Rachael was not in the academic sphere. “I gained a lot of confidence in myself,” said Rachael. “Because of the faculty and mentors I have encountered, I am confident in who I am and my abilities and very happy with where I am at.” Rachael’s faculty, staff, and peers have all played instrumental roles in her life. Getting involved with her department allowed Rachael to meet awesome people and friends and helped create close relationships with the faculty. “The personal relationships I’ve built here are amazing and so special to ACU,” she said “It is visible how much the professors care.” While Rachael is excited for the future and what lies beyond graduation, she will also miss ACU where she has grown and felt so blessed and ACU will certainly miss her.