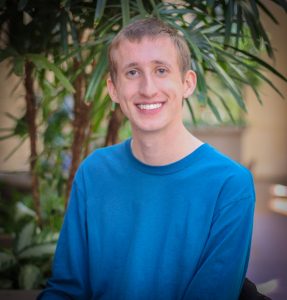 Wyatt Witemeyer is a freshman with majors in computer science and math from Abilene. He started learning to code in high school, but first learned C++ while taking Programming I and Programming II with Dr. Homer which soon became some of his favorite classes, not only for the subject matter but also for the relationship he developed with Dr. Homer. “Dr. Homer’s dry humor makes me laugh. The joke often ties back into the lesson, making the class more interactive and fun.” These classes teach students how to think like a programmer, which has helped Wyatt with his problem-solving and communication skills. “The computer will do exactly what you tell you to do. So, it’s a matter of being able to lay out those instructions is a clear and concise manner.”

Despite this being his first year on campus, Wyatt has already become a tutor for Programming I, a class he enjoyed and further sparked his interest in computer science. He sees this a good opportunity to help others as while also building relationships. He also attends department chapels including 3:16 Chapel, where he enjoys continuing getting to know his professors on a deeper level and engaging in scripture with them. He is also involved in ACU’s E-sports team for Hearthstone.

In his free time, Wyatt enjoys hanging out and playing video games with friends, including a game he designed and wrote himself. His game is about five years in the making and he has been slowly adding to it since he first learned how to code in high school. Wyatt described it as a role-playing adventure game similar to Dungeon and Dragons, but without dice. However, just because it’s functional now, doesn’t mean he’s done improving it. “As I learn more about programming, I am applying it to the game,” said Wyatt. He uses the game as an opportunity to apply what he is learning in school to something he is passionate about outside the classroom and the more he learns, the more he is able to improve the game.

Wyatt chose ACU because he loves Abilene and is very close to his family. Not only do both his parents work at ACU but his older sister, Bethany, is also a student in the SITC department. “The opportunities that ACU offers are amazing. It’s a local Christian School and my family is here, so I couldn’t say no.” Wyatt has had a great experience in his freshman year and looks forward to growing in knowledge, skills, and relationships as well as experiencing as much as ACU has to offer in the next few years.