In May, ACU’s SITC had its first team compete at the Global Finals tournament of Destination Imagination in Knoxville, TN, winning first place in the Maze Craze category at the university level. 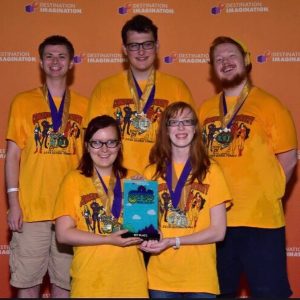 Destination Imagination, or DI as its most often referred to, is a gathering of over 8,000 elementary through university aged students from more than 15 countries around the world. Centered on creativity, the event allows student finalists the opportunity to display their inventive solutions in the areas of STEAM (science, technology, engineering, arts and mathematics), as well as service learning and improvisation. Collin Blanchard, one of the ACU team members who participated, talked to us about the experience.

“DI is essentially, to my understanding, a place to participate in challenges of various types and to grow as a team. I had never heard of DI before, but Korbin Ancell had participated in it for something like 10 years. He told us about it and we decided we could do it at the university level.” Collin went on to explain how the challenge works. 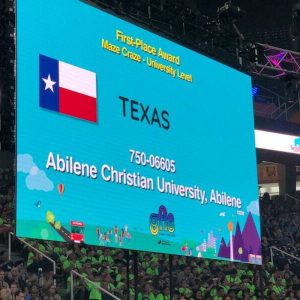 “Each of the levels of competition was pretty similar, especially for us. At each level, we decided to keep our project mostly the same. The part that changed the most was our maze solver, the robot. At the regional level, a last minute change broke the robot entirely, so we had to resort to a remote controlled toy to complete the challenge. At state, our full solution was still not working, so we just controlled our robot with a remote, but at least it wasn’t a toy this time. At global, we had the full solution working, with a camera connected to a raspberry pi and codes that the camera would read to solve the maze and drive the robot for us. Unfortunately, when we arrived at the actual location, the noise from all of the Bluetooth and the glare from a light on our camera meant that we had to resort to driving the robot with a remote again. Our skit stayed the same through all of the levels, aside from missing Isaak at Globals since he started a new job. One last change was the song that we sang during the skit. At regionals, the song was our own lyrics to the tune of “Somewhere Over the Rainbow”. At State and Globals, it was a completely original song that Virginia Pettit and one of our teammates, Matt, wrote together. The skit told the story of unlikely pirates finding buried treasure and teaching a real pirate that friendship is the greatest treasure of all.” 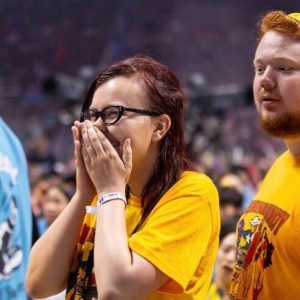 Collin encourages others to participate in this event. “This was a really fun opportunity. If other students have a group that they get along well with and have an idea for one of the challenges, they should go for it! Even if they don’t win, it is a really good chance to build teamwork and use skills outside of the classroom setting.”