Haley McNeese, the president of our Sigma Delta Pi chapter, and Brittany Jackson, the communications officer for the chapter, had the opportunity to talk with Abilene’s Telemundo station about the chapter’s success over the past three years.

In fall 2015, ACU’s SDP chapter was named the National Honor Chapter for the third year in a row out of more than 600 chapters in the country.

The chapter was recognized for its efforts to help translate documents for organizations around the Abilene community and its establishment of a Spanish literary journal on ACU’s campus.

Haley, a senior nursing major from Flowermound, and Brittany, a senior convergence journalism major from Mission Viejo, California, were asked to speak about the chapter’s success.

Both attributed the honor of receiving the award to Dr. Beatriz Walker, the advisor for our chapter.

Omega Gamma organizes many activities to promote Spanish language and culture on ACU’s campus. One of our favorite activities is Noche de Tapas – a celebration of food, language and music.

Omega Gamma proudly partnered with The Grace Museum in downtown Abilene to present a night of bilingual literature as part of ArtWalk. Students read excerpts from the bilingual anthology “Dejame que te cuente/ Let me tell you”, a compilation of immigrants stories from Latin America and Spain, all of whom are now in higher education in the United States.

Download the event program to see and read more! 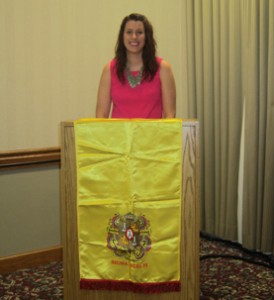 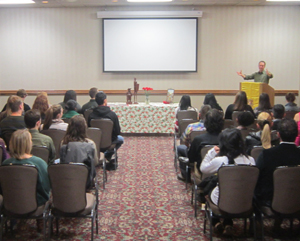 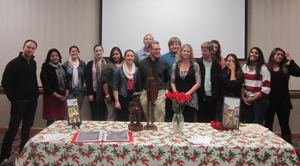 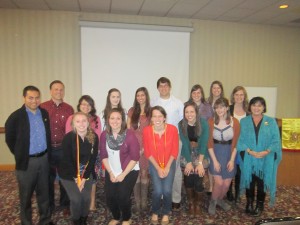 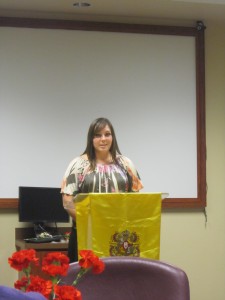 The new members of Sigma Delta Pi were initiated at the end of the 2013 Spring semester! The Ceremony for the most recent members was held in the Campus Living Room where Dr. Cole Bennet, Chair of the Language and Literature Department, recounted his wonderful experiences visiting Spain over the past few years.

Dr. Diana Taylor, from the ACU Speech and Language Clinic, was present to express her thanks to the students who aided in translating paper work. These students were presented with appreciation certificates for their hard work. As the new members were welcomed, goodbyes were said as many members, new and old, were approaching the final weeks of their Senior Year. New officers were elected for the Fall 2013 semester to fill the positions of the graduating officers. President Briana Burton’s position was filled by Jessi Allen, Angelica Zuniga was made secretary, Miriam Quigley was selected to fill Kelsey Roberts’ position as Communications Officer, and Paloma Cavazos was elected to be Historian. 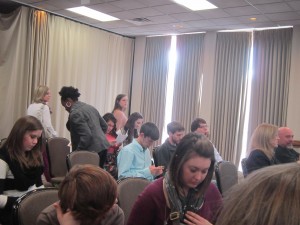 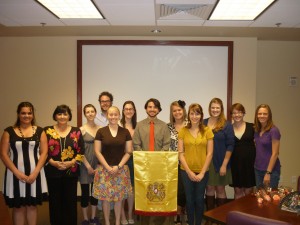 Members of Omega Gamma, the ACU Chapter of Sigma Delta Pi inaugurated in October of 2010 were immediately working on recruiting new members. They also helped with the University Scholar Ceremony, and the annual North American Christian Foreign Language Association’s Conference which took place on the campus of Abilene Christian in March of 2011. 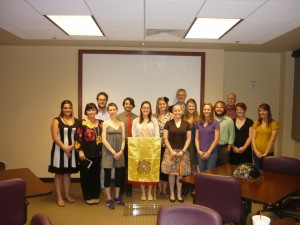 New officers were inducted in the fall of 2011 since three of our four officers graduated. The speaker for that event was Dr. Harland Rall, Chair of the Department of Foreign Languages at Abilene Christian. Officers for 2011-2012 are: President- Emily Miller,Vice President- Kelsey Chrane, Communications- Allison Songstad and Secretary- Kaleigh Wyrick. Other members include: Anthony Godfrey, Caitlin Bradford, Abby Allison, Leah Green, Amanda McAdams. 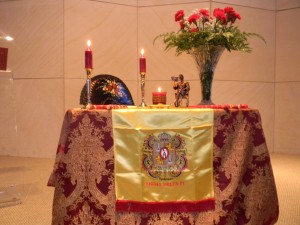 The new school year bring added activities for our Chapter. Kelsey Chrane, Allison Songstad and Caitlin Bradford are working on translations for Christian Homes of Abilene, Texas. President Emily Miller and Vice President Kelsey Chrane are working on a budget to present to the Students Association for the funding of scholarships and different activities. Kaleigh Wyrick is working on research for Dr. Beatriz Walker.

In order to honor the Spanish heritage and language, which is the motto of our honor society, the chapter is preparing a Spanish movie and pizza night on campus this fall.

The following are pictures from the most recent initiation of new members for the 2011-2012 school year. 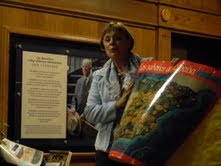 (Left) Teresa Seckler, the speaker, who is from Spain. 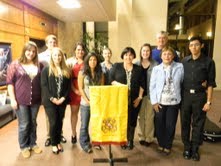 Join us as Sigma Delta Pi celebrates Hispanic Heritage Month on Thursday October 10 from 6:00 – 8:00pm! The celebration will be held at the Grace Museum in downtown Abilene. Members of SDP will be reading excerpts from the Anthology titled “Dèjame Que Te Cuente,” or “Let Me Tell You.” 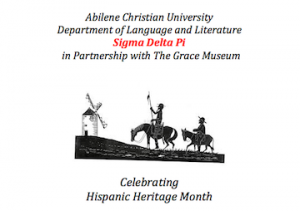 We invite you to come celebrate the beautiful language of Spanish with us by watching a movie about the history and culture of a Spanish-speaking country.

There will be free pizza! Just click the link below to RSVP so we can be sure to order enough. We do ask that you bring your own drink.

Finally, we will be collecting cleaning supplies and personal hygiene items to benefit the IRC, so feel free to bring such things as: 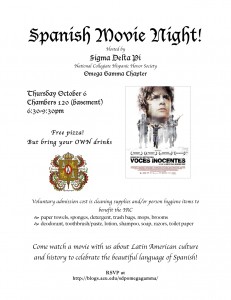