On October 12, 2012, one of COBA’s most esteemed professors, Dr. Daryl Jinkerson, passed away. This past summer, Dr. Vardiman along with Dr. Jinkerson’s family, including his wife Cindy, daughter Amanda, and mother Lavern, went to Honduras to work with the organization Casa de Esperanza , or House of Hope. The Jinkerson family and Dr. Vardiman worked with Perry Jinkerson, Dr. Jinkerson’s brother, and a church group from Starkville, Mississippi. The team engaged in various forms of mission work, including working in the school of the blind, visiting a local prison and hospital, and going to an extremely impoverished area called the “dump”.

The mission team also built a house in memory of Dr. Jinkerson. After five hours of strenuous work, the house was complete and ready for a Honduran family to move in. The money to build the house was collected in donations and cost less than  $2,000 to construct. This was the second house Dr. Jinkerson’s mother, Lavern, had built in honor of a family member. Dr. Vardiman stated, “Building this house truly was a healing experience for all who were involved.” Dr. Jinkerson will always be remembered as a revered son, father, teacher, and friend. He has left an incredible legacy in COBA and the entire ACU community through the way he served others and walked with Christ. The Honduran home built in honor of Dr. Jinkerson reflects the diligence, the hard work, the commitment, the hope, and the strong foundation Dr. Jinkerson personified to everyone whose lives he touched. 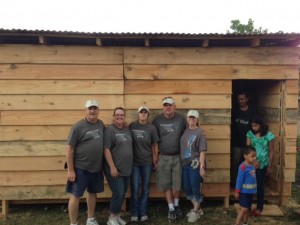