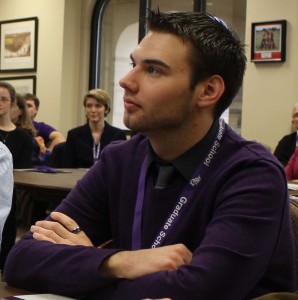 What I Study: My research so far has dealt with the composition and use of music in films.  I have found that the more you know about music, the more you get out of watching a film.  Composers and directors often collaborate in a way that gives clues to what’s going on in a film or even tell a little inside joke to those who might be watching/listening for it.  Most recently, I have been researching the prolific use of classical music in films and comparing the original backstory of the piece’s composition to the story it is now being paired with.

Why I do research:  I’m very new to research, but I love it.  I became interested in doing additional research in music through one of my English classes with Dr. Delony.  She pushed me to try new ideas and apply what I already know to different areas of study.  My favorite part of research is just being knowledgeable about different topics and fields and creating connections between them.