Recently, students in Business Law and Introduction to Business, had the opportunity to hear from nationally known economist Dr. Russell Roberts. Dr. Roberts was invited to campus as part of the Undergrad Research Festival. 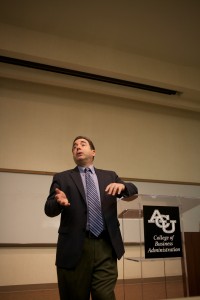 Russell Roberts, Associate Editor. Russell Roberts is Professor of Economics and the J. Fish and Lillian F. Smith Distinguished Scholar at the Mercatus Center at George Mason University. Before coming to George Mason University, Roberts was at Washington University in St. Louis where he was the founding director of the Center for Experiential Learning at the John M. Olin School of Business and a Senior Fellow at the Weidenbaum Center on the Economy, Government, and Public Policy. Roberts has also taught at the University of Rochester, Stanford University, and UCLA. He holds a Ph.D. in economics from the University of Chicago.

Roberts is a regular commentator on business and economics for National Public Radio’s Morning Edition. In addition to numerous academic publications, he has written for the New York Times and the Wall Street Journal. Professor Roberts is especially interested in communicating economics to non-economists. His first novel, The Choice: A Fable of Free Trade and Protectionism, a jargon-free book on international trade written for the non-economist, was named one of the top ten books of 1994 by Business Week and one of the best books of 1994 by the Financial Times. An updated and revised edition was published in the spring of 2000. His new book is The Invisible Heart: An Economic Romance (MIT Press, 2001).

Russ Roberts is the host of EconTalk, economics podcasts available here and through iTunes. He blogs at Cafe Hayek along with Don Boudreaux 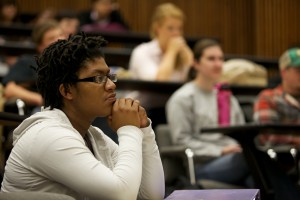 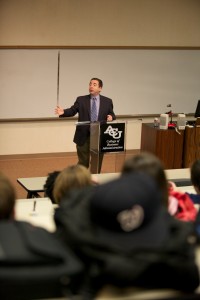 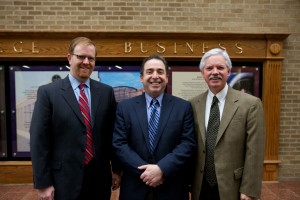