Riding the train from Oxford to London

Last Friday, COBA in Oxford hopped aboard our very first train to London. Excitedly, we stepped onto the platform of Paddington station. As we separated into groups, we were given our itinerary and left to explore the city until mid-afternoon. Most of us decided to take the tube (the subway) to the British Museum. We stood in the bustling station, confusedly trying to decipher the different lines and stops necessary to get there, as well as trying to avoid all the people who actually knew where they were going. Amidst the confusion, two of us were separated from the rest of the group. I happened to be in the minority. 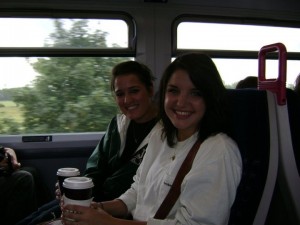 Do not be concerned. My fellow derelict, Leigh Foith, and I did arrive safely at the British Museum, only to find our classmates visiting the ancient Egyptian pharaohs! This was a pleasant surprise, considering the magnitude of the museum itself, not to mention the traffic of visitors wandering its varied exhibits. After taking our individual allotments of history, different groups of us left to find some lunch. We then met, professors and all, at Trafalgar square to begin our tour of the Palace of  Westminster, otherwise known as the Houses of Parliament. 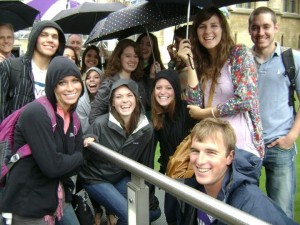 Waiting in the rain for the Parliament tour

We went through security and emerged into a huge stone building, with high wooden ceilings and steps leading up to Parliament itself. Our tour guide explained the history of the palace, and how it has affected England’s political system throughout hundreds of years. That huge stone building we first came into had been standing for almost 1000 years. It was so interesting to hear the history of England while we stood on the spot of its occurrence. And the art! The Palace of Westminister was extravagantly built by Queen Victoria; the richness and details of murals, carpeting, sculptures and the throne itself were astounding.

Our tour over, most of us took the train back to Oxford, and several left for Edinburgh, Scotland. The next day, a group of us girls went back to London for some shopping and the Queen’s royal birthday parade. We found the royal family, Portabello road market, and the lovely Hyde Park. A perfect combination! It was a busy, but unforgettable weekend. 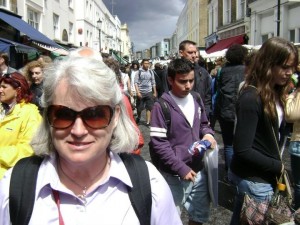