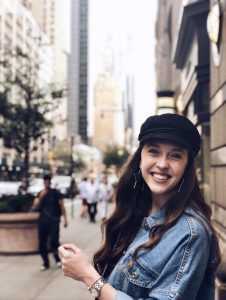 Ever since she was a little girl, Sloan Polvado has had an obsession with fashion – specifically, shoes. Sloan has always wanted to work in the fashion industry and this summer has had the opportunity to fulfill that dream.

Sloan, a junior marketing major from Sugar Land, is interning with Steve Madden in New York City in the production department. She aids in preparing the production schedules, helping set up timetables that allocate Steve Madden resources to manufacture and sell their shoes. Sometimes, Sloan will get to try on the new designs and give the design team feedback on them and recommendations for adjustments.

Sloan has loved getting to learn more about the fashion industry. “It has been awesome to see all of the work that goes into creating a shoe – the different materials and styles as well as the numbers and math – and taking it from design to a store,” says Sloan.

The Steve Madden internship program itself has also taught Sloan a lot. “Knowing that I will be contending with talented and driven people like the other interns in this program for a job after graduation has taught me that I have to do everything I can to make myself as competitive as possible,” she noted. Of the thirty summer interns, Sloan is the only one from the south and has found it interesting to compare ACU and her college experience with the other interns. The program has helped Sloan realize how competitive it can be in the professional world and the work that goes into distinguishing yourself when looking for internships and jobs. Outside of gaining practical experience, she has loved connecting with the people around her. She has also had the opportunity to meet Steve Madden himself, who loves getting to know and interacting with his interns. “Steve is a really fun and approachable guy,” according to Sloan. “He will always look at your shoes before making eye contact with you.”

She is excited to return to Abilene with new knowledge and a new motivation to prepare for a job after graduation. “I have learned so much valuable information about the fashion industry, what it is like to work in a major company, and networking connections with those around her – oh, and the free shoes aren’t too bad either.”