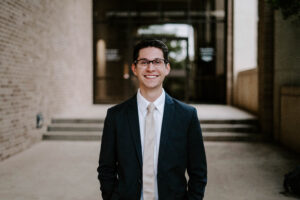 Nick received his undergraduate degree in ministry and vocation this past May before he began working with the College of Business Administration. He told us that he is excited to learn about everything that goes on in COBA and to be a part of some of the events that he was not involved in as a Bible major.

Nick said, “I became interested in this position because of my previous experience working with SGA (Student Government Association) and Midnight Worship last year as a student at ACU. While I was Chief of Staff, I had a lot of administrative tasks that I learned that I really enjoyed doing and I was also part of a team that helped create strategic yet meaningful events and ideas for ACU’s campus. The position at the Lytle Center combined the best of both worlds!” 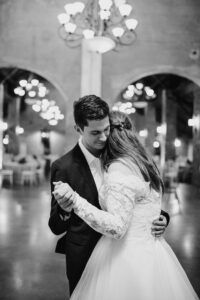 Nick and his wife, Sarah

Nick recently married Sarah Ross Gonzales (’20) who he met during his freshman year at ACU. His hobbies “Include loving photography and actively taking pictures with my camera, playing guitar and drums, as well as being the most avid John Mayer Fan.”

Nick is a great addition to the COBA and Lytle Center team. We encourage our students to come by, meet him, and learn how you can become involved with the Lytle Center.