COBA professors have been in a researching groove lately (as Don Pope would say, “They must be butter; they’re on a roll.”). We have seen professors such as Dr. Monty Lynn, Dr. Ryan Jessup, and now Dr. Dennis Marquardt, continue to conduct important research and have their work published in industry journals. Dennis Marquardt recently wrote a paper entitled: “Leader Goal Orientation and Ethical Leadership: A Socio-Cognitive Approach of the Impact of Leader Goal-Oriented Behavior on Employee Unethical Behavior.” The paper was written with co-authors Dr. Wendy Casper at UT-Arlington and Dr. Maribeth Kuenzi at SMU.

We asked Dr. Marquardt where his motivation and inspiration to work on this research came from. “For the past decade, I’ve been fascinated by the idea of ‘unintended consequences,’ specifically as this applies to leader/follower dyads. In other words, are there attitudes or behaviors that managers engage in that don’t necessarily seem unethical, but may have the consequence of unknowingly encouraging unethical behavior among employees.” 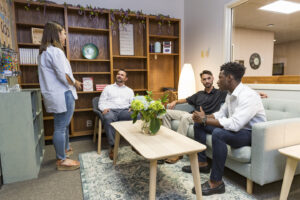 Dr. Marquardt summarized the concepts in the research and what type of consequences can come from such situations saying, “In this paper, we propose that leaders with high levels of a performance-avoid goal orientation are perceived to be less ethical and in turn, encourage employees to engage in unethical behaviors. Performance-avoid goal orientation refers to the extent to which a person approaches tasks or goals with a desire to not look incompetent compared to their peers. When a leader has such an orientation they are likely to send cues and signals to employees that making mistakes is to be avoided at all costs, that having the appearance of incompetence is unacceptable, or that making the leader look bad is a cardinal sin.”

He continued, “These cues and signals don’t seem unethical on their own, but imagine what they might do to employees over time. If I’m constantly hearing about avoiding mistakes and failures and trying to not look incompetent, what do I do when I actually do make a mistake? We propose that you might have a higher propensity to consider covering things up, blaming others, or lying about your performance. Our study analyzing several hundred leader/follower dyads found that leaders with high levels of avoid-goal orientation have significantly lower levels of ethical leadership (as perceived by their followers) and have employees who are more likely to engage in unethical behavior. Only when leaders also had a high learning goal orientation did the effects of avoid goal orientation become non-significant.” 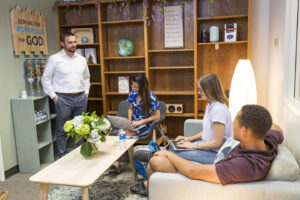 Having this paper published is definitely a feeling of joy and accomplishment for Marquardt. “This paper has been in the works since 2014 and out of all my published papers, it’s the one I’m most proud of. God is good! There are many times I was going to give up on it because it took so many hours of work over these past six years. I’m thankful for great co-authors who are people I respect and people who have modeled a learning goal orientation for me.”

Dr. Marquardt’s paper “Leader Goal Orientation and Ethical Leadership: A Socio-Cognitive Approach of the Impact of Leader Goal-Oriented Behavior on Employee Unethical Behavior.” was published in the Journal of Business Ethics this May and is available for reading by clicking here.