My task was to locate a photograph of Foy Esco Wallace, Jr. I found it easily enough, but as often is the case, I saw additional interesting things along the way.  In Special Collections we have several filing cabinets full of biographical and congregational files.  These files could have almost anything in them, clippings by or about a person, photographs, church bulletins, tracts, obituaries, correspondence… you name it. They are a rich deposit waiting to be mined.

In our Church Leaders Vertical File for Foy Wallace we have two clippings from Firm Foundation, a church paper out of Austin, TX.  Pertaining to Wallace’s debate with Baptist mega-church pastor J. Frank Norris in Ft. Worth at First Baptist Church, the clippings feature cuts of the exterior of the building and of the massive crowd inside the main auditorium.  I had previously looked for a photo of the exterior of the building (to no avail), and yet here it is.  And the crowd shot is amazing.

For anyone interested in the power of personality, the power of the spoken word, the rhetorical arts and the rhetoric of debate, and the history of Churches of Christ in the 1930’s…this is a really neat photograph.  Too good not to share.  Enjoy! 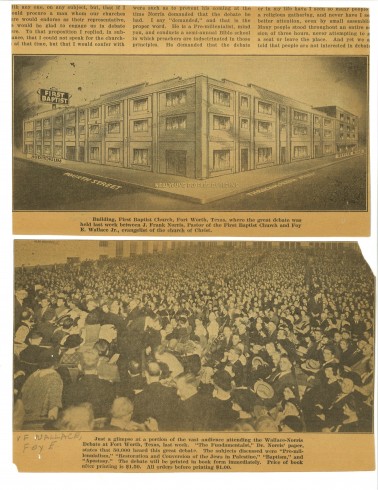 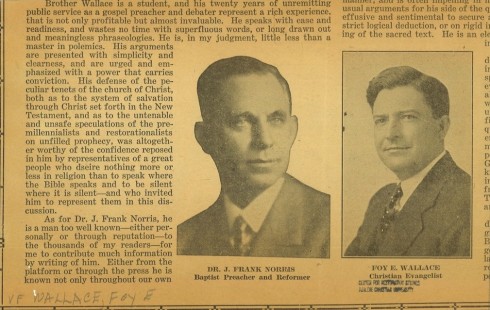 Terry J. Gardner, “The Influence of Foy E. Wallace, Jr.” in Warren Lewis and Hans Rollmann, Restoring the First-century Church in the Twenty-first Century: Essays on the Stone Campbell Restoration Movement in Honor of Don Haymes. Eugene: Wipf and Stock, 2005.