I present to you the first edition of the second season of the new and improved Jessup Pope (JP) College Football Rankings in which we rank all 128 college football teams in the bowl subdivision based on their performances through the first 9 weeks of the current season.

Last season, Don Pope and I introduced our ranking system which uses a modified version of the Google PageRank algorithm – the algorithm that jump-started the search engine giant and still underlies their current approach today – to allow it to rank teams instead of webpages.  We also enabled it to account for home field advantage and temporal decay of performances (this is where games early in the season weigh less in the rankings than more recent games), among other things.

You might recall that last season we ended with the same final 4 as the college football playoff (CFP) rankings and predicted that Alabama would defeat Clemson in the Championship by 5.7 points, a game Alabama won by 5 points.  Our model (a) beat Las Vegas and (b) correctly predicted the winner of the bowl games 51.2% of the time.  For us, that is not good enough.  So, in the offseason we grabbed more seasons of college football data to help our system better learn and made a few additional modifications to supercharge the system.  When we finally got around to running our new version on last season’s data, we found that it beat Vegas 61% of the time and correctly predicted the bowl game winner 56% of the time.

Before we get into the rankings here are a few quick reminders: 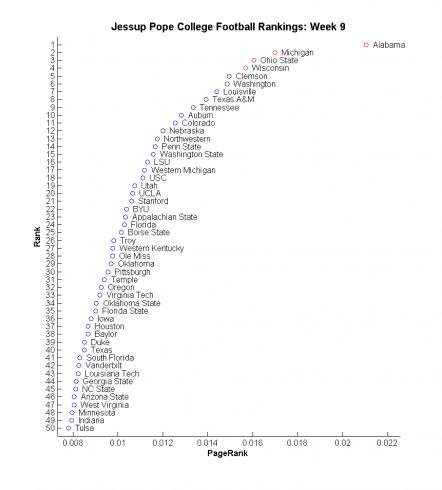 No one should be surprised that Alabama and Michigan are ranked at the top.  Our high ranking of Wisconsin is consistent with their strong performances against quality teams, despite their two losses, both against teams that we rank higher (Michigan followed by Ohio State at #3).

My guess is that undefeated Clemson and Washington will round out the CFP’s top 4 in the first ranking of the season which will be released on Tuesday; though, our model suggests that they are currently on the outside looking in.  Baylor and West Virginia’s losses this past weekend simplified the problem that would have otherwise arisen – people wondering why those two undefeated teams were ranked so low.