by guest blogger and marketing major from Japan, Noah Bastable

Hello wildcats and welcome back to our weekly blog post on the Jessup Pope College Football Rankings!

This week is the tenth week of college football and we’d like to talk you through some noticeable changes since last week. 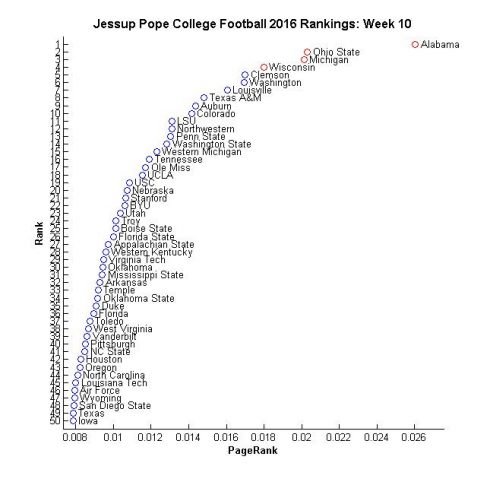 Our top four teams – Alabama, Ohio State, Michigan, and Wisconsin – remain the same but their order has switched.

LSU lost to Alabama but they went up in the rankings from 16th to 11th. The score was close until Alabama broke the scoreless game in the last quarter by scoring 10 points.

Ole Miss shot up through the rankings from 28th to 17th after a 37-27 win against the Georgia Southern Eagles.

Nebraska went down from 12th to 20th after their staggering 62-3 loss to Ohio State.

The most interesting turnout, however, was one between two of our home state teams, Baylor and TCU.  TCU “clobbered”, as Ryan Jessup put it, the Bears 62-22 defeating them so badly that their running back was sidelined for attitude issues. Perhaps there is a silver lining in the Bears-Frogs game, the lesson learned that no matter how rough a game may get, one must always maintain a right attitude.

That is it for this week. Come back and check us out again next week for more of the new and improved Jessup Pope College Football rankings! Go Wildcats!!