Dr. Katie Wick has a Ph.D. in economics and teaches classes in microeconomics, macroeconomics, and game theory at ACU. Last semester, Dr. Wick worked on registered replications of two famous social science papers with student Rachael Shudde, whom Dr. Wick has mentored throughout her time at ACU. They were a part of a replication with 24 other universities to test the results of these papers to see if they still held. Dr. Wick and Rachael had just under 400 participants in their section and the meta-analysis of the whole replication had 8,000 participants. Dr. Wick was named Mentor of the Year at ACU’s Undergraduate Research Festival for her work with Rachael. 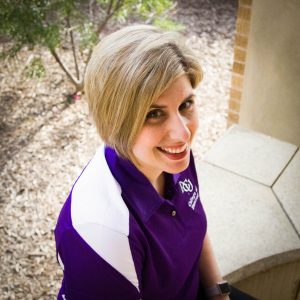 The premise of the first paper was on hostility and how people view actions as hostile or not based on whether they were primed with angry words or regular words. The second paper, which was presented at ACU’s research festivals and others, focused on the effects of moral priming against cheating. Participants were presented with a test that asked them to solve twenty matrix equations and then write down the number of matrices that they solved. Only half of the matrices had solutions and participants were asked to solve each one in four minutes. If participants reported solving more than ten matrices and more than four minutes were used to solve problems, then the participant was cheating. Before taking the test, participants had to complete a priming task. The control prime was to write down ten books the participant read in high school and the moral prime, which was being evaluated to see if it had any effect on cheating, asked participants to write down the Ten Commandments. Dr. Wick was particularly interested in this replication at ACU because students are constantly morally primed. There are bible verses on the walls, chapels, and Christian professors who consistently integrate faith into their classrooms. Dr. Wick hypothesized that the moral priming task would not affect the participants at ACU as they are morally primed every day, which turned out to be true.

Beyond guidance through the project, Dr. Wick mentored Rachael through a major life transition. Dr. Wick has known Rachael since she was a freshman at ACU. Rachael approached Dr. Wick wanting to learn more about how to prepare for a Ph.D. in economics. Dr. Wick counseled her to study math, which became Rachael’s first major and has continued to walk with Rachael during her time at ACU. Throughout the project, Dr. Wick wanted to prepare Rachael for graduate school. Rachael had the task of taking all 400 experiments and inputting the test into a database for analysis. “I wanted to prepare her for the grunt work she will encounter,” said Dr. Wick. “The leap between undergraduate and graduate school is even bigger than the leap between high school and undergraduate school. It’s not glamorous and very hard.” Rachael wrote code to analyze the data, expecting the results to point to the original paper’s hypothesis that the moral prime decreased cheating. “I thought I had coded wrong,” said Rachael. “I was surprised to see that the ACU data contradicted the original results. That is my favorite part of data analysis: when you expect something to happen when you find results that are surprising.”

Rachael presented their findings on the cheating experiment at ACU’s Undergraduate Research Festival and at the Southwestern Psychological Association Conference. Dr. Wick was nominated by Rachael Shudde and won the award for Mentor of the Year at ACU’s Undergraduate Research Festival. “Dr. Wick is awesome and dedicated to research,” said Rachael. “She has a desire to answer questions and is good at designing and interpreting experiments. She is also great at giving feedback and guidance, which was invaluable throughout the research process.” Dr. Wick is grateful for the time she has been able to spend with Rachael and looks forward to seeing what she does during and after school.