Judith Barajas (’16) knew working and living abroad was something she wanted to do eventually after she traveled to Oxford with COBA as a student in the spring of 2014. She just didn’t expect to be back in England so soon.

Barajas, a marketing major with a minor in international business, became very involved at ACU through Ko Jo Kai and the ACU chapter of the American Marketing Association. She traveled abroad again in 2016 when she led a team of 10 students on a mission trip to Honduras with Mission Lazarus as an officer for the Collegiate Entrepreneurs’ Organization.

After graduation, Barajas moved to Dallas, Texas, and accepted a job as an account manager at PFSweb, an 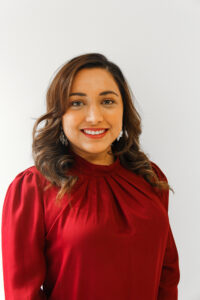 eCommerce fulfillment provider. During her three years with the company, she worked with multiple accounts that helped her learn about different business models. As she grew professionally, she knew she wanted to expand that knowledge. So, in the summer of 2019, she took a leap of faith, quit her job and moved to Barcelona, Spain, thanks to her love of different cultures and travel.

Barajas continued her education in Barcelona, receiving her master’s in international business from EAE Business School in the summer of 2020. With the uncertainty of world markets during the pandemic, it became almost impossible to find work abroad. However, her experience with PFS in Dallas had gone so well that the company reached out to her after graduation and offered her a job in its new office in the UK. Barajas moved to London in October 2020 and is contracted to work there for three years.

While the last few years have been a roller coaster, Barajas is extremely grateful for where she is right now and looks forward to more adventures ahead, noting that “God’s timing is simply the best. It was definitely a challenge, but I had faith it was the best time of my life to make such a decision. I am extremely happy to have had a great experience and learned so much about business in other countries, not only through school but also through my classmates. My graduate school class represented 28 nationalities!”

It is not lost on Barajas that she is living in a place where she once studied as an ACU student. “The craziest thing is that after I studied abroad in Oxford, I promised myself to move back one way or another. Oxford will always be in my heart. Little did I know it would happen this soon.” 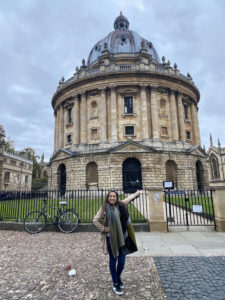 Barajas continues to stay in touch with professors like Dr. Monty Lynn and Dr. Ryan Jessup to offer ways she can help educate and mentor COBA students who hope to live out their own adventures.