Series introduction: Alexander Campbell (1788-1866) was born and grew up in Northern Ireland. In 1807, his father Thomas Campbell (1763-1854), a Presbyterian minister, emigrated from Northern Ireland to western Pennsylvania and sent for the rest of the family to join him in 1808.  Shipwrecked on the western coast of Scotland, the family spent almost a year in Glasgow before joining Thomas in 1809. During that time Alexander studied at the University of Glasgow. In 2019 I set out to visit the places in Ireland and Scotland that are the backdrop for this crucial year in his life. Travel with me as we retrace his journey in three posts: the Homeland, the Interruption, and the University of Glasgow. 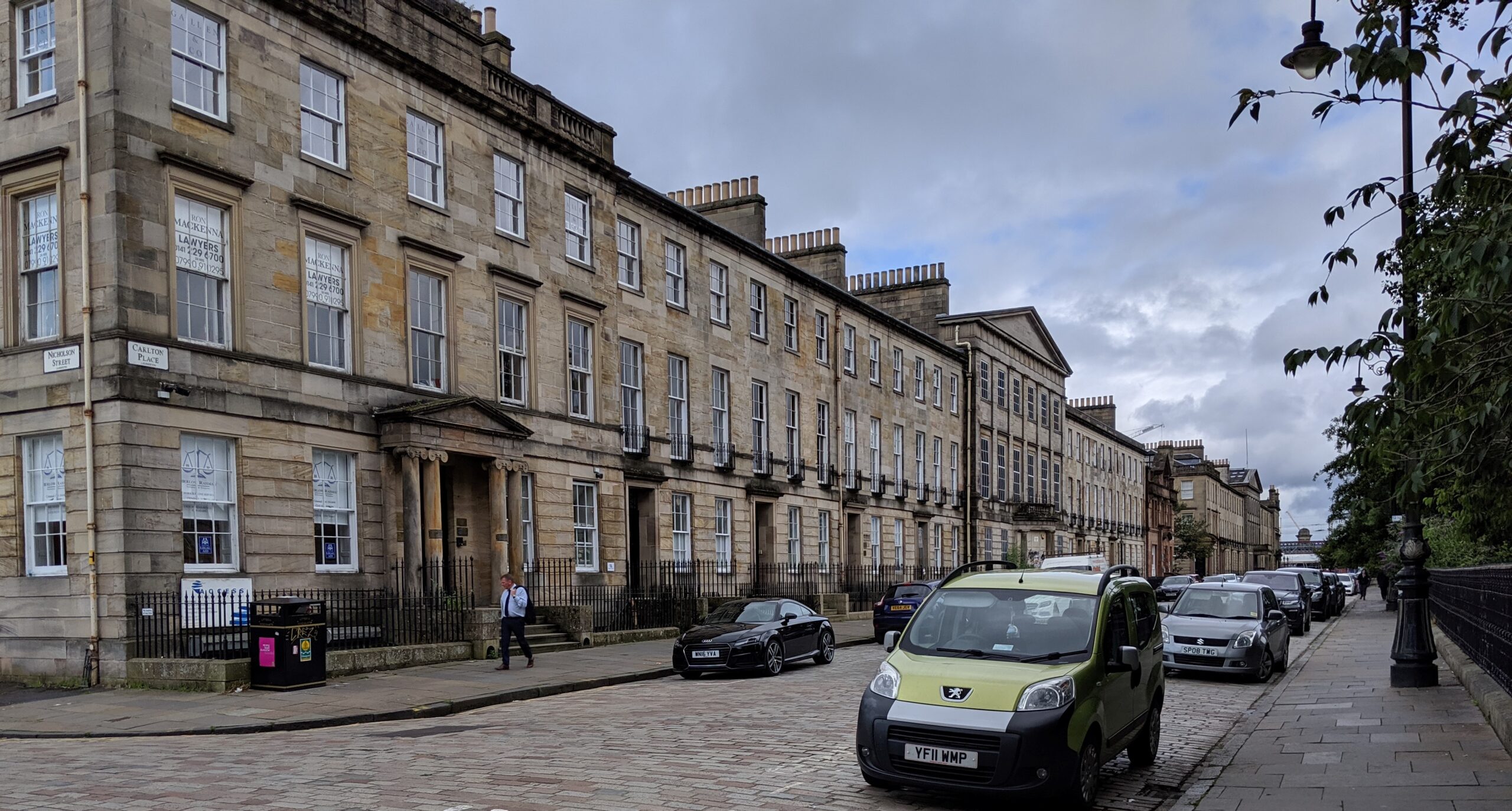 Greville Ewing lived at #4 Carlton Street, on the block just east of this location, on the south bank of the Clyde River. A courthouse now stands where Ewing’s home was. This block from that era begins with #40.

Young Alexander walked up to Greville Ewing’s door to present his letter of recommendation. Ewing was the minister of the Jamaica Street Tabernacle, an Independent meeting place. Ewing hospitably invited him in to spend the night and the next morning connected him with another minister who helped Alexander find furnished lodgings for his family on Broad Street, in Hutchinsontown. Ewing often invited young Alexander to meet leaders in the Independent missionary movement. During his year in Glasgow, Alexander found himself growing more “favorable to the principles of Congregationalism entertained by Mr. Ewing, which secured an entire emancipation from the control of domineering Synods and General Assemblies, and which seemed to him much more accordant with primitive usage” (Richardson, vol. 1, p. 189). 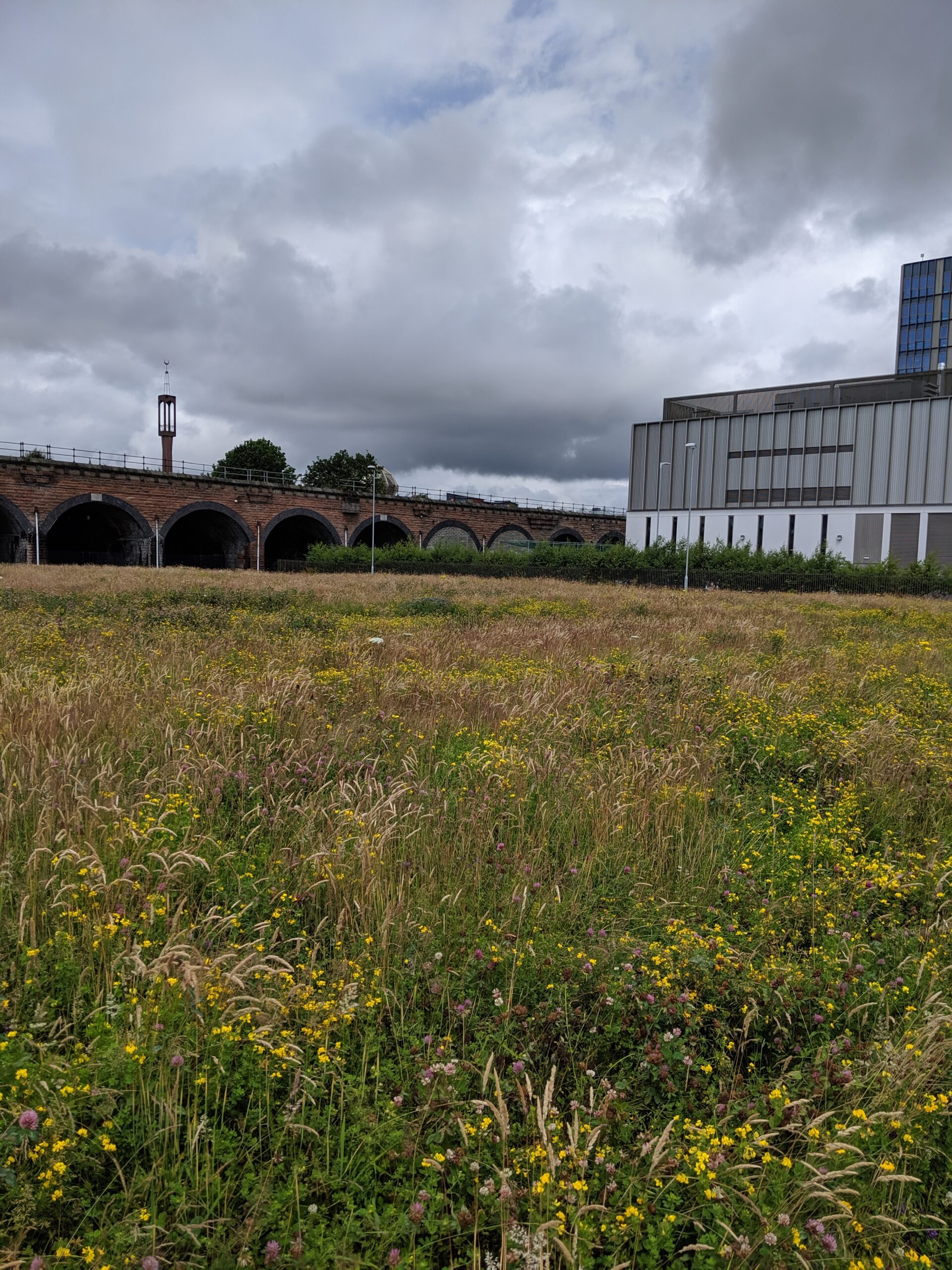 Broad Street was converted into a railway which crosses the Clyde River via the City Union Bridge. The railway passes between the modern Central Mosque and the Riverside campus of the University of Glasgow on the south bank of the Clyde.

Hutchinsontown was a densely populated neighborhood of mostly immigrants from Scotland and Ireland who were working in the industries of Glasgow. The Hutchinsontown Bridge, replaced by the 1871 Albert Bridge, crossed the river to the old city which lies on the north bank of the Clyde. 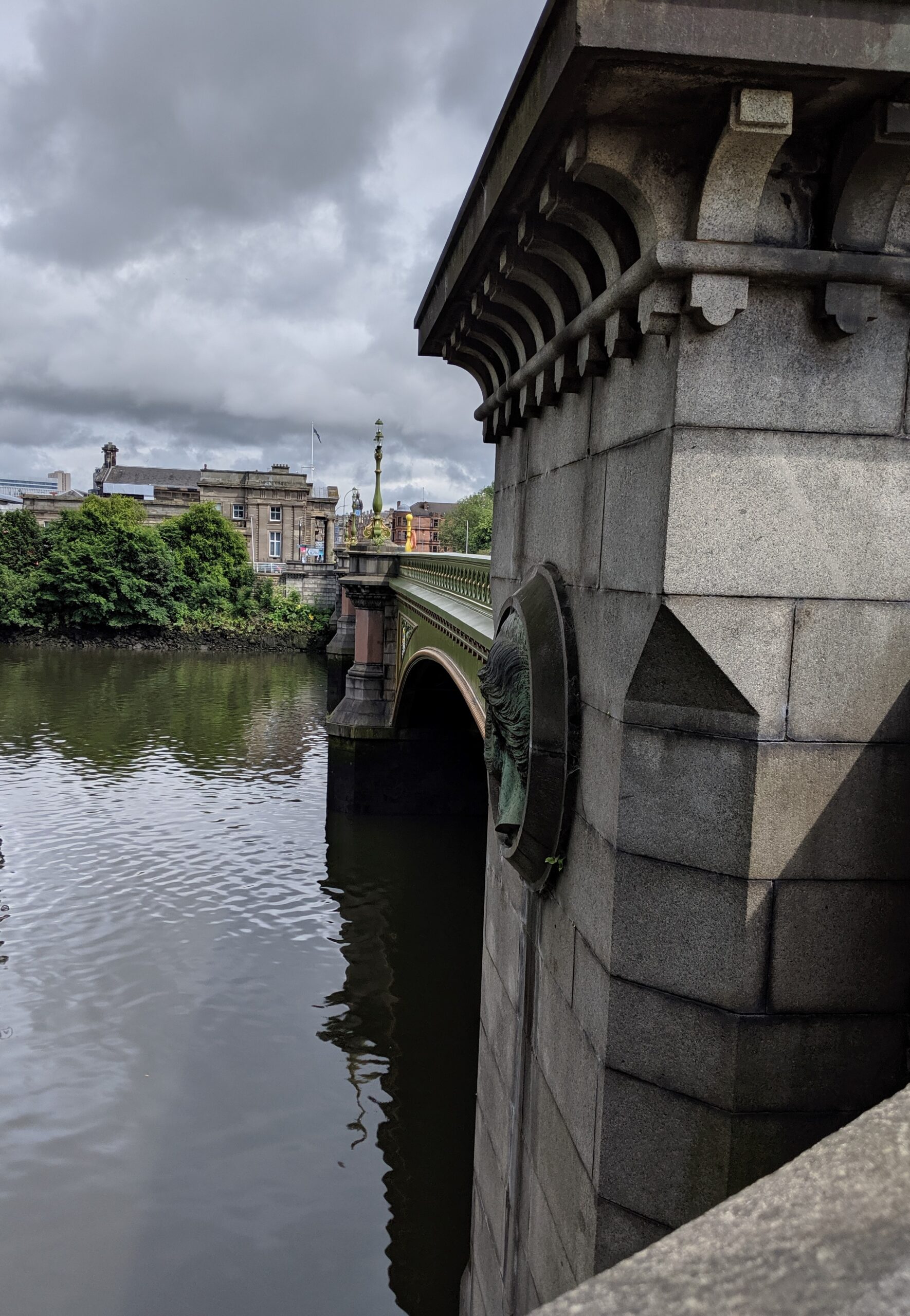 During Alexander’s time in Glasgow, the Hutchinsontown Bridge crossed the Clyde River here connecting the south side to the old university and cathedral district. The Albert Bridge which replaced it was built in 1871.

Founded in 1451, Glasgow University lay on High Street near Glasgow Cathedral until the college relocated to Gilmorehill in the West End of the city in 1870. 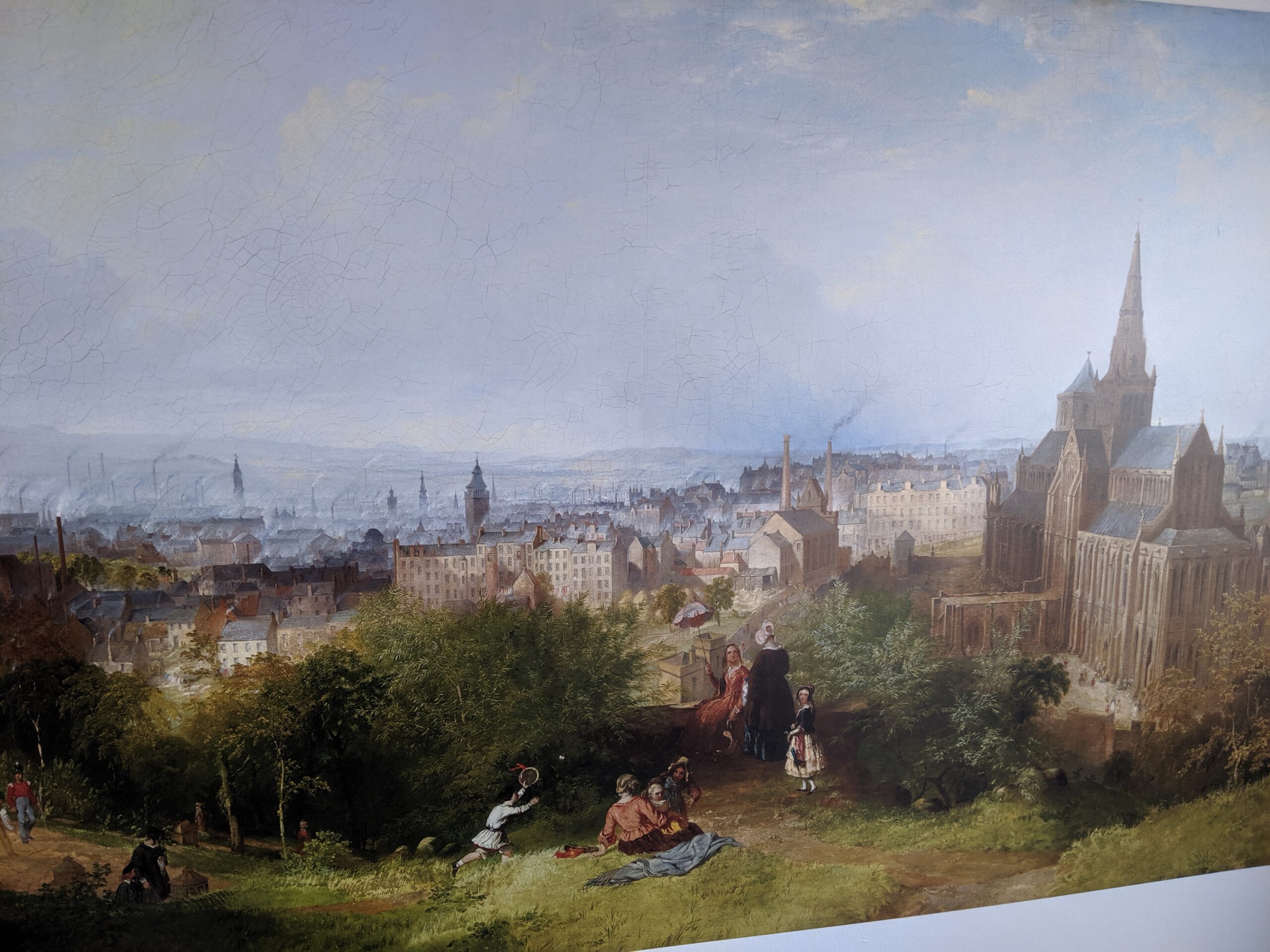 View of Glasgow and the Cathedral, 1840s, by John Adam Plimmer Houston (1812-1884), St. Mungo Museum of Religious Life and Art, Glasgow. The University is the multi-story building in the center, with a tall dark tower.

Glasgow University was a vibrant seat of the Scottish Enlightenment during the time that Alexander, and his father Thomas before him, attended there. 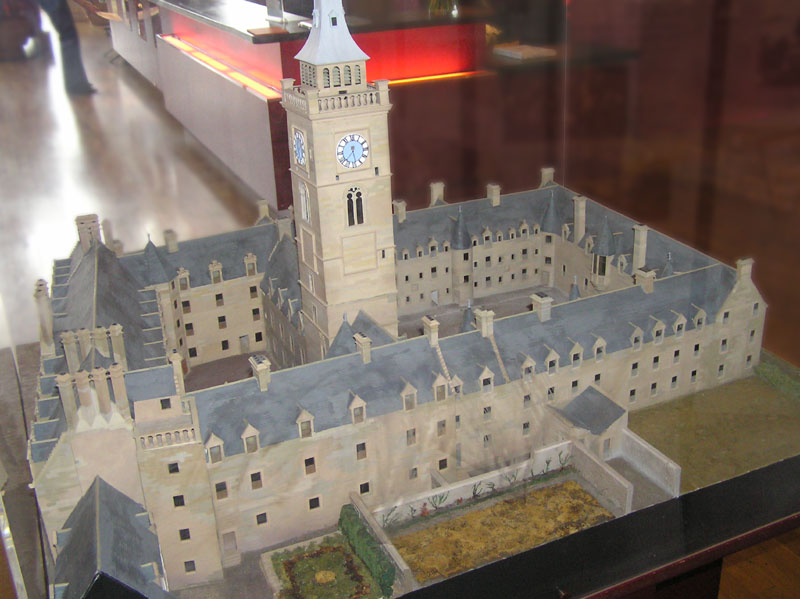 Model of the Old College. A model of the original buildings of the University of Glasgow in their old location on the High Street of Glasgow. This model is on display in the University’s Hunterian Museum. Photo taken May 7th 2004 by Finlay McWalter.  Transferred from en.wikipedia to Commons by Kafuffle using CommonsHelper., CC BY-SA 3.0, https://commons.wikimedia.org/w/index.php?curid=12763668.

When Alexander enrolled in the university, he would have come and gone through this gatehouse which faced High Street. 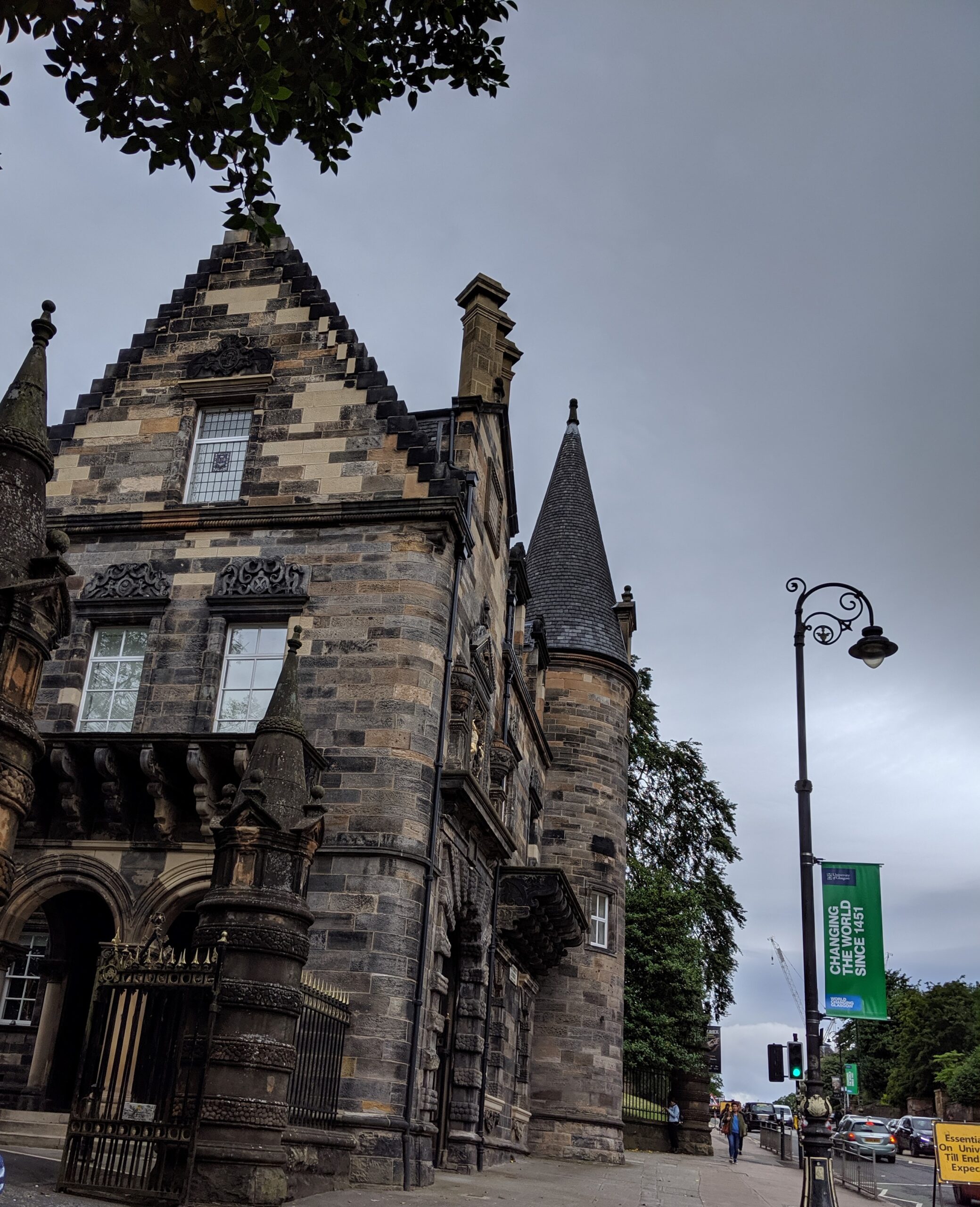 The High Street gateway to the old Glasgow College was moved to the new campus in the West End in 1870. First built in 1658, the building is now named Pearce Lodge.

Alexander enrolled in three courses: Greek with Prof John Young, Natural Philosophy with Prof. Andrew Ure, and Logic and Belles Lettres with Prof. George Jardine. Alexander’s notebooks from these classes survive and are held at Phillips Library at Bethany College, WV, and at the Disciples of Christ Historical Society, Bethany, WV. 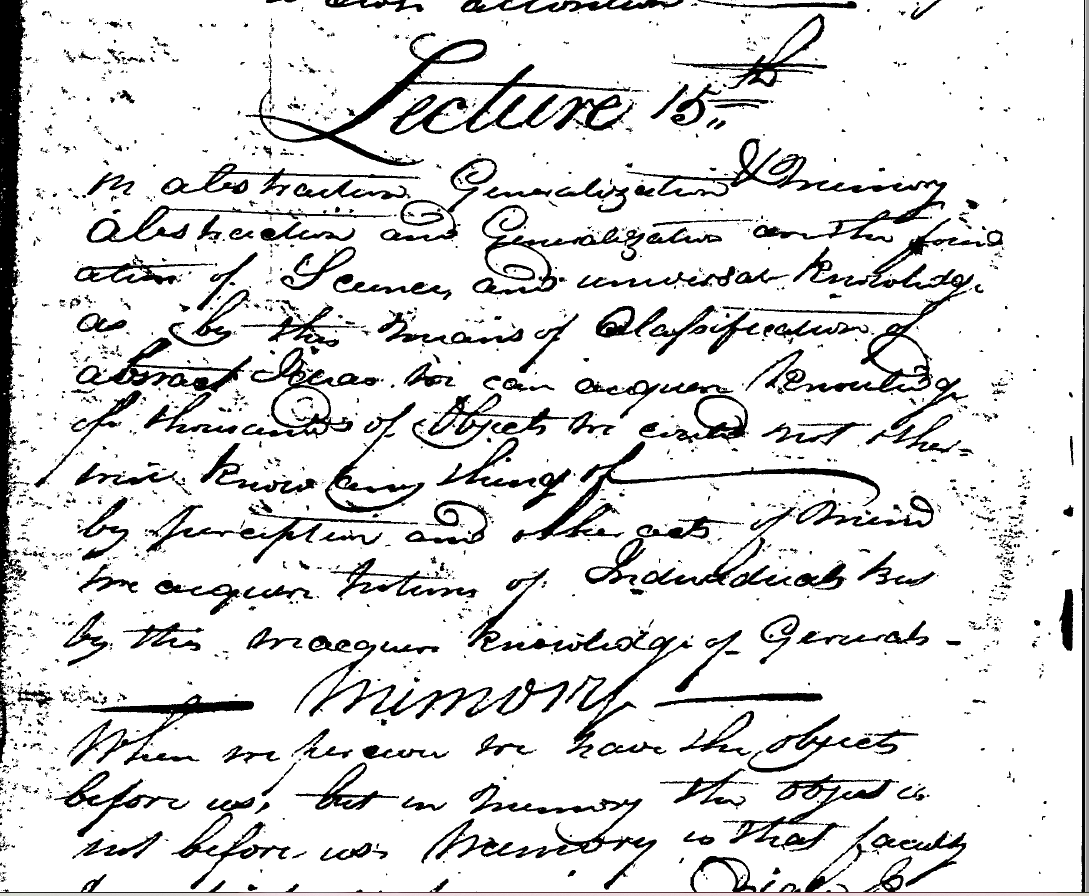 Manuscript L, which contains Alexander’s notes on Jardine’s class on logic. The fifteenth lecture, on Memory, occurred Dec. 2, 1808. This manuscript is held at Phillips Library of Bethany, WV.

Professor Jardine, who had also taught Thomas, was a curriculum innovator who examined how people know, learn, and communicate. He was also a founder and board member of the Royal Infirmary, a charitable hospital for the needy, opened in 1794. The Infirmary is now a huge hospital complex. 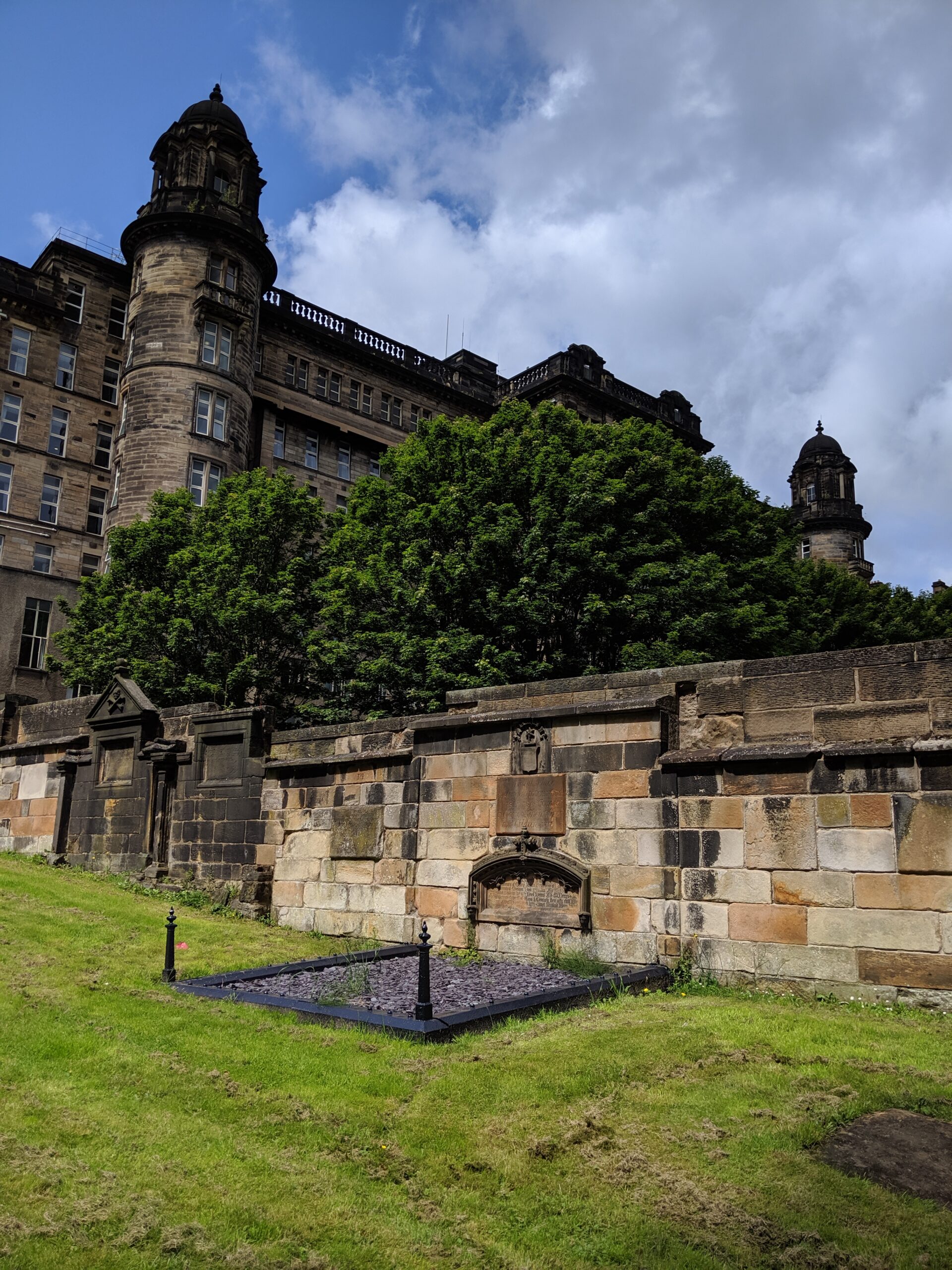 The family grave of George Jardine on the northwest side of the Glasgow Cathedral lies under the shadow of the Royal Infirmary that Jardine helped found. 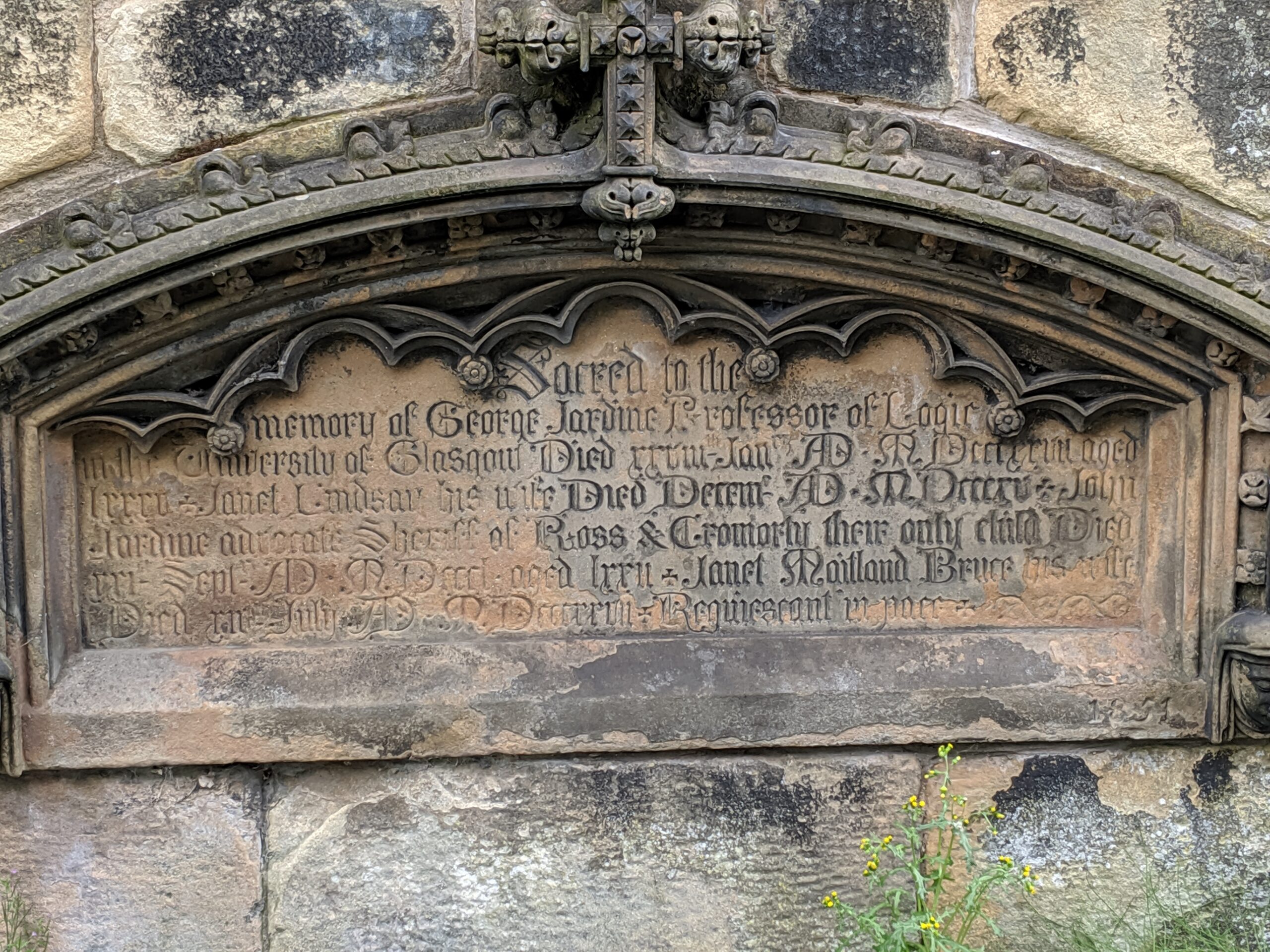 George Jardine (1742-1827) is buried in a family plot on the northwest side of Glasgow Cathedral.

During his time of study at the University, Alexander would go to the Glasgow Cathedral precinct for quiet times of reflection. He revisited the site and the adjacent Necropolis in 1847, on his only trip back to the lands of his youth. 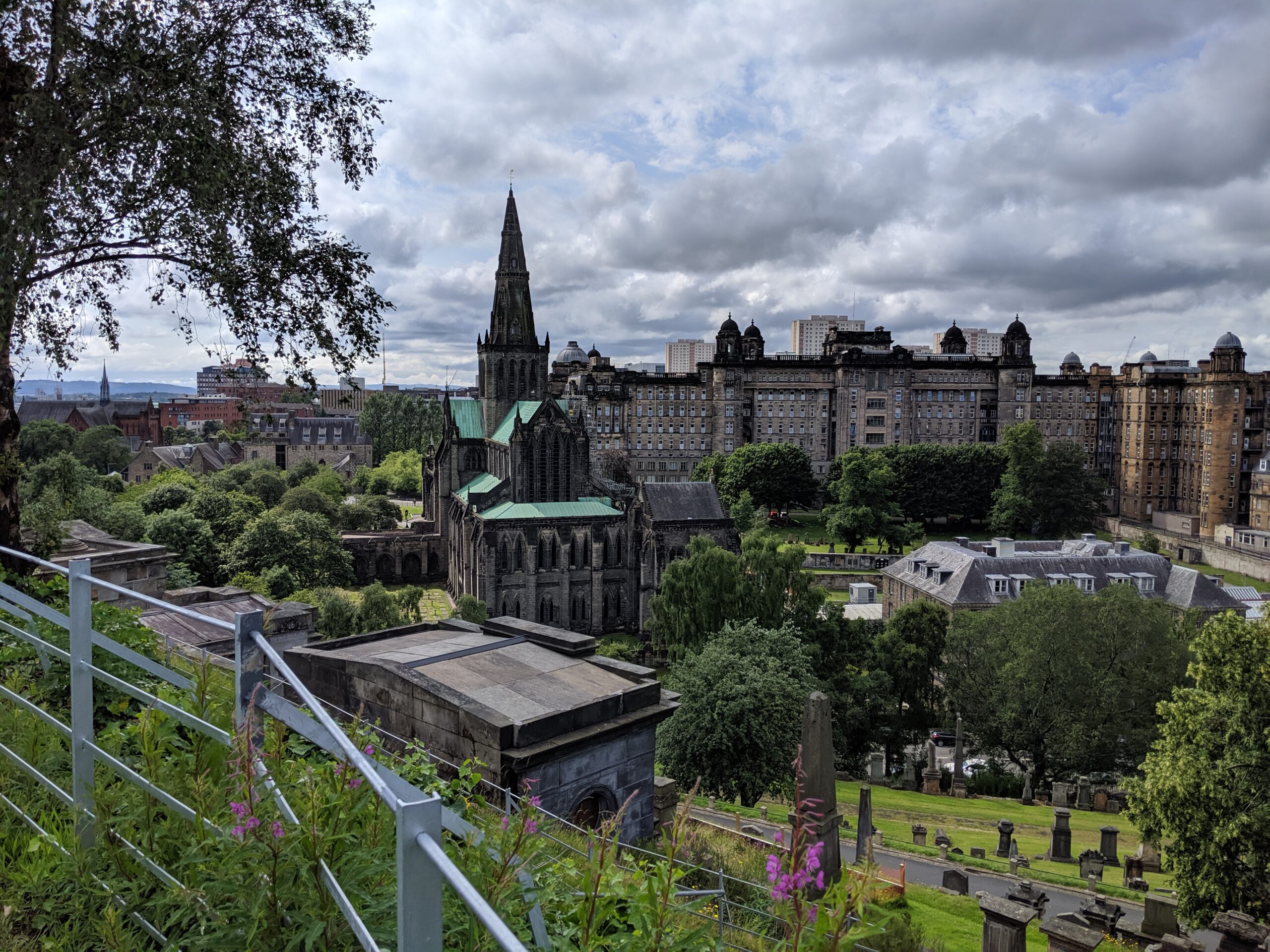 Glasgow Cathedral with its tall spire and green roof from the hill of the Necropolis. The Royal Infirmary with its domes lies just beyond the church. 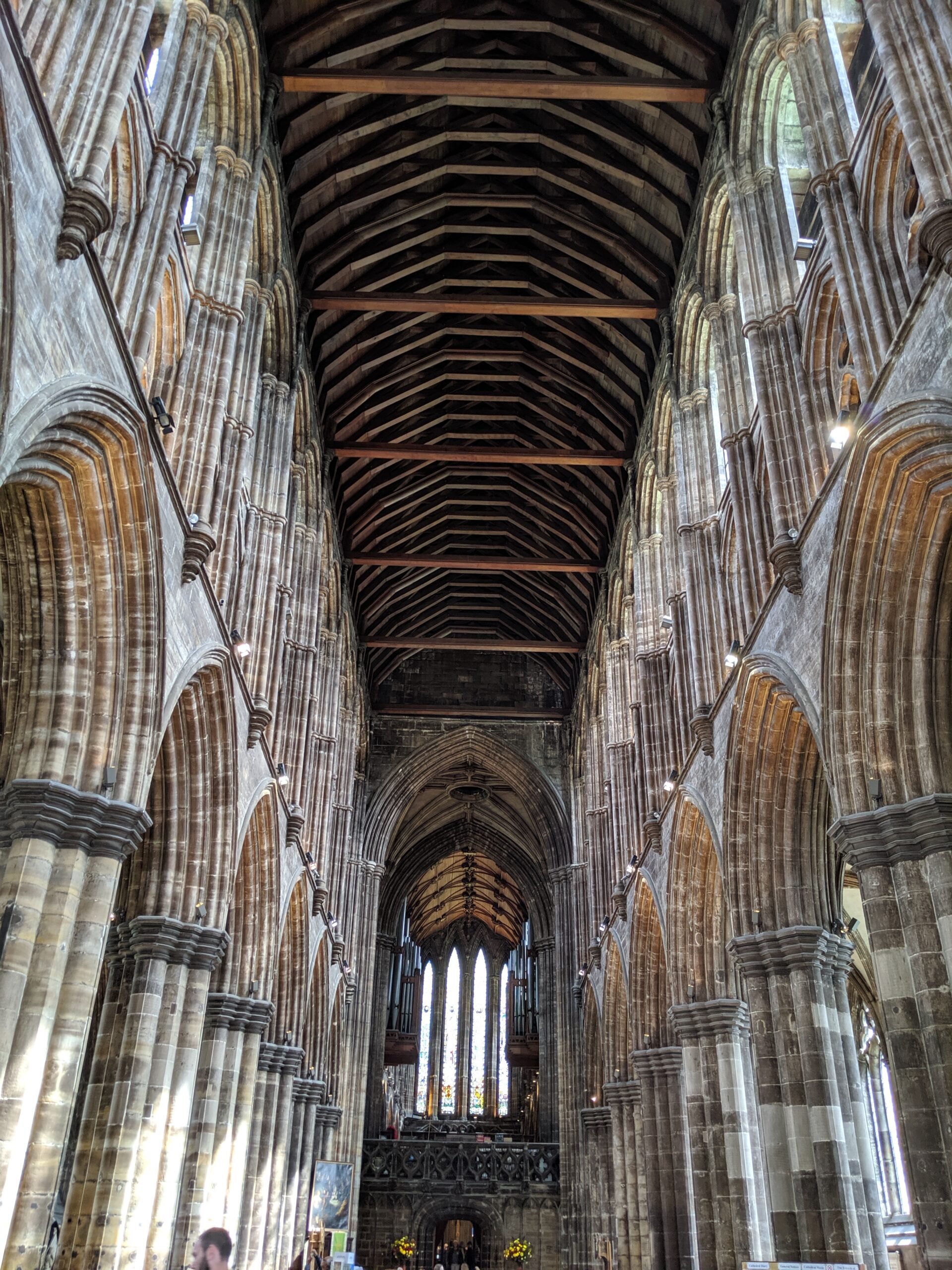 The choir of the Glasgow Cathedral, facing east.

When Alexander’s school term ended in May, the family began to prepare to travel again to the United States. For about five weeks, Alexander worked in Helensburgh, a resort town across the Clyde northeast of Glasgow, as a tutor to children and young ladies of several wealthy families who had summer homes there. 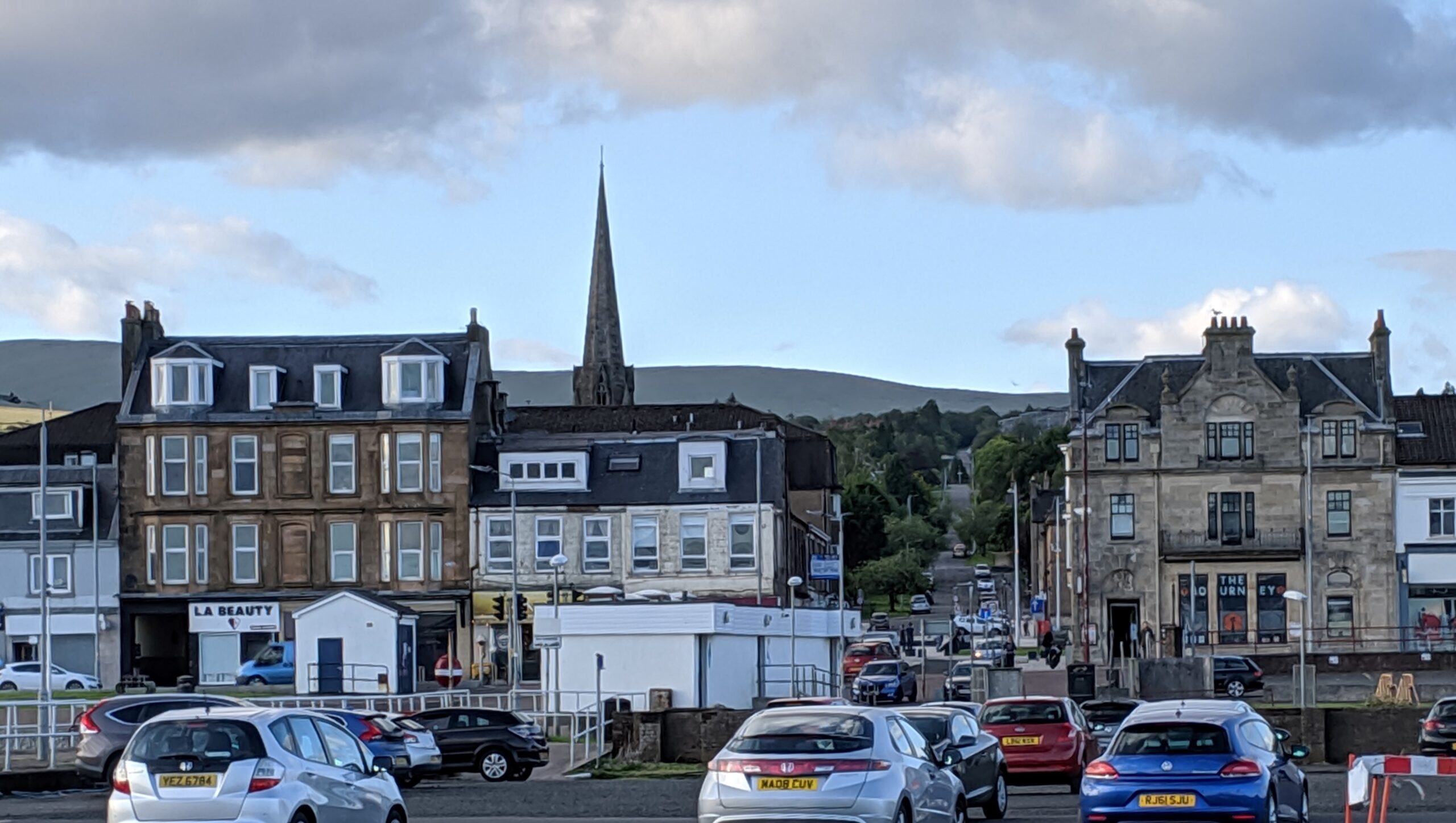 The waterfront at the resort town of Helensburgh, which lies on the north shore of the Clyde at the foot of the Scottish Highlands rising to the north.

Richardson comments (vol 1, p 191) that Alexander’s obligations as an escort for the young ladies on outings to visit the beautiful countryside took so much time that he didn’t get quite as much reading done as he had planned to do.

Helensburgh lies on the north shore of the Firth of Clyde, facing the port of Greenock on the south bank of the Firth. Beyond the town to the north rise the hills of the Scottish Highlands.

In June Alexander returned to Glasgow to buy tickets for the family’s voyage to America on the Latonia, which sailed from Greenock for New York on August 3. After eight weeks at sea, the Latonia arrived at New York Harbor September 27. The family then sailed from New York to Philadelphia, arriving there October 9, and then hired a wagon driver to take them to western Pennsylvania. Father Thomas met them on the road on October 19, two and a half years after their separation. The reunited family arrived in Washington, Pennsylvania, on October 21, 1809, to begin their life together and their new mission in the new country.

Open-Access photographs selected from my trip retracing Alexander’s journey to Glasgow are available for free download at ACU’s Stone-Campbell Teaching Archive for use in teaching. Read more about the Campbell family and Alexander’s life in Memoirs of Alexander Campbell by Robert Richardson (Philadelphia: Lippincott, 1868) and in Doug Foster’s A Life of Alexander Campbell (Grand Rapids, MI: Eerdmans, 2020).