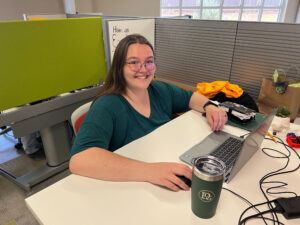 Alissa Davis didn’t have that luxury.

When Davis – who is pursuing her Bachelor of Science in Digital Entertainment Technology (DET) with an emphasis on Video Game Design and is on target to graduate in May 2023 – started her apprenticeship with Funeral Director’s Life Insurance Company on June 1, she had no choice but to get right to work and help her co-workers make it through one of the saddest moments in the recent history of the country.

Just one week before she began, 19 students and two teachers at Robb Elementary School in Uvalde lost their lives to a mass shooter. When Davis began her apprenticeship, she was immediately charged with helping to set up and monitor live streams of approximately 15 of the funerals that stretched over several days.

It was a tough and emotional task and one that Davis hasn’t fully put into perspective.

“I still haven’t fully processed the emotions that came with it,” said Davis, who is a senior from Stephenville. “There were several times during the services when I had to completely turn the sound off and momentarily step away from my desk where I was monitoring the live stream because I couldn’t handle the sound of the parents grieving for their lost children. There was always a tense aura in the department because we needed to do better than our best and ensure that everything went as smoothly as possible for those families and the community, who suffered great losses.” 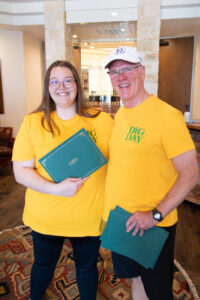 Around July 1 when her boss returned from Uvalde, Davis was assigned a new responsibility to create short training videos for both new and regular clients to watch and learn how to use the FDLIC streaming product. Despite the difficult and emotional circumstances, Davis had quickly made a name for herself at the company. So much so that at the end of her apprenticeship, Davis was awarded the Performance Plus Award, which is awarded by the FDLIC’s Board of Directors and had never before been presented to an apprentice.

The award is given to an employee who shows outstanding qualities that fit several of the 22 non-negotiable traits of the company. Normally, the person who receives the award is recognized by another respected employee of the company and awarded at a company-wide meeting at the end of the month. However, Davis’s above-and-beyond effort resulted in her receiving this remarkable reward.

“I was stunned,” Davis said of the moment when she was announced as the winner of the award. “I knew that I helped the team, but I discredited myself as able to receive praise because I never went there personally or interacted with the people in person as the rest of the team did. So, when it came time to recognize the winners, I was completely stunned to see my name there.”

By the end of her second week, Davis said, she was fully trained and up to speed on almost everything a normal employee in the FDLIC Encore Department would know. The Encore Department is the technology used to live-stream funeral services.

“I had to quickly learn how to do so much more than an ordinary apprentice should in less than one week,” Davis said. “By my third day, I took on responsibilities as if I was another full-time employee because I wanted to do anything I could to help make the lives of my bosses and co-workers easier. They needed to put their focus and full attention on the devastating matter at hand and give the funeral directors on site their undivided attention and assistance.” 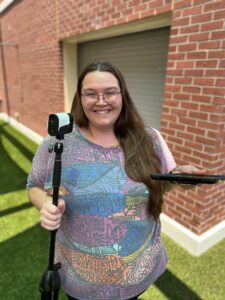 was on the job for two months and will have a full-time job waiting for her when she graduates. In the meantime, she was offered a part-time job when the apprenticeship was over and she’s currently working in that job until she can begin her full-time job. And after some time there, her goal is to pursue a career with her DET degree because her true passion is video game design.

She credited ACU and COBA with getting the apprenticeship and learning to use her imagination to be as creative as possible.

“ACU had the connections for me; I would not have learned about this internship in the first place without them,” Davis said. “Being at ACU has helped me come out of my shell, so I can take the leaps of faith and go for something I want. My time at ACU has also taught me to think quickly on my feet so that I can learn how to do what I need to do quickly to be able to give back to and help others.

“The best thing about being a COBA student is having the opportunity for freedom to create whatever I can imagine,” she continued. “And if I can’t do it because I lack the skill, I have friends and professors around me who can and are actively willing to help because want to see me succeed.”