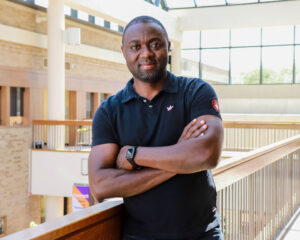 Growing up in Cameroon as the oldest child in a family of five, Dr. Joseph Manga never imagined where his life would take him.

Four different universities for undergraduate, graduate, and doctoral work, as well as tutoring and teaching experience, have all been part of the experience. And this past summer, it led him to Abilene Christian University and the College of Business Administration where he is teaching Management Information Systems.

Manga now joins the full-time faculty as a tenure-track assistant professor of Information
Systems and Management Science. None of this was what Manga expected to be his life’s work
while living in Cameroon. But as he would come to learn, God had other plans for his life.
“As we know, many may be the plans in a man’s heart, but the Lord determines the end,” he
continued. “I began with Mathematics, did a little bit of Computer Science, and then moved on
to business (MIS). This all worked out because I didn’t just want to be crunching numbers and
not know how to interpret them. So, I developed my love for learning from my personal
experience. As an introvert, I thought that doing something that would keep me from talking to
people would be great. That’s why I’m so passionate about research. That was all my plan. But
God’s plan was to send me to love and talk to people.”

Knowing all of that, it still took a chance conversation with a friend that pointed him toward
teaching and meeting the needs of young people.

“I vividly remember sometime in 1998 a friend walked up to me and said, ‘I see you as a
teacher,’ “ Manga said. “I didn’t want to hear that because I never wanted to teach, partly
because of my personality. But as I applied myself to learning, I realized there is more to
teaching than just transferring knowledge. It involves mentoring and discipleship, which are
godly assignments that we are called to fulfill. I believe that teaching brings transformation to
many when it is done in a godly way. That’s why I’m excited to be part of a family and
community that focus on raising a holistic generation in terms of spiritual academic formation,
who will, in turn, move on to serve and transform their world.”

He’s also motivated by the memory of his father, who passed away last January. Manga is the
first person in his family to attain a doctorate, and he attributes his decision to reach the
highest level of education to his father, who worked as a janitor at the university Manga
attended in Cameroon.

“My dad was a strong motivator and proponent for pursuing education, which is a passion for
me now – to see young people educated,” Manga said. “As a janitor, my dad would wake up
very early to go clean the classrooms before students started classes. I still remember one
instance when my dad’s supervisor verbally demeaned him, and I felt bad. But I decided to get
to the highest level of education and use it to honor the janitors who keep our work
environment clean. It was an awful life experience, but it served as a challenge to the
educational experience I have today, which I see as a blessing.”

During all of his academic work, Manga has continued his research in several different areas of
management information systems, technology, information security policy compliance,
business analytics, health information technology, cyber security, and many others.
“Research is a passion,” Manga said. It’s one way to apply my background knowledge in
Mathematics, which is problem-solving. Identifying problems and looking for ways to provide
solutions to these problems is what drives me into research. Finally, I see research as making a
little contribution to academia and giving back to the community.”

Manga has also worked as a Men’s Ministry Coordinator at Abundant Grace Community Church
in Edinburg and as a tutor while in Wichita Falls. And he’s kept up with a family that includes
wife Clarise and four children: Abijoy (9), Solien-Pearl (6), Zoe-Ann (5), and Joe-Praise (4), all of
whom he calls “inquisitive disciples.”

And now the family of six has found its way to Abilene and ACU where Manga is ready and
willing to serve as God leads.

“I am passionate to serve, especially in an environment that aligns with one’s beliefs and
values,” he said. “When the opportunity opened to be part of a culture and institution that
trains godly business leaders in whatever capacity they find themselves, I was glad to jump on
it. God opened this door and I love to follow His lead.”