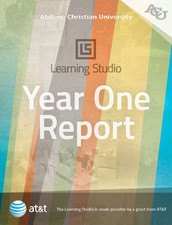 Stay tuned for the Learning Studio: Year One Report. Here’s one of the profiles from the iBook.

Last fall, Lawson Soward and Caitlin Bradford submitted their first film to the Sundance Film Festival. It started with a conversation in January 2011 about a story idea Caitlin had been chewing on. The two of them began artistic design for the production in our screening room during the student grand opening in February. Lawson was the first in line in March when Canon made DSLR cameras available for checkout to student filmmakers. And the two of them spent Spring Break editing in the media lab where Adobe After Effects made the final montage possible.

Since 2004, students have produced 100 films for ACU’s FilmFest, a student short-film competition. The contest began as an iMovie contest with Apple providing access to iMacs and digital camcorders. By 2011, most entries were edited on Apple’s FinalCut Pro, so the move to DSLR cameras shooting HD video was a natural next step. Paul McAniff from Canon joined us for a pro video workshop the week before FilmFest officially kicked off, making Canon 5D bodies and pro-series lenses available for checkout through the Learning Studio.

The result of this unprecedented access and opportunity is a film like “Hazel & Jack.” At the FilmFest premiere downtown at the historic Paramount theatre, Lawson and Caitlin went home with 10 awards, including Best Picture, Best Director and Best Writer. The film wowed industry judges at the symposium the next day, where Randy Brewer, executive producer at Revolution Pictures in Nashville, Tenn., was the first to encourage them to submit their film to other festivals like SXSW and Sundance. “FilmFest was exciting to be a part of this year due to the beautiful photography in a lot of the pieces,” said Brewer. “I use the Canon 5D in music videos I shoot with major artists and the increased image quality really showed in the student films.”