In the third installment of On Design, the Learning Studio’s joint collaboration with ACU Art & Design, we sat down with the lettering artist and designer Simon Walker.

You’ve probably seen Simon’s work—his eye-popping lettering adorns the cover of a recent Brené Brown book, as well as plenty of magazine spreads and many of the food and drink labels you’ll come across on a casual grocery store run. Before going into business for himself, Simon got his start as a designer at the Austin agency GSD&M.

Following a recent lettering workshop with ACU Art & Design students, Simon was kind enough to sit down and share his wisdom with us.

Learn more about the On Design series »

Behind the Scenes with the Big Purple Marching Band

This semester marked the first ACU football season in the brand new Wildcat Stadium, and among the first students to set foot on the turf were members of the Big Purple Marching Band. We followed them all season, from summer rehearsals in the August sun through their halftime performances at center field during ACU home games. Take a look inside ACU’s Big Purple Marching Band in our latest video, above.

We also followed the band through a complete Game Day experience in the new stadium in one of our 360-video projects this semester. The video is best viewed in a Chrome browser or using the Vimeo app on a smartphone or tablet. The project was filmed with an insta360 Pro camera that combines 6 wide-angle lenses stitched together into the final video.

Since January one project we’ve been excited to share with the campus is our new Lightboard in the main studio. We’re currently piloting the tool with faculty in a few classes, and look forward to making it more broadly available in the future. Join us next Thursday in the Adams Center for a quick tour. 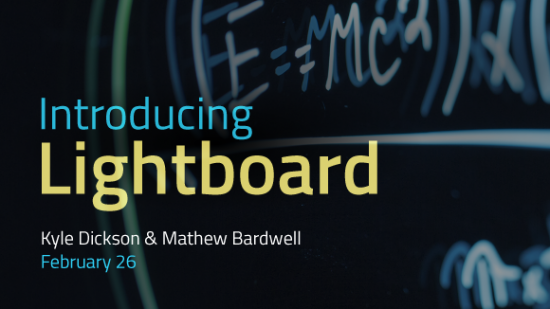 If you find yourself regularly describing key ideas visually through diagrams, outlines, or images on a whiteboard, we’d like to introduce you to Lightboard. This spring we’re piloting a new video tool in the Learning Studio that gives faculty the ability to create video content with annotations quickly and easily. Join us for lunch and a demonstration of the newest addition upstairs in the library.

Over the last two years, students in Dr. Mark Hamilton’s honors sections of BIBL 211: Message of the Old Testament have produced short films in teams. Groups of four develop short 4-5 minute video projects that reflect on themes such as lament, sacrifice, atonement, among others.

Once groups have selected biblical texts they consider how they respond “to the historical background, literary shaping, theological purpose, and interpretive history (i.e., the understanding of the text on the part of later readers) of the given text.”

Here are a few other elements of the assignment:

1. The video should not use footage created by other people. (So, no Lego Bible stories or similar things.)

2. The video should include appropriate voice work by all the team members and should show some measure of creativity.

3. The team should produce a script for the video and submit it along with the video.

4. The video should be well-informed by deep reflection on the biblical texts and themes on which students have been working.

We Are Makers released

Last week we released a short documentary on the Maker Movement as part of broader discussions on campus about the value of “learning by doing.” We’re pleased to share it with the ACU community as so many here on campus contributed to its final shape.

We spent several weeks in March interviewing key voices thinking about the impact of making in different contexts—in community centers and libraries, in education and museums, and in hackerspaces and online.

We’ve already had a chance to thank those who welcomed us into their makerspaces and workshops while shooting in Austin and NYC, but we did want a chance to share a few of the Abilene connections.

The production of the film itself just reminded us how many makers surround us here in Abilene, making this a logical spot to open a makerspace of our own.