Special Collections and Archives is pleased to announce seven issues of a rare early twentieth-century periodical, The Shepherd’s Voice, are now available online for full-text browsing and download.

In September 1897 the Churches of Christ mission to Japan was just a few years old.  W. K. Azbill and John Moody McCaleb, joined by Eugenese Snodgrass, arrived in 1892.  Snodgrass had been in Japan since 1888 under the auspices of the Foreign Christian Missionary Society.  The McCaleb mission, however, was supported only by local Churches of Christ and individuals in the United States apart from missionary societies or missions boards.  After a separation from Azbill, Snodgrass and McCaleb, along with Carme Hostetter, whose work is described in the first issue here, pioneered the independent missionary presence of the Stone-Campbell movement in Japan.  The Shepherd’s Voice is one of the earliest, if not the earliest extant, periodicals to document and raise awareness and support for this independent missionary work.  As such it contains a trove of information about the mission activities, offering primary source material unavailable elsewhere.  For example, the first issue contains a nice portrait of Hostetter and a photograph of her school along with a series of “inductive Bible lessons’ that reveal the kind of teaching the mission conducted.

“The Shepherd’s Voice, writes the Editor, “besides recording current Eastern religious, literary, and social news, is the only magazine in Japan devoted especially to studying and teaching the Bible.”*  Subscribers in Japan paid 50 sen per year; subscribers outside Japan paid one dollar.  While subscriptions were available to readers in the United States, presumably especially the Americans who supported the mission, the paper is primarily directed to a Japanese readership.  Significant portions of the articles in the 1898 issues are in Japanese and the 1898 issues reproduce portions of a debate Snodgrass held with a Japanese man. 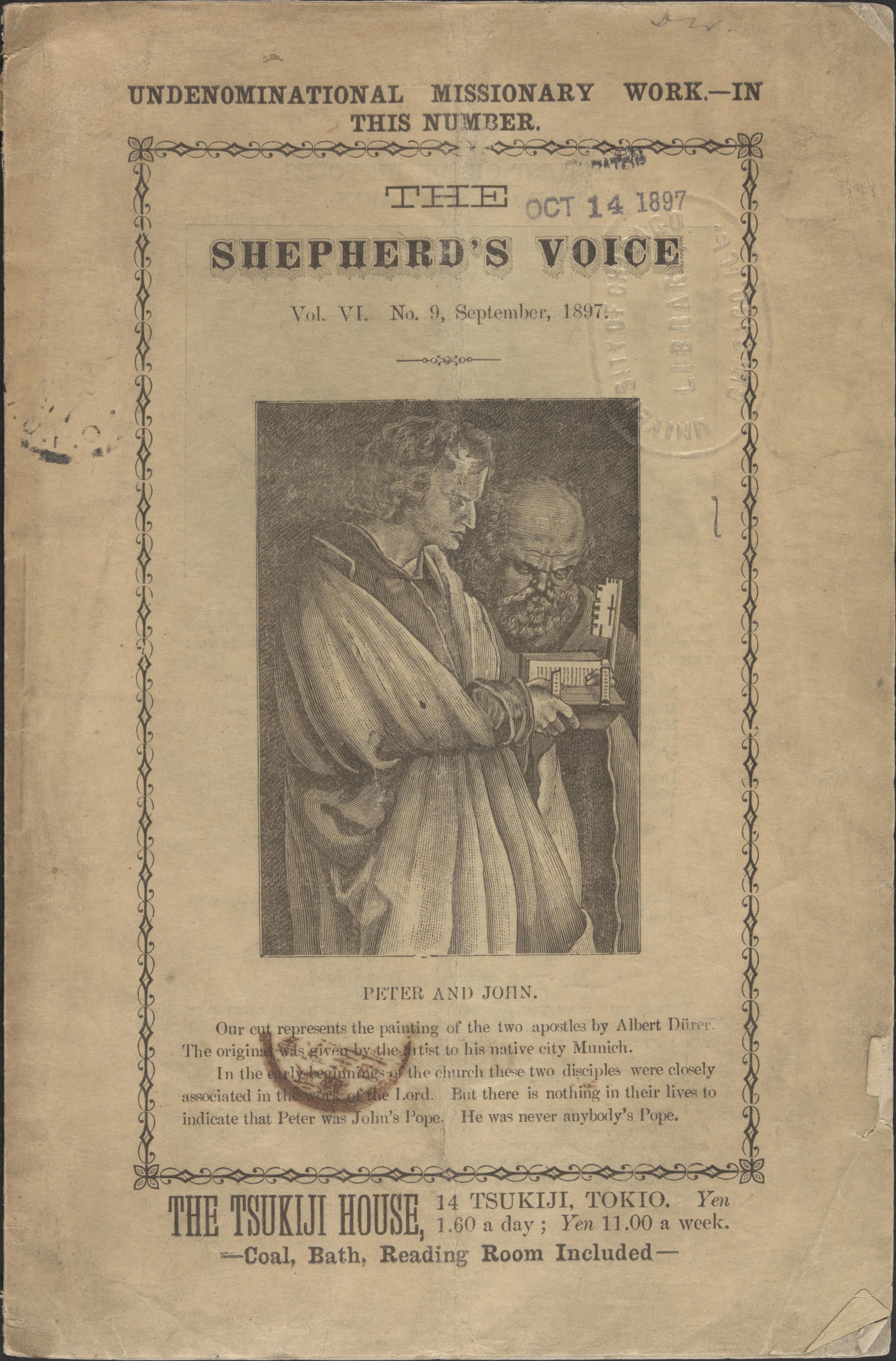 Readers of these few issues of this scarce periodical will find several more similar comments, plus items of news and notes about happenings among Churches of Christ in Japan.  Historians of missions and missiology, students of intellectual and social history, and anyone interested in the history of Churches of Christ will find these issues of The Shepherd’s Voice a welcome addition to their palette of source material.  We thank The Burke Library at Union Theological Seminary, Columbia University in the City of New York for partnering with us to make these rare issues available online.  Burke holds the original issues. The Shepherd’s Voice, with one issue from volume 6 (September 1897) and six issues from 1898, is the newest addition to our growing collection of digitized print materials pertaining to Churches of Christ, currently with over 500 books, tracts, pamphlets from across the Stone-Campbell movement available online.  Additional materials on DigitalCommons.acu.edu about this mission include The History of the Kamitomizaka Church of Christ in Tokyo, Japan by Yunosuke Hiratsuka and Bunkicki Iwahashi, Once Traveled Roads, and On The Trail of the Missionaries both by J.M.McCaleb.