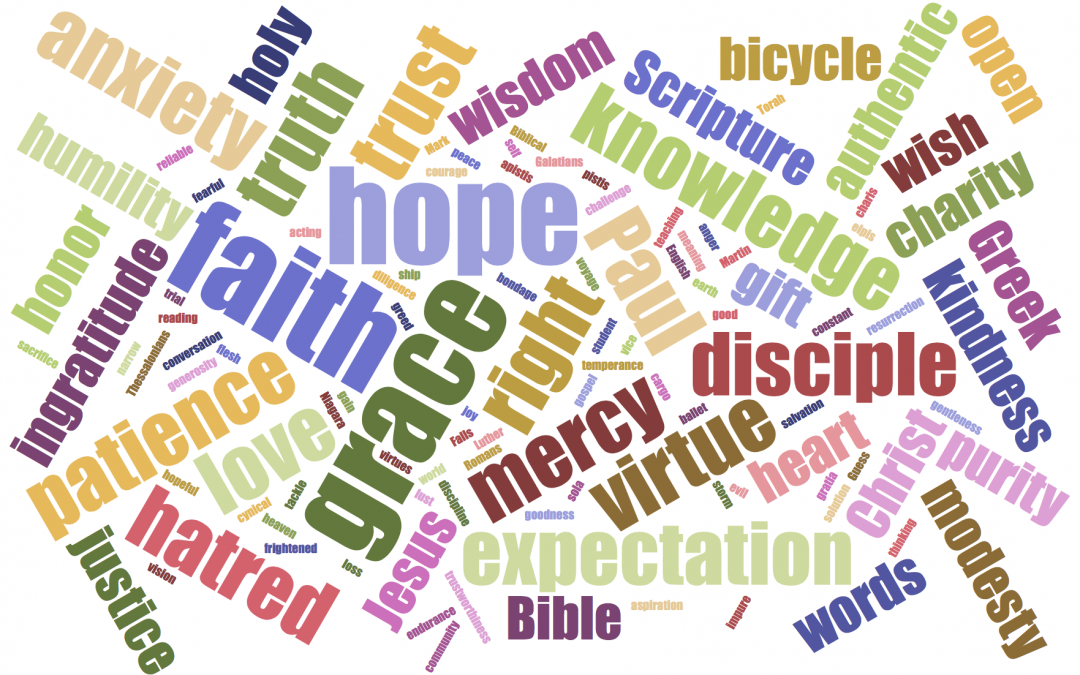 Mark 9:14-29 is one of the longer healing stories in the Gospels. It tells a tragic story about a self-destructive boy and his worried father. From childhood the boy had been driven by a demon to kill himself. In desperation the father brings him to Jesus and his disciples. The disciples try, and fail, to cast out the demon, but the father will not give up. If we pick up the story in Mark 9:20 -27 we see how it is possible both to have faith and confess we also have unfaith.

The point of the story is Jesus’ urging the father to keep faith in him, even after these painful failures with the disciples, insisting that faith will overcome all obstacles. “I do believe,” the father says. “Help my unbelief!” (Mark 9:24). The father confesses that he finds such great faith hard and that in fact he does not have it—he needs Jesus’ support.

I know this word “faith” [πίστις] is used in many other contexts, but the most common use, I suggest, is in religious talk. The English word “faith” is a perfectly legitimate translation of the Greek word and in some contexts is the best. For instance, in Galatians 3:23 I take “the faith” to refer to the Christian belief in Jesus. But many times, a better English word to use would be the term, “trust.” It is an equally legitimate translation and I find some advantages to using “trust” rather than “faith” in most biblical passages. First, “trust” exists in both noun and verb forms in English, like in Greek, but “faith” does not. Instead, we have to bring in the word “believe” when we want to translate the identical Greek verb. We do not say “I faithed in him or her,” but change to a different English root: “I believed in him or her.” Although one of my ambitious teachers tried to get students to adopt this version (“faithed”), to no avail.

Secondly,“trust” is a more personal, relational term, which seems better when we are talking about a person—Christ. To say I have “faith” in Christ can be personal, of course, but too often it only refers to the ideas about Christ that I accept as true, not the person of the Savior. We often talk about “trusting” someone (or not trusting them), but we do not often talk in the same way about having faith in someone. One of my teachers, Lee Keck, wisely said, “It is a lot easier to believe in Jesus than it is to trust him.” But when life brings difficulties or health is uncertain, it is more important and helpful to trust Jesus than to believe certain truths we confess about him.

Thirdly, “faith” tends to be seen as absolute, having two options only: “Do you believe in Jesus or not?” But in my own experience my trust in God has its ups and downs. On some occasions I feel that I fully trust God, but on other, more difficult occasions my trust wavers and I look for other supports also. Thus the term “trust” recognizes that our relation to Christ is not simple, but always changing.

There is a story of a man who stretched a long wire across part of the Niagara Falls and was going to ride across on the wire on a bicycle without tires. As part of the event’s promotion he asked the crowd if they thought he could do it. One man shouted out his support and said, “I absolutely believe you can!” The bicyclist asked him, “Do you really believe I can?” The man responded, “Yes, absolutely.” The bicyclist replied, “Great, then get on behind me!”

I think this understanding of “faith” fits very well with the story in Mark. The father, like many of us on occasions, feels that he wants to trust this preacher, yet to do so his trust must increase. But, most importantly, he perseveres in his trust.

In fact, the Lord himself was concerned about persistence in his followers. In Luke 18:8 he says, “When the Son of Man comes will he find faith on the earth?” Will Jesus be looking for “belief” in him or personal trust? His question remains a challenge to all disciples.