Over the summer one of our projects was to complete cataloging for a small collection of Christadelphian titles we recently acquired.  Tracing origins to John Thomas, the Christadelphians began in the United States but emerged with vigor in England in the later 19th century.  The movement shares restorationist strategies for Biblical interpretation, and eschews traditional theological formulations of the nature of Jesus Christ, Unitarianism and the Trinity.  Thomas’ earliest controversy centered on the practice of rebaptism.   With his closest family and circle of influence, he chided Alexander Campbell for his stance toward the unimmersed. The Campbell-Thomas exchange gained notoriety through a series of letters between Alexander Campbell and “a sister from Lunenburg [Virginia].” 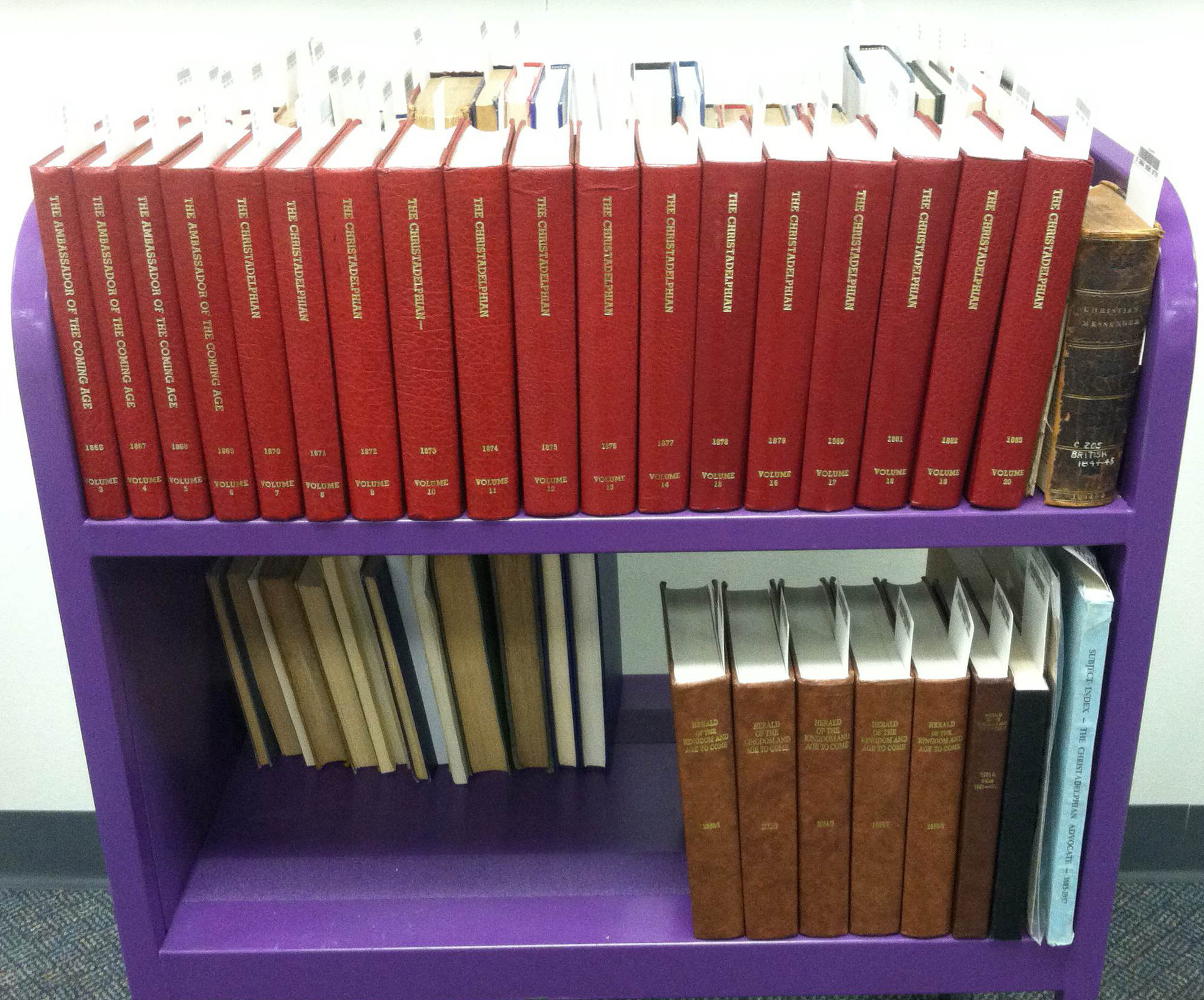 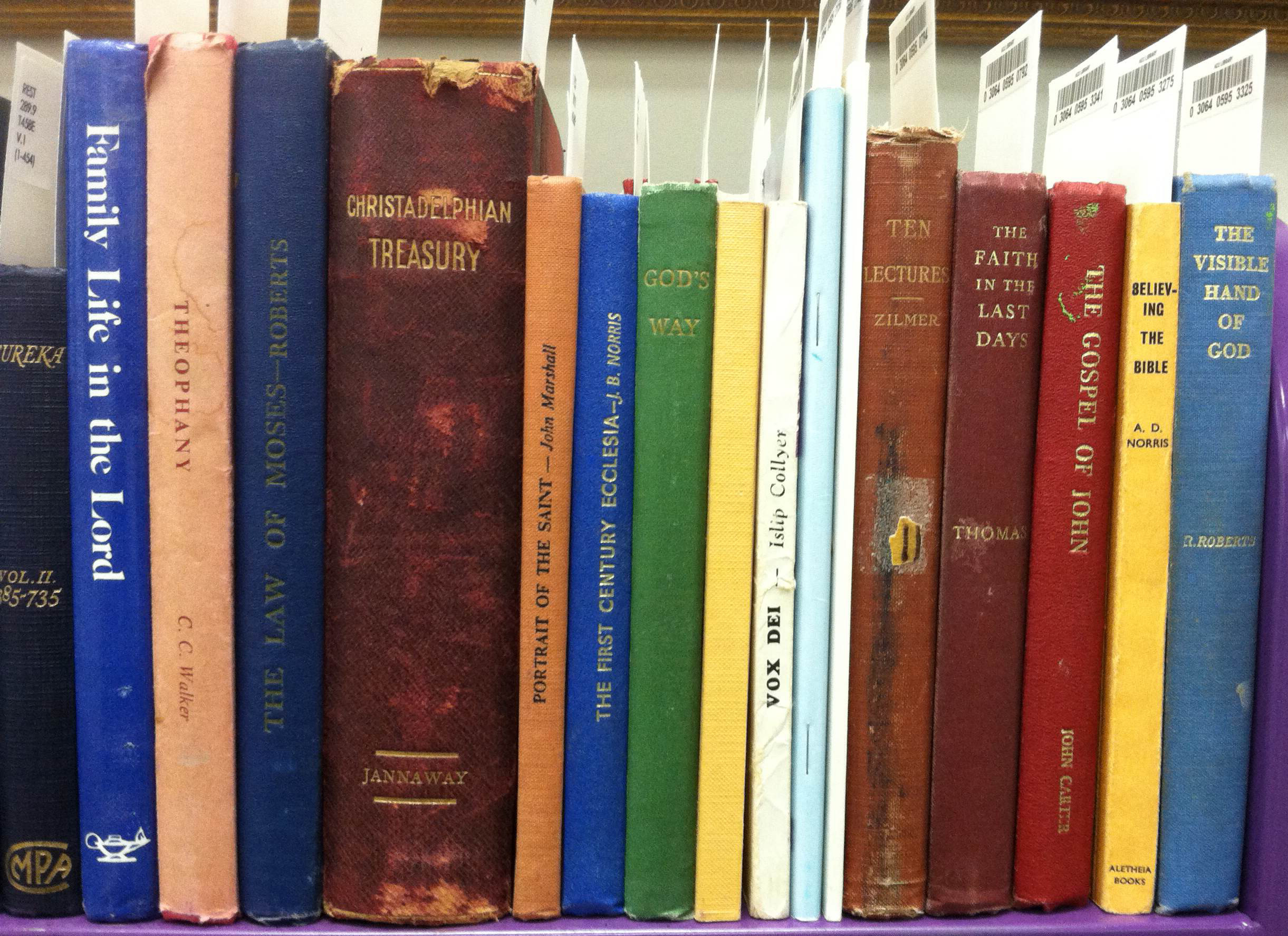 The theological rationale for Thomas’ positions found expression in print: monographs, periodical literature, tracts, and pamphlets.  The materials we acquired include primary sources such as Thomas’ seminal work Elpis Israel, substantial runs of periodicals such as The Christadelphian and Herald of the Kingdom and The Age to Come, and an assortment of materials by and about Thomas’ chief protege Robert Roberts.  Pictured here are the books and periodicals, fresh from cataloging, and ready for the shelf.  Still in progress are dozens of tracts and pamphlets and loose periodical issues. 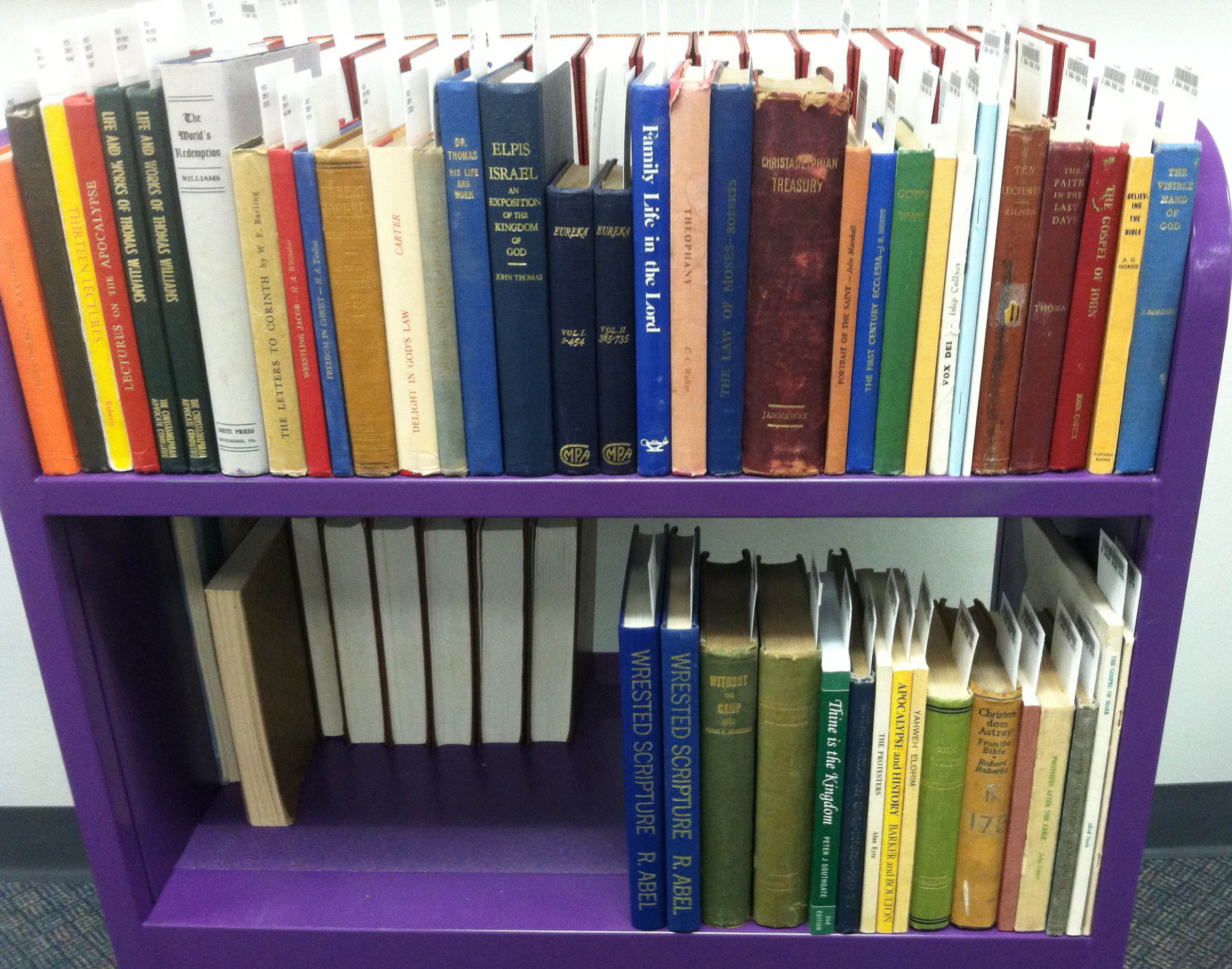 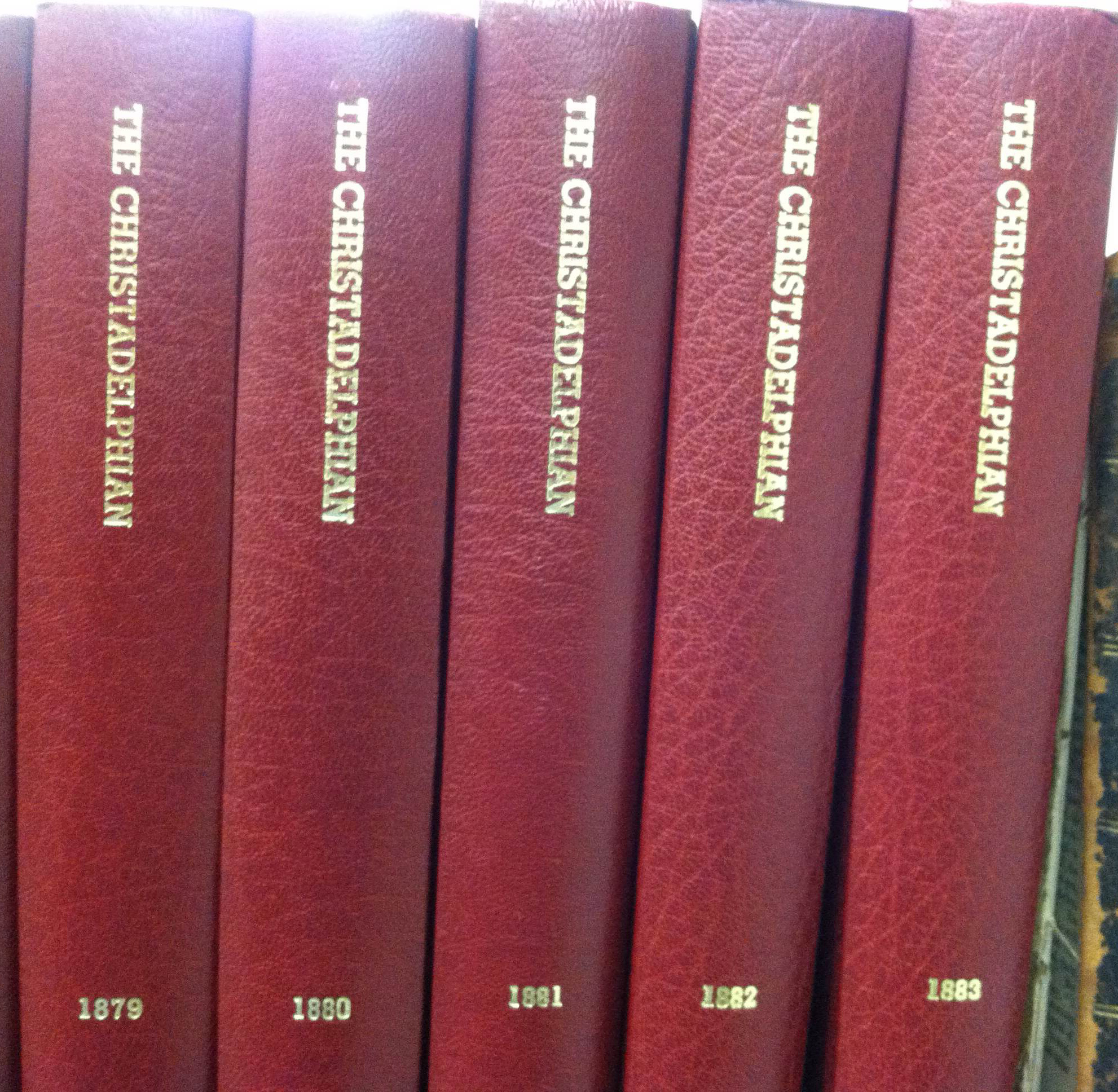 The addition of these materials to our collection affords our researchers opportunity to more broadly and deeply explore the issues at play in the Stone-Campbell and related movements.  It is another step forward in building our collections to better serve our users…they are on the shelf and ready for use. 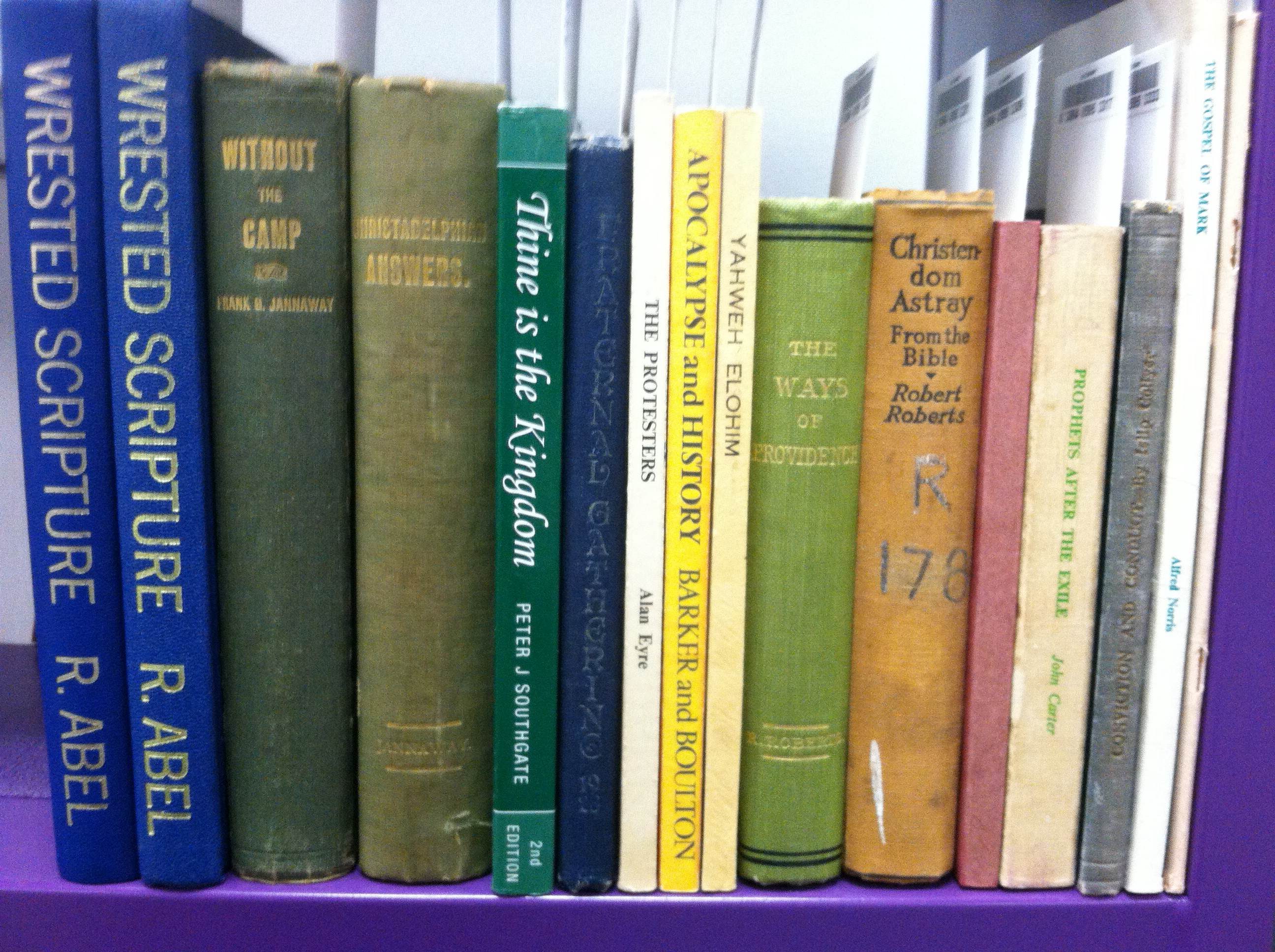 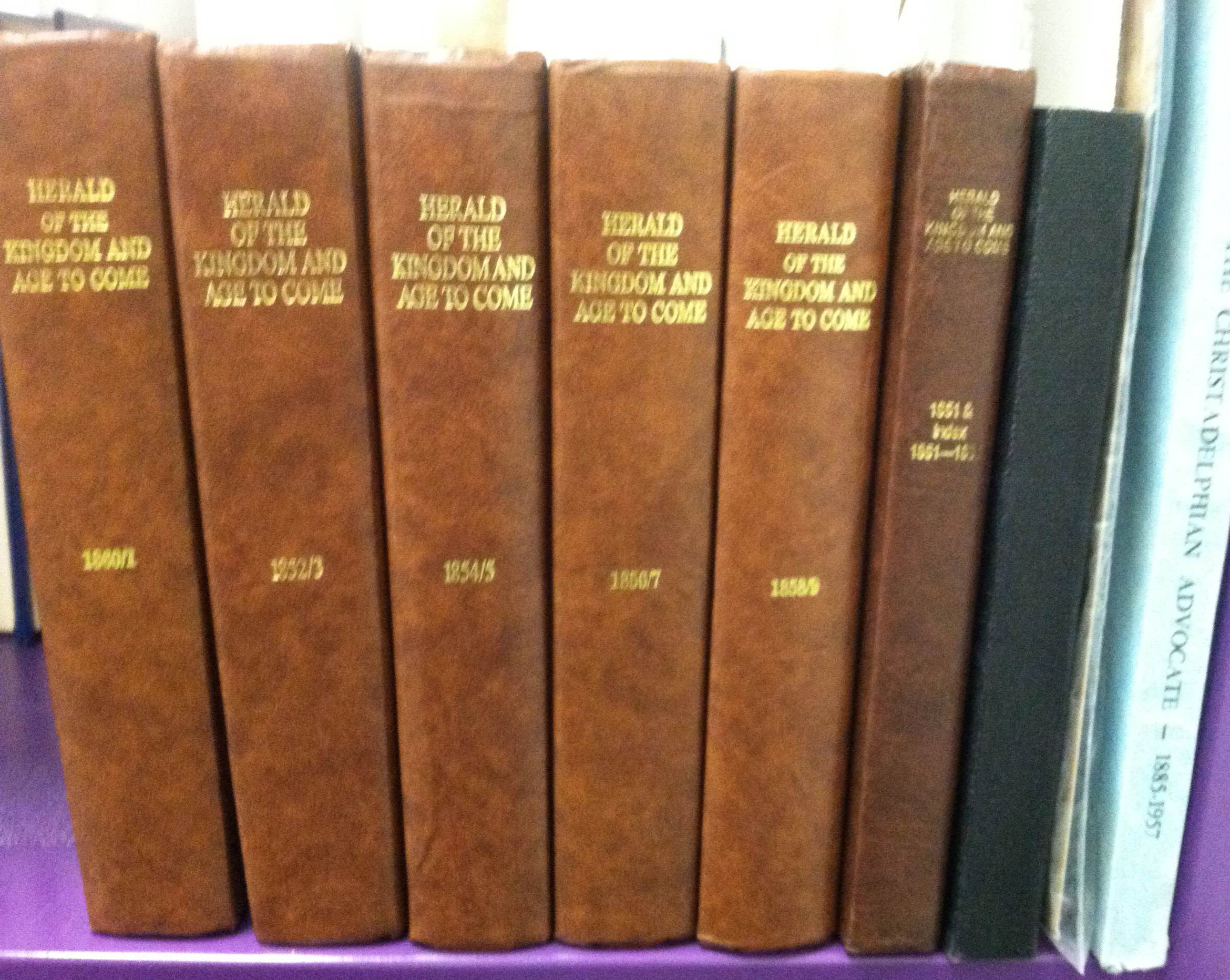 Here is a list of some of these items, just in, and ready for research:

Believing the Bible / by A.D. Norris.

Christadelphian Answers on all kinds of difficulties, objections, arguments and questions … By well-known Christadelphians. Compiled …by F.G. Jannaway.

Christendom astray from the Bible.

Conviction and Conduct. The faith that works.

The Devil : a Biblical exposition of the truth concerning “that old serpent, the devil and Satan,” : and a Refutation of the beliefs obtaining in the world regarding sin and its source / [Epps?].

England’s ruin : John Smith’s answer to Mr. Blatchford’s plea for socialism as contained in the widely circulated book, Merrie England : the subject considered from a Bible point of view.

God’s way : a restatement of the full Christian gospel / by John Carter.

The Gospel of John. An analytical study.

The gospel of Mark : a systematic comm. with contributions from the other gospels.

Prophets after the exile / by John Carter.

A Souvenir of a Memorable Fraternal Gathering in the Town Hall at Birmingham, Whitsuntide, 1928. [With plates.].

“Thine is the kingdom” : the message of original christianity / Peter J. Southgate.

The visible hand of God, or, The miracles, signs and wonders which have occurred in the past dealings of God with the nation of Israel : the nature and design of such operations and their necessity to the accomplishment of the work of God in the earth / by Robert Roberts.

The ways of providence as authentically illustrated in Bible history: with three chapters on the overthrow of the Jewish commonwealth by the Romans, and the destruction of Jerusalem by Titus / by Robert Roberts.

Without the camp : being the story of why and how the Christadelphians were exempted from military service / by Frank G. Jannaway.

Yahweh- Elohim : a devotional study of the memorial name / by E.J. Lasius.

6 thoughts on “This Just In: Christadelphian titles added”