Alexander Campbell (1788-1866) was born and grew up in Northern Ireland. In 1807, his father Thomas Campbell (1763-1854), a Presbyterian minister, emigrated from Northern Ireland to western Pennsylvania and sent for the rest of the family to join him in 1808.  Shipwrecked on the western coast of Scotland, the family spent a year in Glasgow before joining Thomas in 1809. During that time Alexander studied at the University of Glasgow. In 2019 I set out to visit the places in Ireland and Scotland that are the backdrop for this crucial year in his life. Travel with me as we retrace his journey in three posts: the Homeland, the Interruption, and the University of Glasgow. 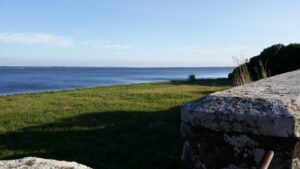 Jane Corneigle Campbell, Alexander’s mother, had grown up in that area, the only child of a widowed mother. Nearby was Shane’s Castle, a beautiful lake estate with a park where Alexander played as a child. When Alexander was little, his family moved south of the lake to Sheepbridge, where Thomas preached as a probationer.

Sheepbridge was in County Down on the old Belfast road about seven miles north of Newry, Thomas’s family home. Several members of Thomas’s family, including his brother Enos, are buried in Newry at the churchyard of St. Patrick’s Church of Scotland. 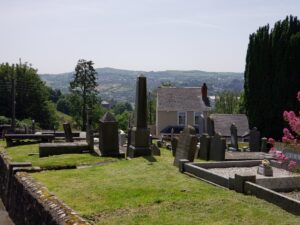 About the time Alexander was old enough to go to school, Thomas moved the family to County Armagh to Market Hill to work with churches in that area and to teach for families there.  Alexander attended an elementary school there. He also attended an academy in Newry taught by his uncles Archibald and Enos Campbell. During this period Thomas avoided involvement with political groups in County Armagh during a time of extreme political tension and armed skirmishes between rival Protestant and Catholic militias.

Thomas received an invitation from the Governor, Lord Gosford, who admired his peaceable ministry, to move to the Gosford estate near Market Hill as a tutor to his family, with a residence and salary. Thomas declined because he did not want his children to learn to admire a wealthy lifestyle. 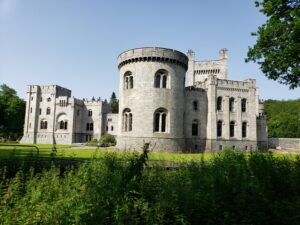 Gosford Castle near Market Hill, home of  Arthur Acheson, the Earl of Gosford, the governor of Armagh at the time.

As Alexander approached his teens, his father supervised his education. In 1798, Thomas accepted a call to the Ahorey Presbyterian Church and moved the family about five miles north of Market Hill to a farm in what is now the village of Hamiltonsbawn, a few miles closer to the Ahorey church. Alexander thrived on farm work and outdoor sports and began to develop as a scholar. 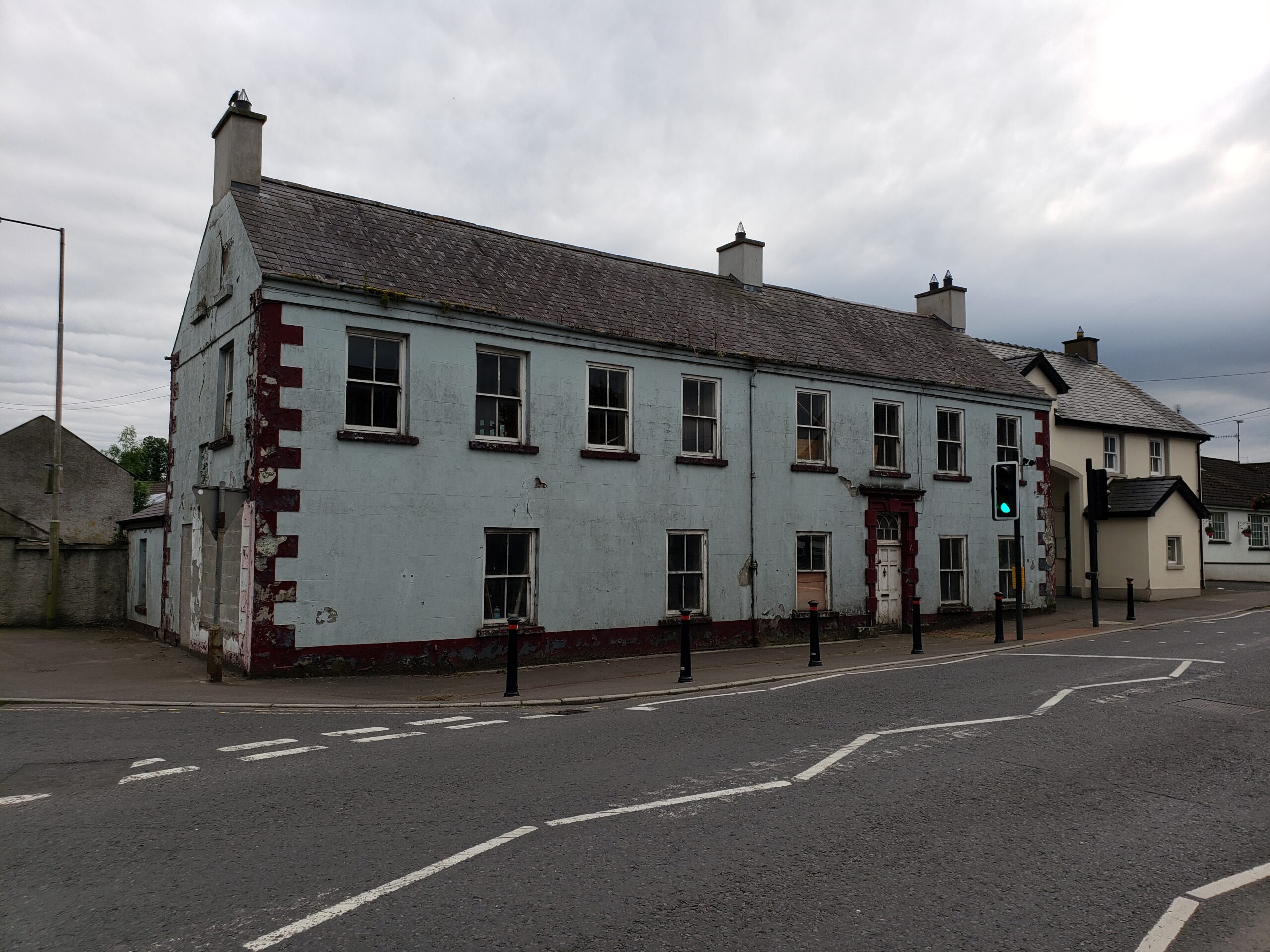 Also in 1798, Thomas helped found the Evangelical Society of Ulster, begun in Armagh as an interdenominational association to support Bible literacy and gospel preaching. This affiliation proved to be a problem with his Presbyterian supervisors, who insisted he withdraw his membership two years later. At the same time, he was involved in efforts to reconcile two Irish Presbyterian factions. 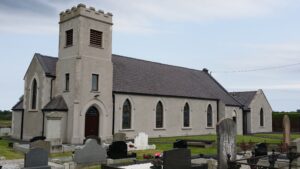 When Alexander was about seventeen, Thomas decided to start a school in Rich Hill to supplement his salary as the pastor of the Ahorey church.The family moved to a house across the town square from the castle of William Richardson, the High Sheriff of Armagh, and brother-in-law of Lord Gosford. Alexander assisted his father in the school, which became successful. 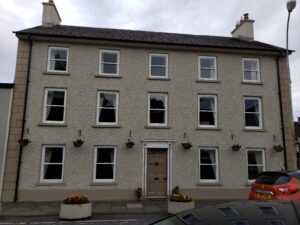 Campbell family home and school in Rich Hill, on the main square.

On Sunday evenings, when the Ahorey church had no services, Thomas and Alexander frequently visited the Independent congregation in Rich Hill, where they occasionally heard visiting ministers connected to the independent evangelical movement in Northern Ireland, England, and Scotland. That meeting house is at the bottom of the hill just below the Rich Hill square where the Campbells lived. 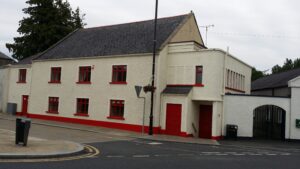 Meeting house of the Independents in Rich Hill, below the square.

Thomas, his health worn out by his work, decided to relocate to the United States and emigrated in 1807. Alexander managed the Campbell school and helped his mother with his younger siblings. He became the tutor to the young daughters of the Richardson family in the castle just across the Rich Hill square. 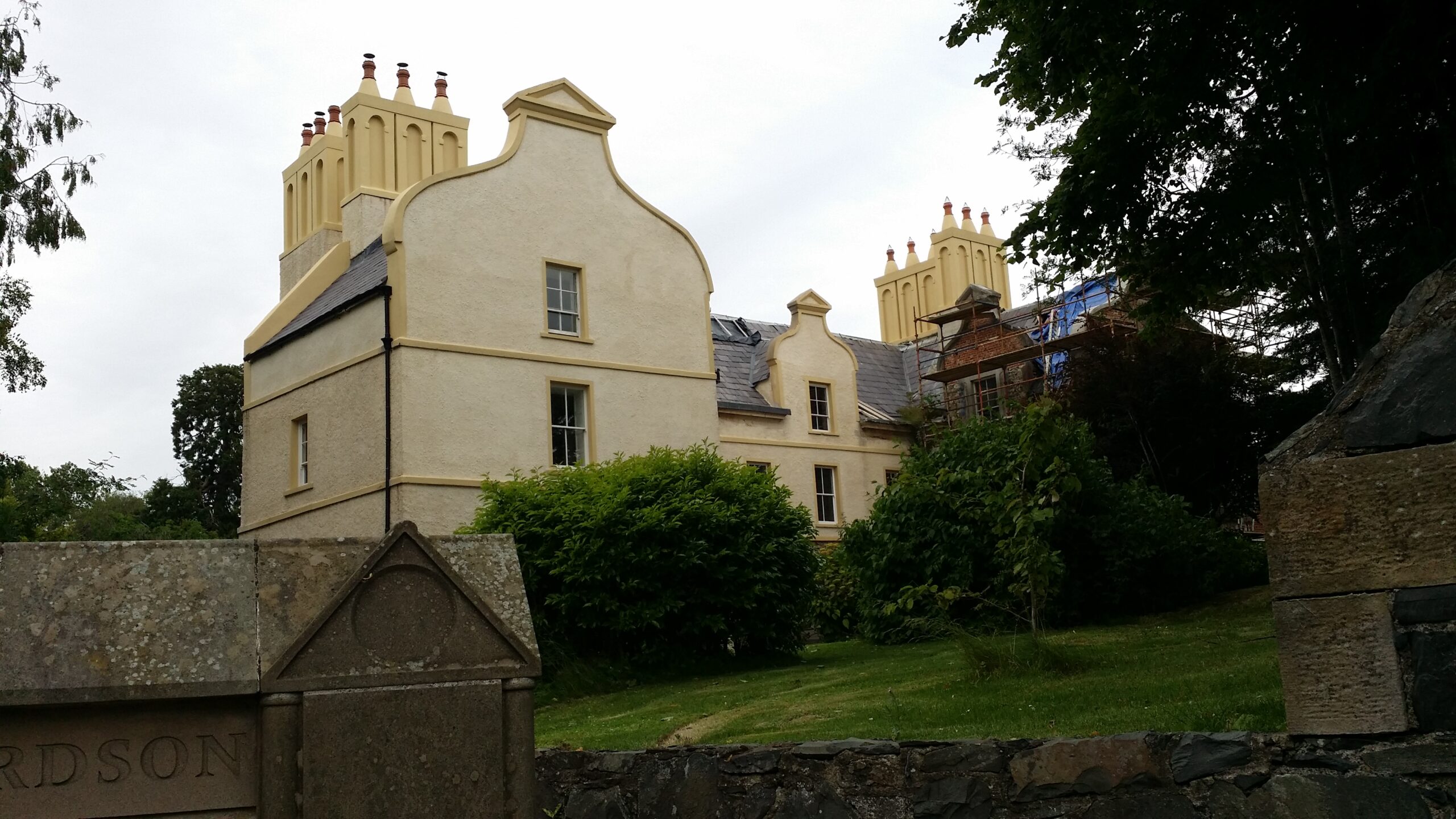 The following year, Thomas, having secured a job with a presbytery, sent for Jane and their seven children to sail to meet him in Washington, Pennsylvania. The letter dated January 1, 1808, arrived in March. They began to get ready to leave, but their departure was delayed when smallpox swept through Rich Hill. By the time everyone in the family had recovered, it was late in the sailing season. In September Alexander went to Londonderry in the northwest of Ulster to arrange their tickets, admiring the old walled city, its history, and its buildings. 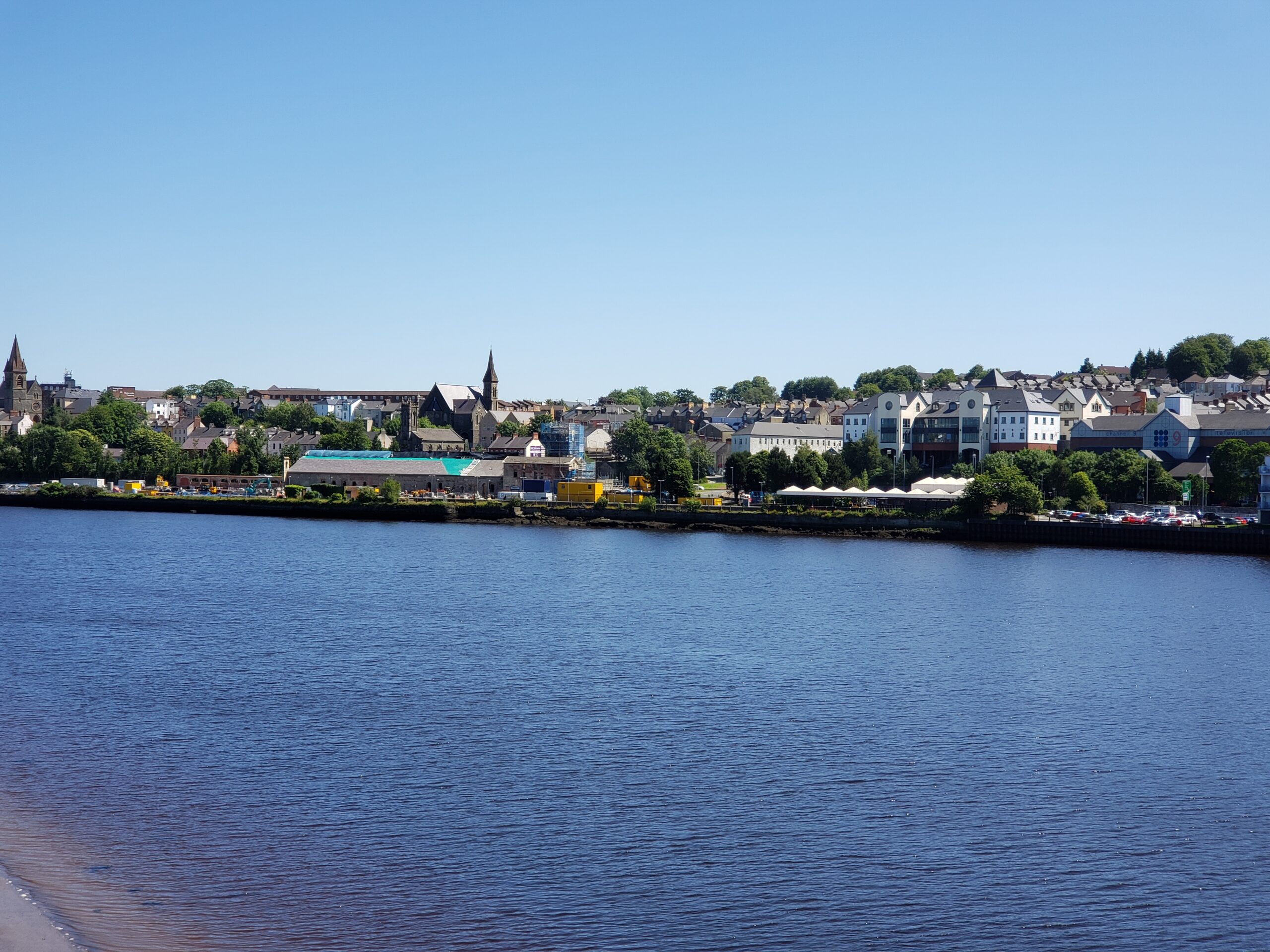 Londonderry Waterside district on the east side of the River Foyle.

When the time came, the family traveled for four days to the port of Londonderry to embark on their voyage to America. Their ship, the Hibernia, sailed on the first day of October, 1808, bound for Philadelphia. It never arrived.

NEXT: Part 2: The Interruption (coming soon)

Open-Access photographs selected from my trip retracing Alexander’s journey to Glasgow are available for free download at ACU’s Stone-Campbell Teaching Archive for use in teaching. Read more about the Campbell family and Alexander’s life in Memoirs of Alexander Campbell by Robert Richardson (Philadelphia: Lippincott, 1868).

3 thoughts on “Traveling with Alexander Campbell to Glasgow: Part 1 – The Homeland”