Cornerstone Spotlights are a tradition. Once a week during the fall semesters, freshmen at ACU have packed into Cullen Auditorium to hear a member of ACU’s faculty give a talk about their respective field of study. The Learning Studio has been intimately involved from the beginning, helping structure, design and film each presentation, and preserving them online for later viewing.

[Watch: What is Cornerstone?]

The talks, called Spotlights, have long represented the largest weekly course gatherings on campus—a polished, professionally produced experience in which virtually every ACU student from the past decade has participated. But auditorium lectures aren’t very pandemic-friendly, so this year the Learning Studio needed to help Cornerstone adapt, without losing the engaging and dynamic ethos that has always characterized the live talks.

In filming sessions before and during the semester, Learning Studio staff filmmakers Matt Maxwell and Nathan Driskell, along with Cornerstone Director Trey Shirley, met with Cornerstone faculty and produced each of their talks direct-to-camera, packaging them with a uniform look and feel that included custom graphics and animations.

Each of this year’s 11 Cornerstone Spotlights is available to watch online. 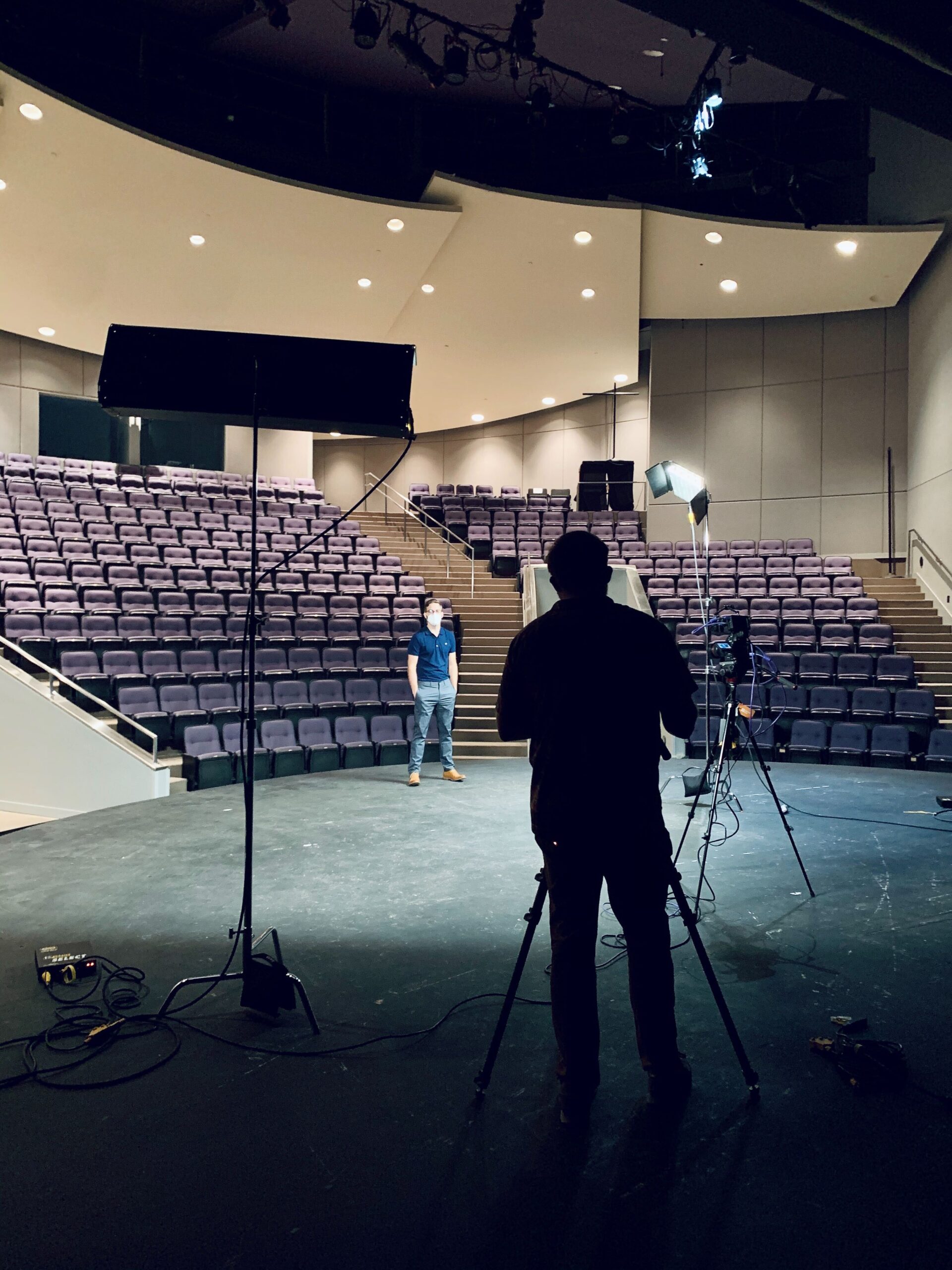 [This week the Learning Studio’s Nathan Driskell contributed a story to the ACU Today blog that we wanted to share.]

Six short films, representing months of work by more than 50 ACU students, were destined for a Paramount Theatre screening at the ACU FilmFest gala in early April. But when classes moved online in response to the coronavirus pandemic, so did FilmFest.

On April 23, the gala, which typically draws a full house at the historic Abilene theatre, instead screened online during a specially produced livestream, premiering the year’s student film submissions in the first event of its kind in FilmFest’s 16-year history. The planning began in the Learning Studio, which has worked with FilmFest since 2011, but it soon included the help of staff and faculty members across the university to produce the 90-minute live broadcast.

An ocean away, documenting a rare discovery on camera

In 2017 Joe Stephenson, who’s a Culp Distinguished Professor of English at ACU, discovered a never-before-seen play from the 1600s in the archives of the Boston Public Library titled The Dutch Lady. Stephenson, who wrote his dissertation on Dutch characters on the English stage, had never seen or heard of the play, and he could find no record of it in any prior scholarly works. He quickly realized he had made a once-in-a-lifetime discovery.

Two years later, Globe Education, a division of Shakespeare’s Globe Theatre, exhibited the play as a performance for the first time as part of its Read Not Dead series, which exhibits rare plays as stripped-down performances with minimal production.

The 2019 reading of The Dutch Lady took place at Gray’s Inn in London, the very place where Shakespeare’s Comedy of Errors was first performed more than 400 years earlier. The Learning Studio’s Kyle Dickson and Nathan Driskell were there to capture footage of the performance and rehearsals, as well as Joe Stephenson’s lecture on his research into the history and suspected provenance of the play. They were also able to conduct on-camera interviews with global experts from The Shakespeare Birthplace Trust and The Shakespeare Institute.

The resulting short video gives audiences both at ACU and around the globe a chance to travel to London with Joe, and to witness a moment that would only ever happen once: the unveiling of a historic play that, in its 400-year existence, had never before been performed by actors in a live setting.

Over Spring Break, a small team from the Learning Studio traveled to New York alongside ACU students and faculty in the departments of Art & Design and Theatre, to document their experiences on film. The result is a series of three short videos we’ve titled “ACU in New York” that show prospective students the high caliber of experiences these programs offer beyond the classroom.

Your Story Starts Here: A look behind the scenes

Since 2011, the Learning Studio has offered ACU students and faculty the tools, spaces and training necessary to share your story with the world. We keep our gear, facilities and tutorials up-to-date so that your next project can have the same polish as the pros.

We wanted to make it easy to get to know the resources we offer at the Learning Studio, so we decided to do what we do best: We made a video.

It may seem simple, but this one-minute video really involved our whole team in its creation, along with several student actors, and seven film shoots over the course of four weeks.

We started with a script, storyboarded the whole thing using Adobe’s great mobile tools on iPad Pro, and then we rounded up our actors and gear and started filming. We edited the finished product using Adobe Premiere Pro, along with After Effects for motion design.

Do you have a story idea? Develop it with us here at the Learning Studio. Our media staff is available every day at the Learning Studio’s front desk if you need help or get stuck. And if you’re just getting familiar with what we have on offer, you can check out our Start Page for a quick rundown.