In 1924 Earnest C. Love issued a slim paperback song book containing the “oldest and sweetest songs in print.”  It is one of over 3,000 items in our Austin Taylor Hymnal collection and is the only institutionally-held copy known.  It is available for download here. 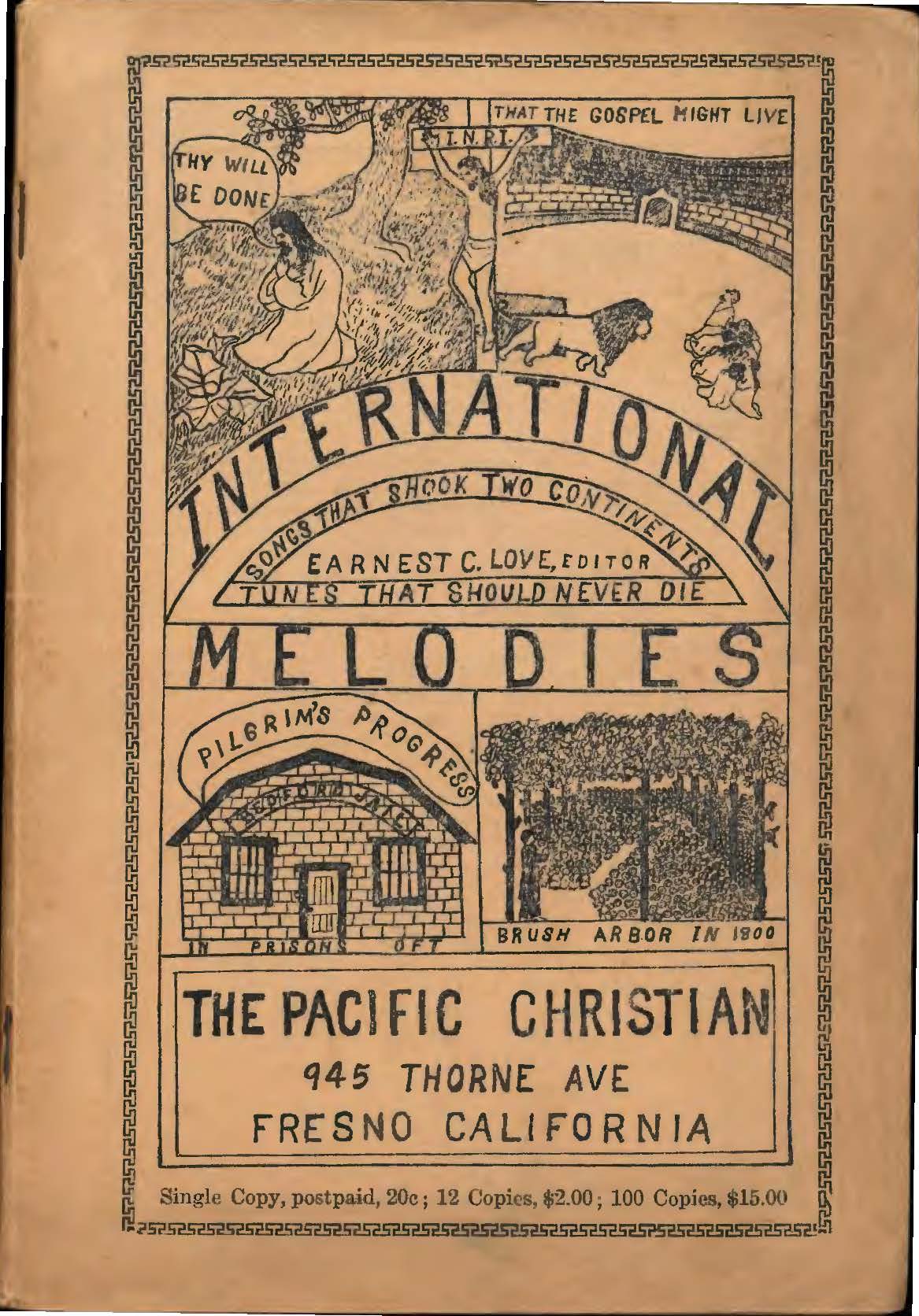 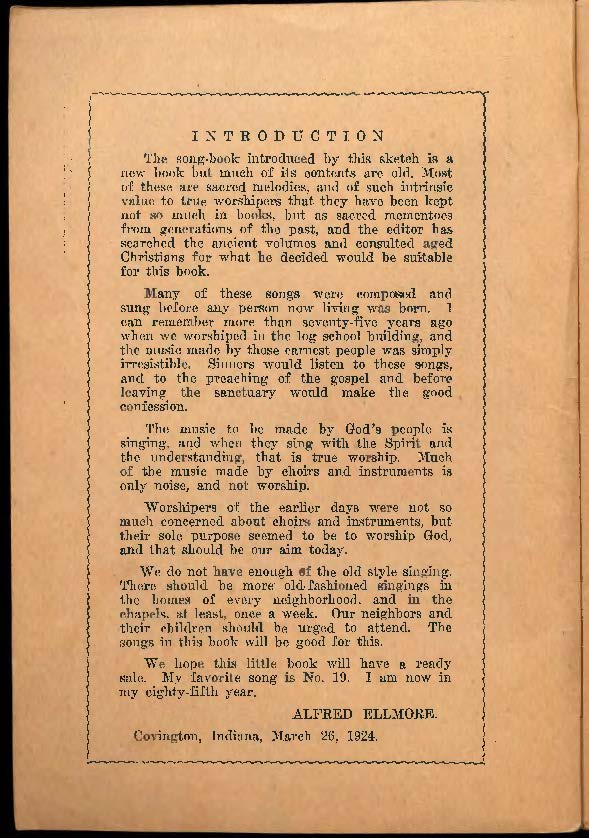 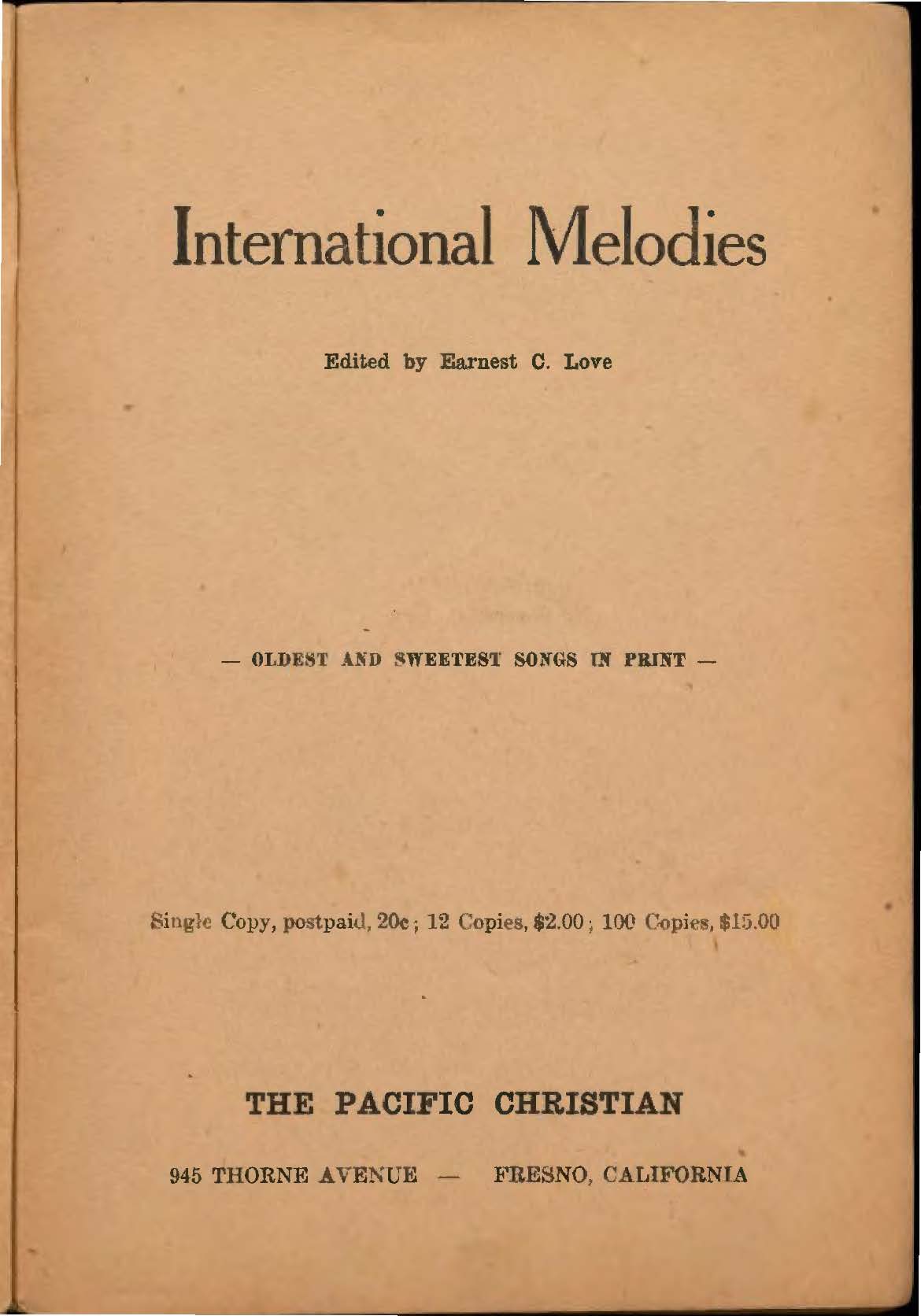 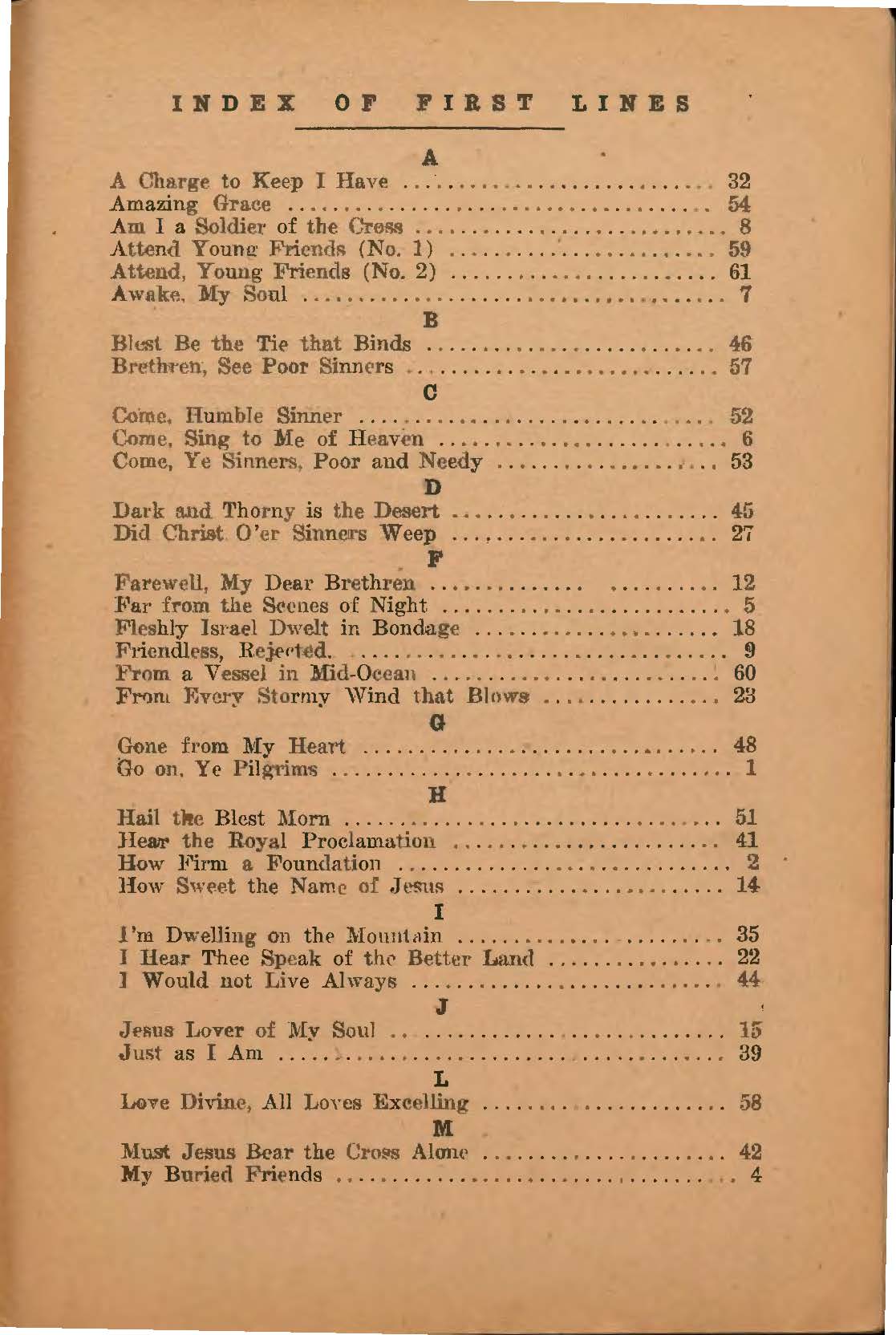 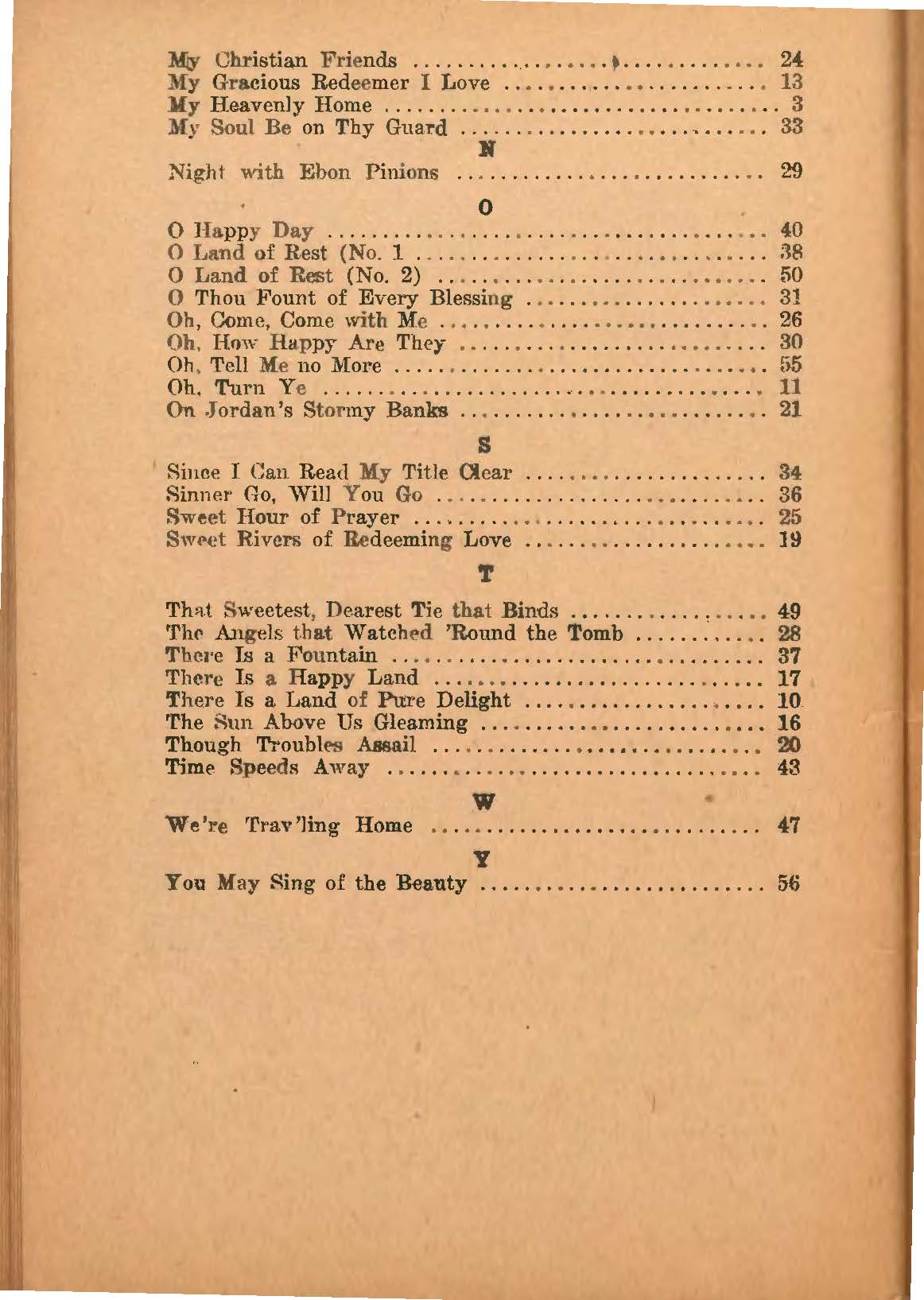 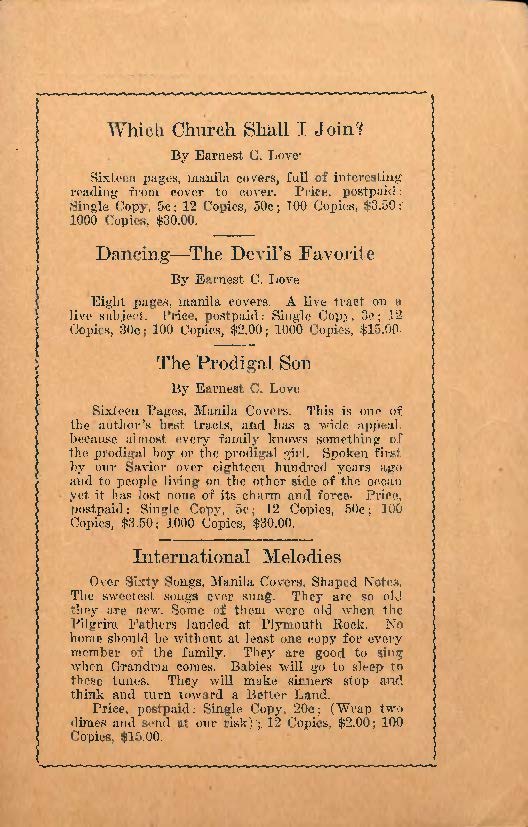 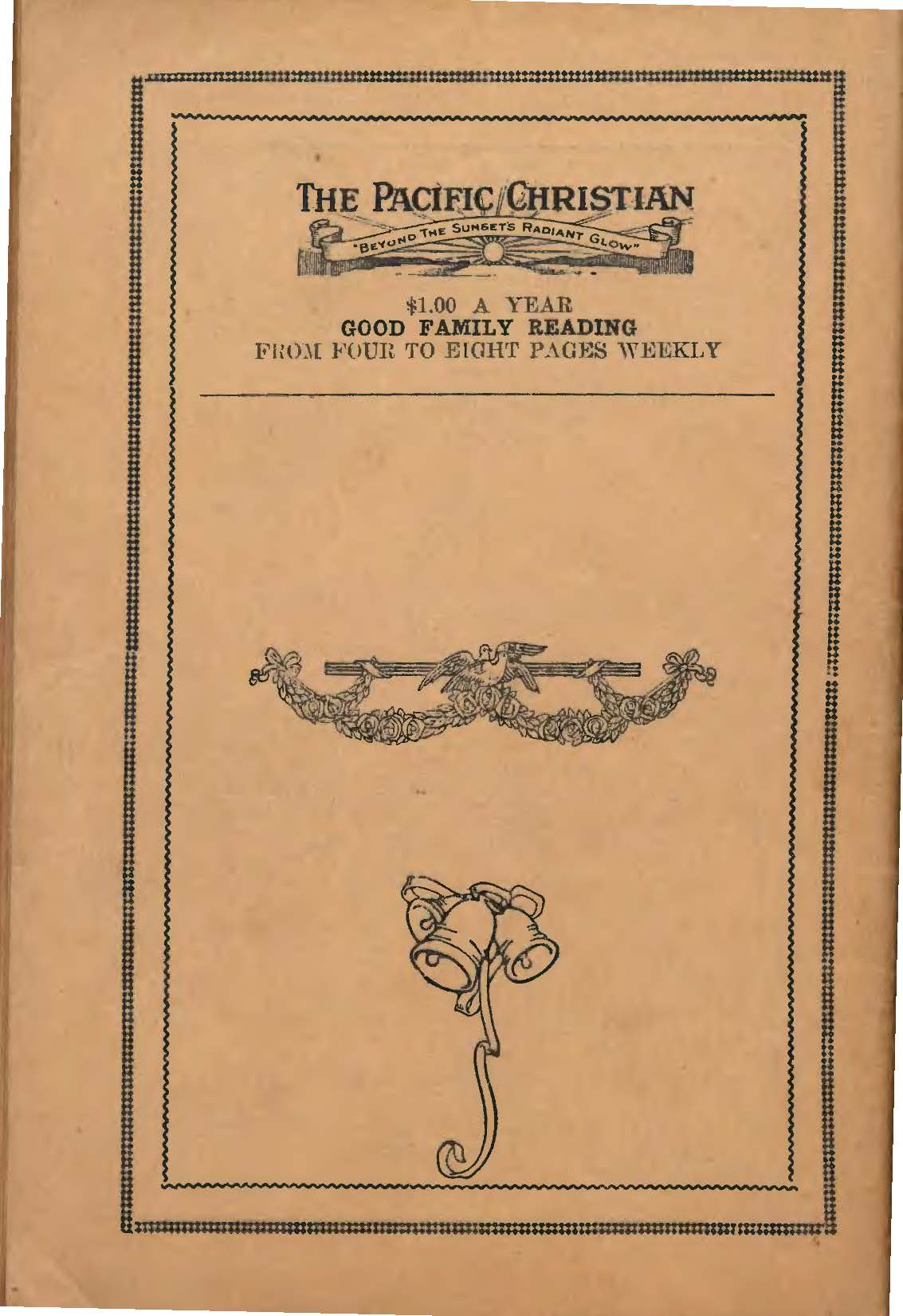 Likely no other hymnal shaped Churches of Christ in the 20th century like Elmer Leon Jorgenson’s Great Songs of the Church.  He issued the first edition in 1921, made a few changes here and there before issuing a revised edition in 1937 (Great Songs #2).  The #2 revision was issued in round and shaped notes under the imprint of Great Songs Press (Chicago), World Vision Publishing Company (Nashville), Chronicle Publishing Company (Abilene), and Standard Publishing Company (Cincinnati) before Abilene Christian College acquired the book in the 1950s.  In 1943 Jorgenson issued a slim paperback book for use in gospel meetings: Great Gospel Songs for Tent and Tabernacle.

Over the years, many, many people remember singing from ‘old blue’ (or was it red?, or green?).  Yes.  It was blue, and red, and green. 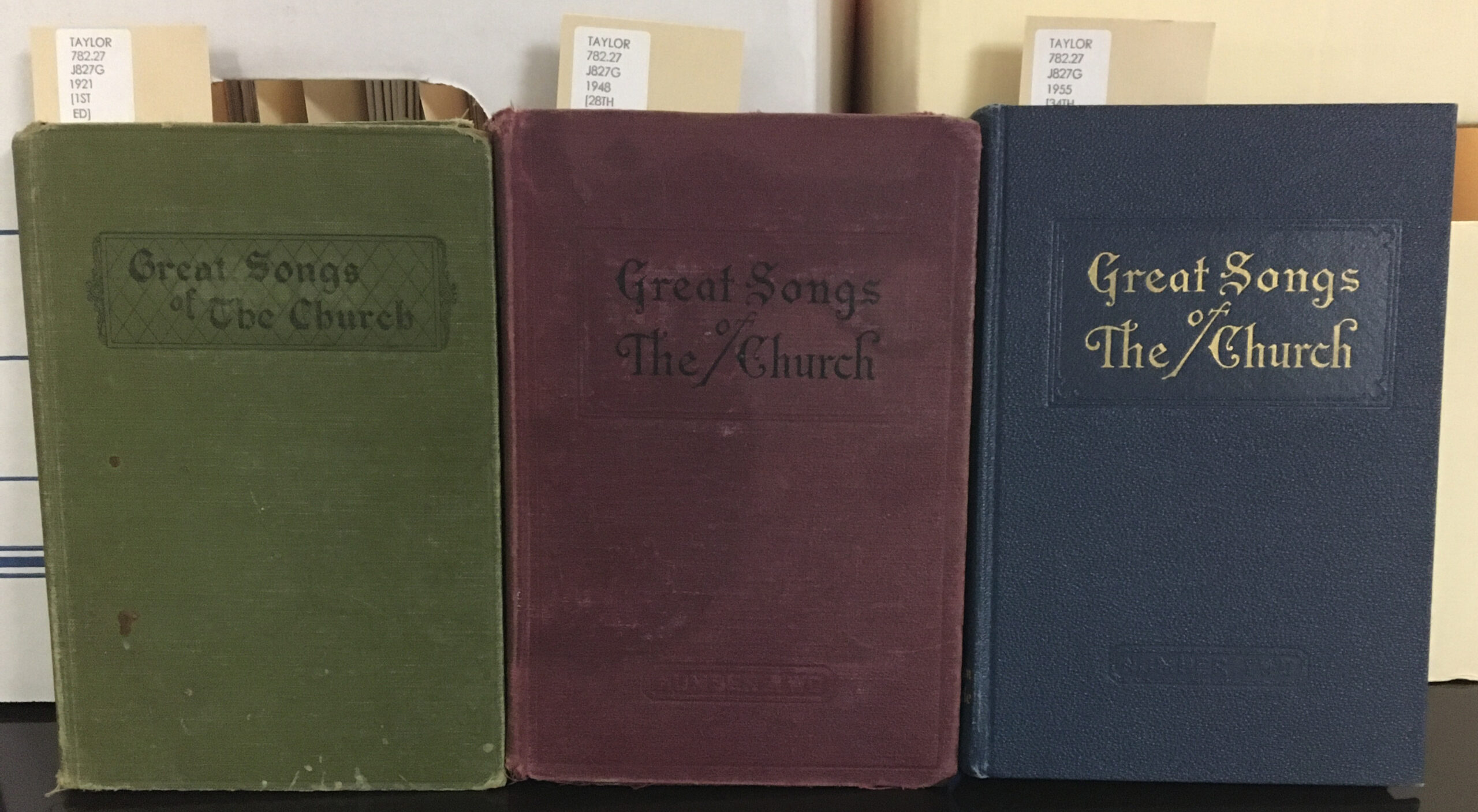 We have many editions and printings of Great Songs, but we do not have a full set. 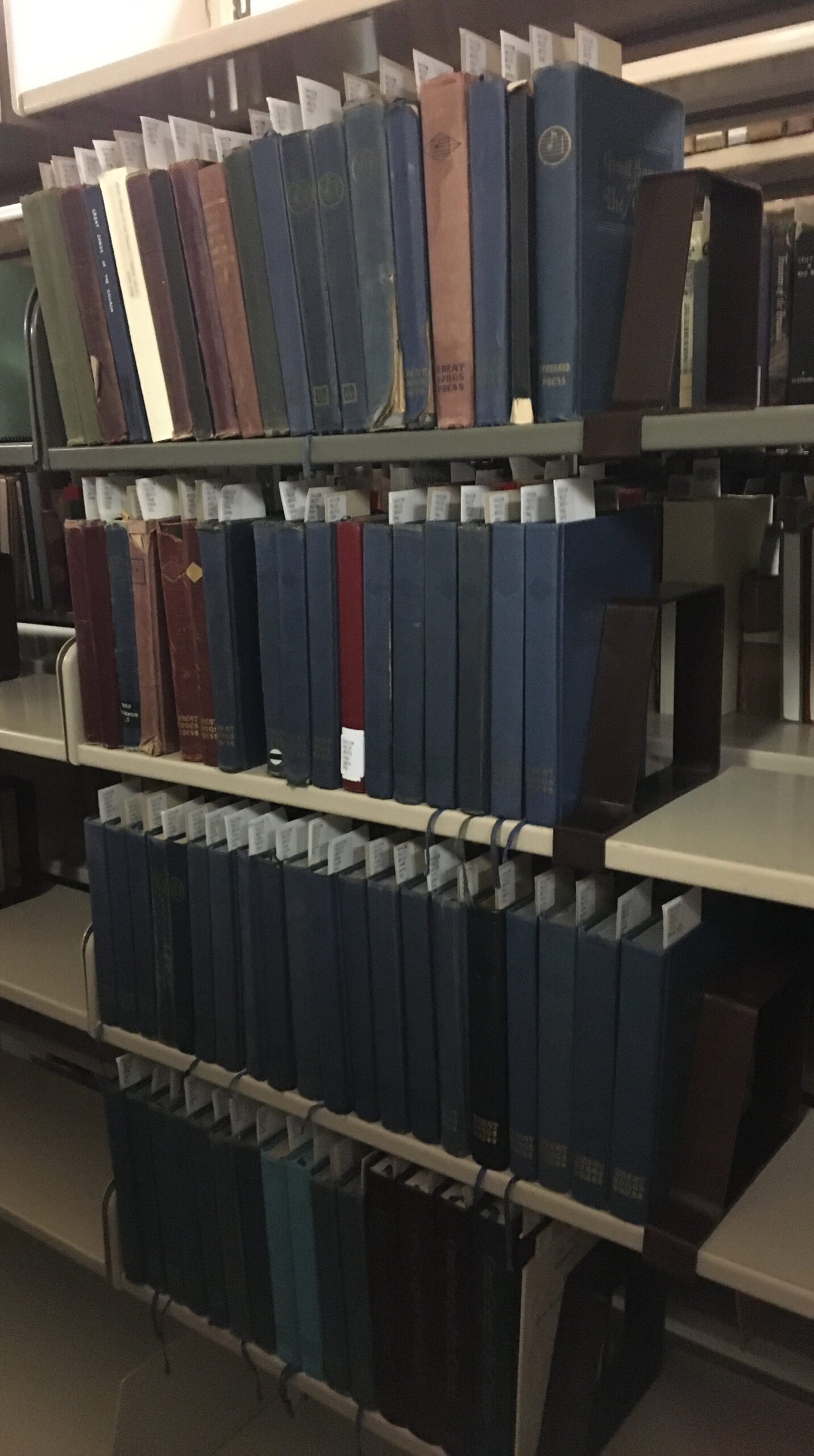 Great Songs of the Church

Here is brief list of the copies we hold:

In 1986 ACU Press issued a through revision. We have copies of this revision both as a stand alone hymnal and as part of a commemorative set with Forrest McCann’s book, Hymns and History. This set was issued as one of the ACU President’s Circle limited editions.

In 1975 Abilene Christian College issued a supplement to the hymnal, which we also hold. Dr. Jack Boyd, Director of Choral Activities at ACC at the time, oversaw production of a set of long-playing records to accompany this supplement. Side 8 includes Jack Boyd speaking on teaching new hymns to the congregation. This digital file consists of Dr. Boyd’s lecture.

However, in the 1940s, E. L. Jorgenson issued sets of records, produced out of Chicago using members of Chicagao-land Churches of Christ as singers. We do not have these records, and would very much like to locate them. 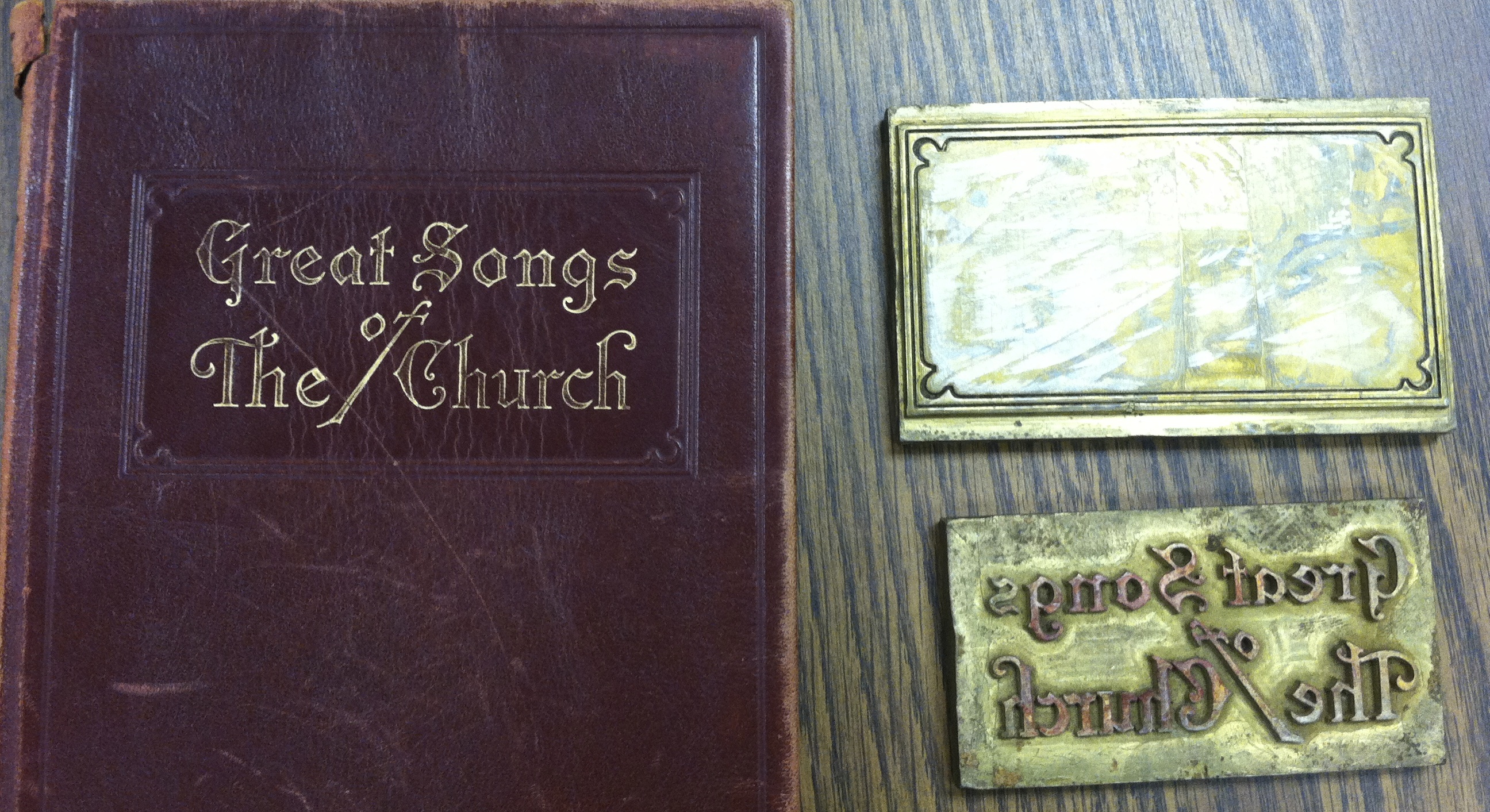 My appeal:  we should assemble as quickly as possible a full complete set of Great Songs of the Church.  It was a monumental hymnal, an achievement on behalf of Churches of Christ unequalled in its time for its scope, breadth, depth, and quality of songs.  And it shaped generations of singers and worshippers.  Take a second look at the photo of the shelves above.  Just the fact that it was issued so many times indicates the demand for the book sustained, on average, one printing per year for over fifty years.  The sheer number of printings is itself a testimony to its wide use.  I would like to assemble a fine set of at least two excellent condition copies of each printing, by each publisher.  Great Songs is a remarkable book, and we should preserve a remarkable set.  A full set will serve any kind of research inquiry into this book for decades and decades to come.  Can you help us us achieve this goal?  Will you please check your shelves for copies we lack?  Contact Mac Ice at mac.ice@acu.edu to help preserve this slice of history. 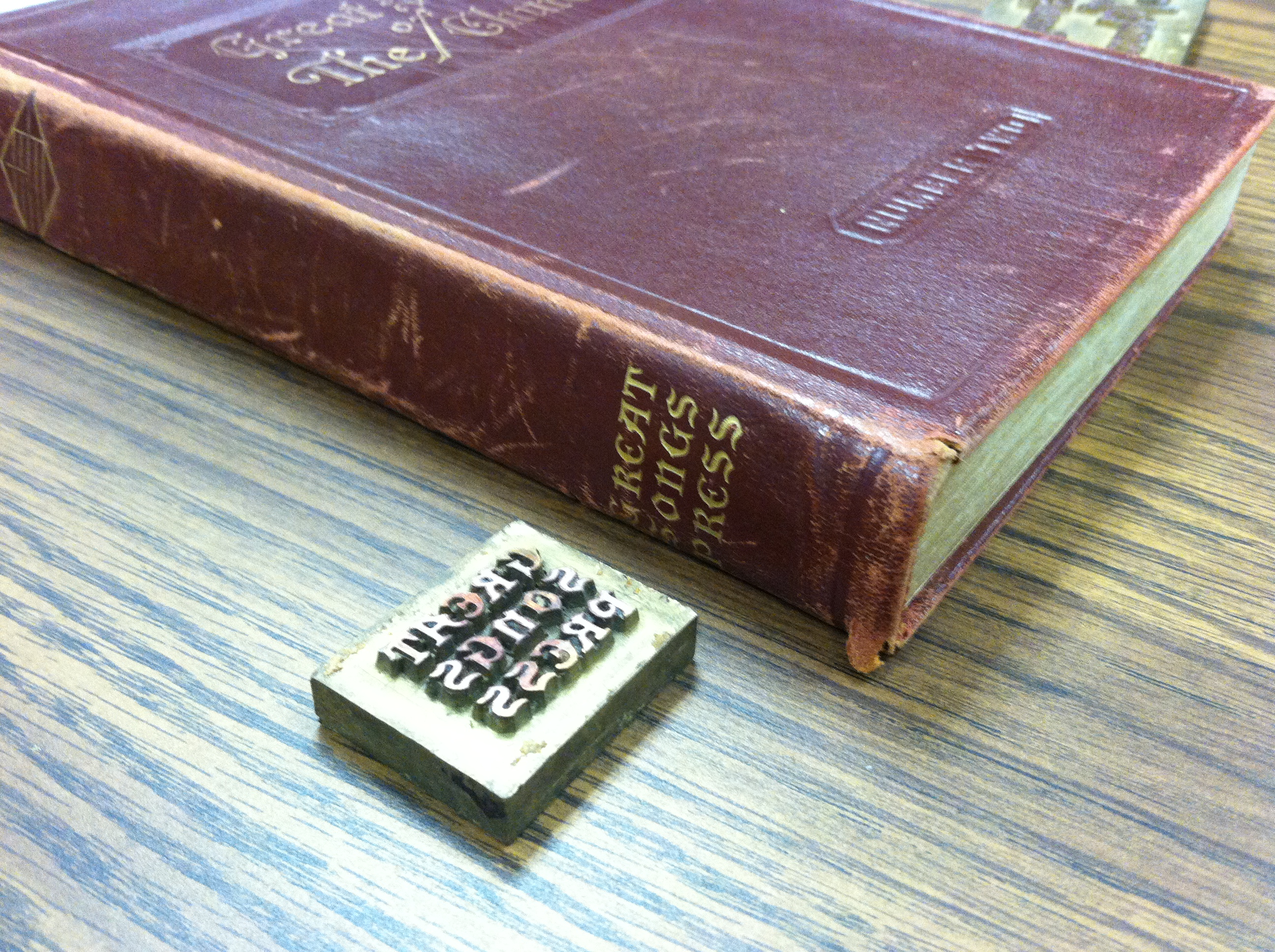 In 1949 Otis L. McCoy edited and published His Glory in Song, a slim booklet, staple-bound, of 156 songs in about 100 pages.  According to WorldCat, we hold one of two known copies of this book, which is why a researcher contacted us.  Ours is catalogued and on the shelf in the Austin Taylor Hymnal Collection.  Interested in researching hymns and hymnody?  We would like very much to assist.  Let us know when we can serve you.