Among the remarkable items in the Joe Johnson Collection of American Christianity is this post-card sized handbill advertising…in its “twenty-second week”…what is likely the longest sustained evangelistic effort in Stone-Campbell history. Theophilus Brown Larimore by 1894 engaged in such meetings on a full-time basis. He was in demand for them because of his ability to communicate clearly, forcibly and persuasively. 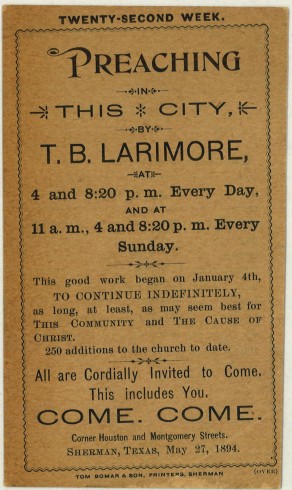 While weeks-long meetings were not unheard of (and commonplace among some evangelists) this effort by Larimore is an outstanding example of the stamina on the part of all concerned. In 2014 we marvel that audiences sustained his effort, and that he was able to maintain such a rigorous schedule (twice daily and three times each Sunday).

I’ve heard it said Larimore remarked that he did not repeat a sermon during these six months. In the larger story of Churches of Christ, this meeting held far-reaching effects, for during it Larimore persuaded a young man to become a Christian. Batsell Baxter, a boy of seven years, was baptized during this meeting.