August 4, 2017 Abilene Christian University Special Collections staff participated in the US National Archive’s Twitter Hashtag Party. The featured hashtag for the party was #ArchivesSquadGoals. We brought to the party this 1953 photograph of the “Ping pong champs” at Ibaraki Christian College and queried if anyone was up for a match:

Here are the 1953 ping pong champs from Ibaraki Christian College in Japan. Anyone up for a match? #ArchivesSquadGoals @USNatArchives pic.twitter.com/Vorv3M298F

The US National Archives quickly put the ball back in our court with this tweet:

Be sure to check out Twitter on September 1 to see what the National Archives has going on for the next Archives Hashtag Party! To see more photographs from Ibaraki Christian College, search the ACU Digital Commons page here.

Track and Field with ACU’s Bobby Morrow (1957-58). This reel of news stories about college track and field meets focuses primarily on Abilene Christian College’s Bobby Morrow competing at meets in 1957 and 58. The stories capture scenes from the West Coast Relays in Fresno in 1957, the Texas Relays in Austin in 1957, and the American Business Club Relays in Big Spring in 1958. Throughout, Morrow and the ACC relay team that also included Bill Woodhouse, James Segrest, and Waymond Griggs consistently break records. Among other footage of big names in track and field are scenes of Morrow racing Duke’s Dave Sime in 1958; Morrow and Sime were constant rivals for the title of “Fastest Man in the World.” Although they had both beat each other previously, in this race, Sime wins by a foot and a half. 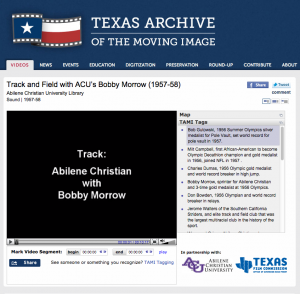