J. W. Roberts Papers, 1946-1972, MS#25 [Revised Finding Aid]
Born in 1918, J W Roberts began preaching in 1938 as a senior in high school. He attended Freed-Hardeman College from 1936-38 and Abilene Christian College from 1940-42 where he received a M.A. in religious education. Preached in Iraan, Texas, 1938-40; Wichita, Kansas, 1942-45; Indianapolis, Indiana 1945-46; and Perrin, Texas. He preached two summers for the Graham Street Church of Christ in Abilene and two summers for Pepperdine University and Great Lakes Christian College. He was Religious Emphasis speaker at Washington State College in 1963 and Texas A&M in 1964. Roberts was director of Graduate Studies for Bible and Religious Education at Abilene Christian College from 1963 until his death in 1973. He was heavily involved in the Boy Scouts of American for more than 20 years and was a deacon for the College (now University) Church of Christ in Abilene. He also served as moderator for Otis Gatewood in a debate in 1942. He wrote or co-wrote multiple books and commentaries. These papers include a collection of seminar notes, correspondence, course syllabi, gnostic library, septuagintisms, trips, commentaries, reports, articles, research, personal papers, and notes from J W Roberts.

William Newton Short Jr. Papers, 1948-1997, MS#27 [Revised Finding Aid]
William Short was born on February 23, 1943 in Southern Rhodesia, Africa. Graduated from Gilbert Rennie School, Lusaka, Africa and moved to the United States in 1961. Received a BSW at Harding University and began Graduate Studies at Abilene Christian College before receiving his Masters in French, German, and Spanish from the University of North Texas. Short obtained his Doctorate in Foreign Languages from Rice University. Short was a Professor of Languages at McMurry University for 27 years, teaching French, German, and Spanish. He was the Chairman of Modern Languages and served as a sponsor of the Makona Social Club for almost 3 decades. He served as a member at Minter Lane Church of Christ for over 20 years where he taught Bible classes. He traveled the world as a missionary and teacher, taking trips with Let’s Start Talking Ministries and led many International Studies Abroad campaigns. These papers include a collection of autobiographical stories from experiences in Africa and America from Bill Short. Written in the 1990s, Short’s recollections mainly include childhood memories from the late 1940s and 1950s.

Tillit Sydney Teddlie Papers, 1885-1987, MS#29 [Revised Finding Aid]
Tillit Sidney Teddlie was a singing school teacher, composer, publisher, and minister of the Church of Christ. Teddlie was educated in Southern Development Normal in Waco, Texas, a school for advanced instruction in theory and harmony. He also attended what is now North Texas State University. He composed his first song in 1906. During his lifetime, Teddlie taught singing schools for 61 years, composed 130 songs, published 14 song books, and served as a full-time minister, including the Johnson Street Church of Christ (1945–1951), Central Church of Christ in Greenville, Texas, and Churches of Christ in Ennis, Sulphur Springs, Lone Oak and Quinlan. For two years he sang only with Foy E. Wallace, Jr. while traveling across the country for gospel meetings. These papers include notes, scripture, and sermon notes. 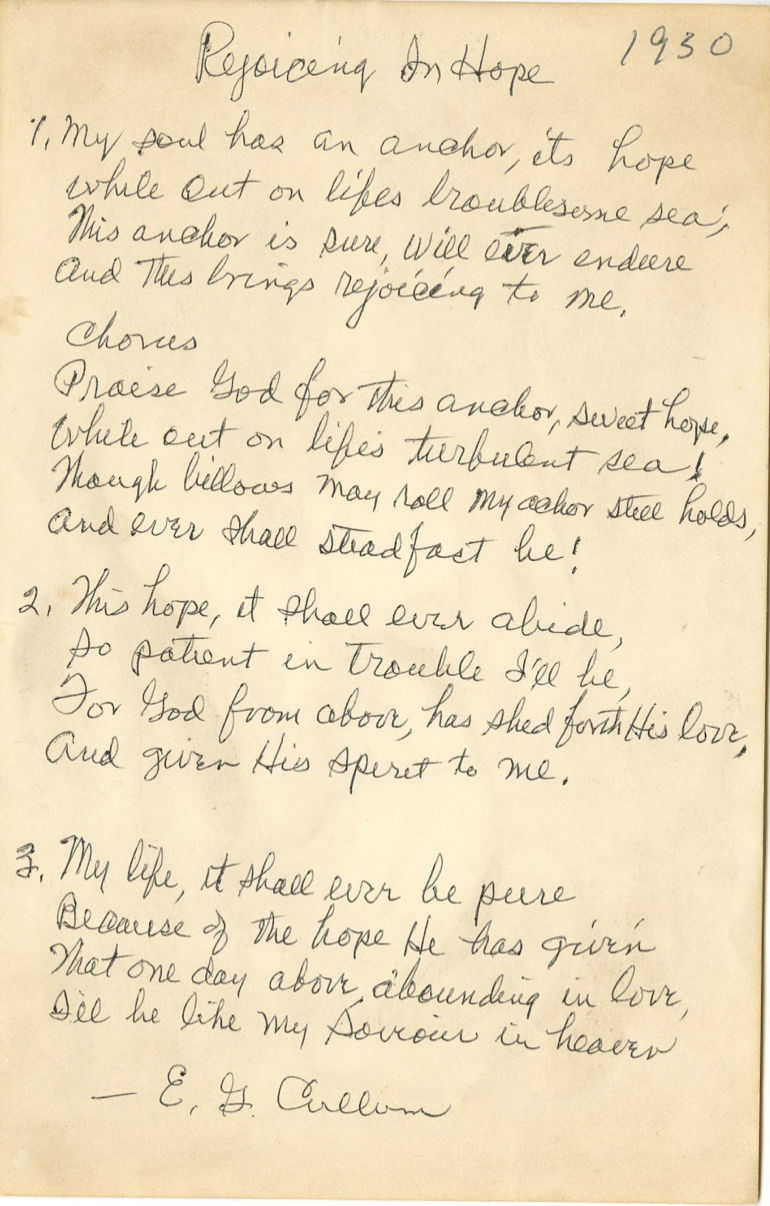 Homer Lee Terry Papers, 1955-1984, MS#30 [Revised Finding Aid]
Homer Lee Terry was born in 1909 in Lindale, Texas. He graduated with honors from Texas A&M in 1936. He began preaching in 1956. The bulk of his preaching occurred between 1956 and 1958 in rural churches in Texas. He preached his last sermon in 1964. This collection contains some of the sermon and Bible class notes of Homer Lee Terry.

David Edwin Harrell, Jr. Papers, 1923-2017, MS#467 [New Finding Aid]
David Edwin Harrell, Jr., was born on February 22, 1930, in Jacksonville, FL. He received a B.A. (1954) from David Lipscomb College, and an M.A. (1958) and Ph.D. (1962) from Vanderbilt University. Harrell served as a professor of history at numerous American universities (1961-2004), finishing his teaching career at Auburn University (1990- 2004). Additionally, he served as a Fulbright Lecturer in India (1976-1977), and as the Director of the American Studies Research Centre in Hyderabad, India (1993-1995). Harrell is a noted social historian of American religious history. His research interests included the Stone-Campbell Movement, Pentecostal traditions, the southern black and white sectarian tradition, and twentieth century American Christianity. Additionally, he wrote biographies of Oral Roberts, Pat Robertson, and Homer Hailey. This collection includes correspondence, presentations, research, and reviews from Harrell’s academic career. Additionally, there are correspondence and reports regarding his work with Churches of Christ.